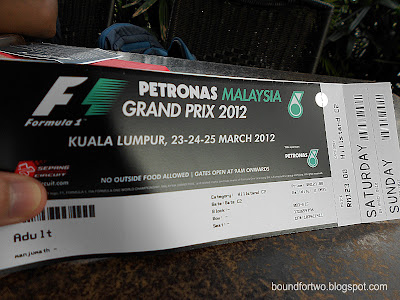 10:40 23/3/2012 It is an every F1 fanatic dream to at least witness the Grand Prix on a live event. It was just a vision that unexpectedly turned into reality.  Not everyone has the opportunity to join this event as it is very expensive. The ticket alone would cost you a fortune. We considered our selves lucky as first timers because we are able to watch the first day of F1 Grand Prix without paying anything. You might be scratching your head why but we will tell you exactly, how this happened.
Our friend Manju fetch us around 10:40, had a quick breakfast in his favorite restaurant and drive all the way to Sepang International Circuit, the venue of Malaysian F1 Grand Prix 2012. It is approximately 60 Km south of Kuala Lumpur.

Along the journey, we only talk about cars, drivers, championships, best F1 pit stop team, and best Grand Prix Circuit. Manju did also share his story, passion and how many times he attended this event. I am a big fan of F1 race( watching on TV) but this guy is exceptional. He went to Malaysian Grand Prix three times and one in Indian Grand Prix. Now joining with us, it will be his fourth time in Malaysian Grand Prix. 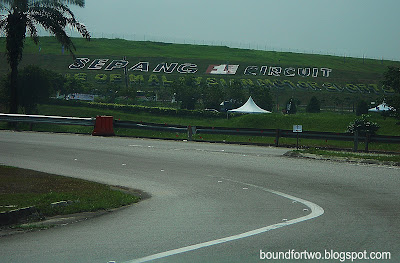 We didn’t notice the time we spent on the road while talking about F1. We had already reach Sepang International Circuit as we saw the landmark sign at the entrance.


By Bus: Riding KLIA Coach from KL Sentral which stops at the KLIA Main Terminal. Then get a transfer to Sepang International Circuit via Taxi or Sepang Omnibus


By Train: Taking KLIA Transit or KLIA Ekspres both stops at KLIA Main Terminal. Then get a transfer to Sepang International Circuit via Taxi or Sepang Omnibus 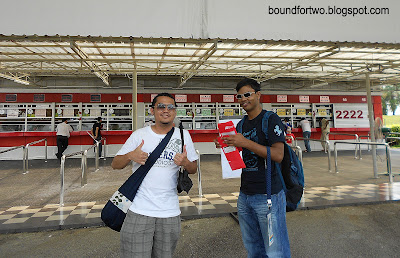 We locate our allotted parking space and disembark immediately. Our friend Manju lend us his extra ticket since his friends will come along on the next day. But after checking the validity those tickets seat were only good for the main race event. But we never lose hope, we walk near to the ticket booth to inquire but needless to ask as we found this signage. 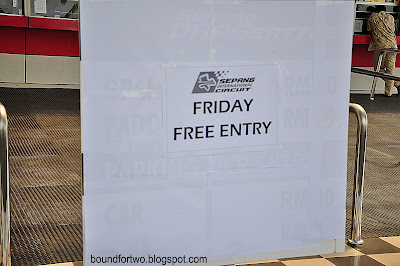 Yes, admission is free and we did not pay anything at all. It only happen during the practice session of F1 drivers. We’re still in awe, can’t believe what we saw,  and can’t utter a word. We were still on a state of denial but we came back to our senses when a guy approach us. He told that we can’t enter the main area if we don’t have the ticket. But we insisted that the sign says its Free Entry today. We didn’t listen to him and think  he was some sort of ticket sales agent trying to lure and sell us one. We continue and took snapshot of SIC map so we’ll know what the best position we can view the F1 Cars. 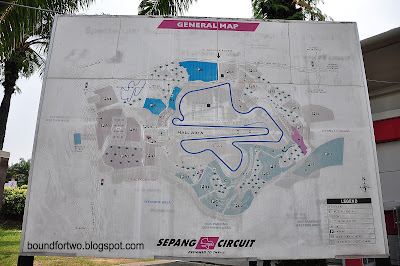 We could now hear the faint sound of car racing on the track. Instead of rushing in we  took time to take snapshots on the main entrance because it might be our first and last Grand Prix to witness except for Manju.

This is only a prelude and get ready to be amaze and admire after we got a closer look to Petronas F1 Car.