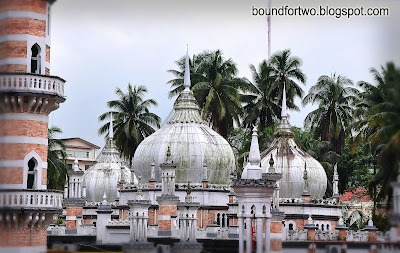 16:05  11/3/2012  On a single day we had been to a Chinese and Hindu Temple. So, to complete our cultural religious excursion we aim to visit  the religious place for Muslim Malays, The Masjid Jamek. It was built around 1907 and was opened to public on 1909 by the former Sultan of Selangor, Sultan Sir Alauddin Sulaiman Shah. It is regarded as one of the oldest Mosque of Kuala Lumpur and was previously held as the main mosque until Masjid Negara took over on 1965.

Getting here:
Easiest way is LRT, alight on Masjid Jamek Station and just walked across.


Masjid Jamek is also as known as Friday Mosque as it serves as common worship place during  Friday prayers. 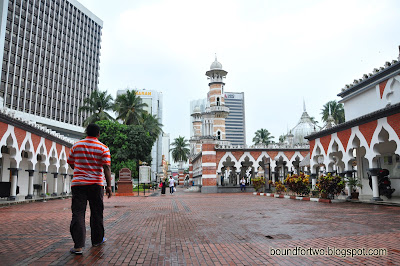 When we visit Masjid Jamek it was already past 4PM so we’re unable to go inside. We just taking snapshots outside and just look and admire it’s architectural edifice.

So we just divert our attention to take photos instead of standing there like a dumb waiting for miracle.  We stood behind the gate and fire the shutter like a paparazzi

One of the things that caught our attention to this mosque was it’s  red brick and marble distinct structure which is evidently a kind of Moorish style. It’s architecture was a resemblance to Sultan Abdul Samad Building in which both structures was designed by Arthur Bennison Hubback. 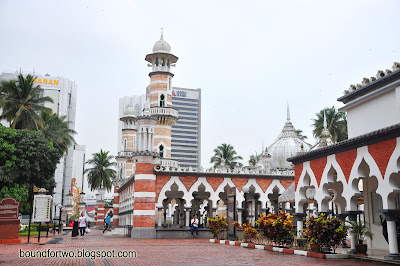 As we failed to enter the mosque we walk along to Jalan tun Perak heading to Dataran Merdeka to continue our city wandering.