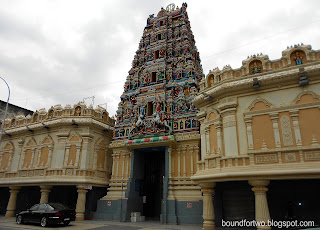 15:45 10/3/2012 We attempted to visit this place before but we ran out of time and it frequently rains whenever we think of stopping over ( sounds crazy but it’s true). It was a perfect Saturday afternoon, the Sun dominated the sky an ideal to Jalan-Jalan. We never let pass the jiffy, prepared our gears and headed to the oldest and richest  Hindu temple in Kuala Lumpur.  The Sri Mahamariamman Temple was built around 1873 by a wealthy Tamil Indian businessman Thamboosamy Pillai and  was used as private shrine of the family. Then it was open to public around 1920’s and since then the temple generally visited by Indians worshipers and it is now a tourist destination in Malaysia. 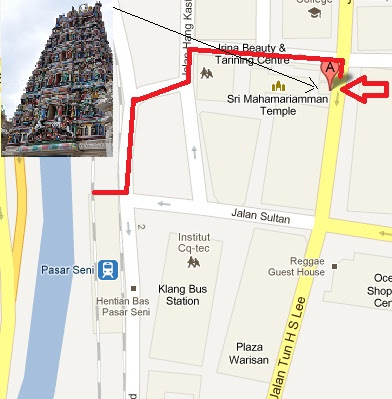 Before you enter at the temple you must read its reminder and sign . As common to Hindu temple, we strictly follow the no shoes allowed inside the shrine. 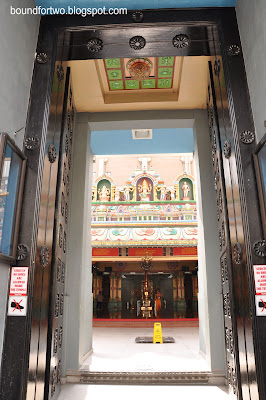 So we came in bare footed and repose our footwear to the keeper outside the temple. It’s not free , just have to pay minimal amount of 20 sents each person.
Being bare footed was a  strange feeling at first, but we easily get hang of it. The temple was very clean, neat and well maintained. The temple have three shrines the main at the center and 2 at each side.
As we entered the main shrine, some sort of  divine sensation flows to our body that made us calm, relax and invigorated. So we squat down around the entrance and take some snapshots. You can notice in our photos below. The glow, smile and spiritual switch we felt that time. It was an infinite peace of mind experience. 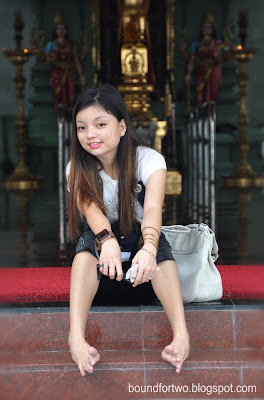 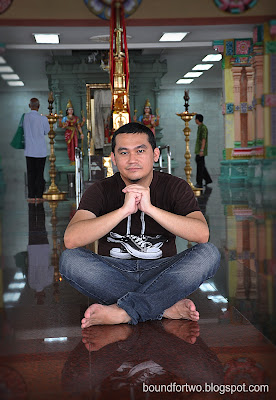 There is an eccentric feeling once inside the sanctum, which Goddess Mariamman is placed. It was more on a positive energy flux  the place. They believe she embodied as Mother Earth and generally worship  by oversea Tamil Indians as their protector when they travel to foreign lands.

Snapshots insides the main temple and shrine of Lord Ganesh.

One of the notable sight in this temple is the Gopuram tower. The structure which stands 23 meters high in pyramid shape and believe as the boundary of Real and Spiritual world. The 5 tiered Gopuram is exquisitely decorated with depictions of Hindu Gods sculptures and carvings.

We left the place exhilarated and thrive to visit more temples in Malaysia.