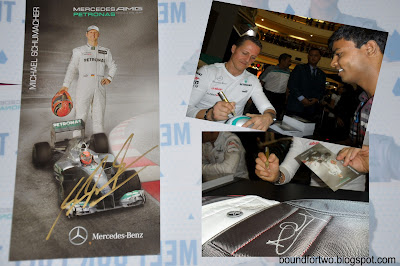 14:05 21/3/2012 I reached KLCC Suria with our  friend Manju to attend the Malaysian F1 GP meet the drivers. It is one of the event that Sky highly anticipated so much. He even sent me as his emissary since can’t come along the entire event.  As he’s still on his 9-6 routine and  did hope he can come along and meet the F1 drivers.

We knew we reached ahead of time for the event, as we check our watch it’s still 2PM. So we check the place where we can stand or start a queue as there are already few spectators coming to the spot.

We had used the time to take snapshots of the cars exhibit in the KLCC Suria atrium. 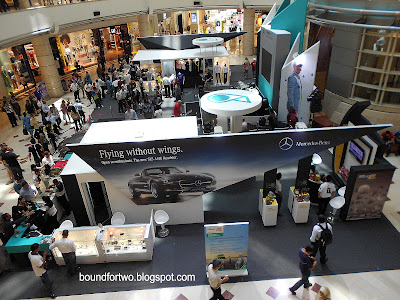 They had display the same F1 car they used in the race and a Mercedes-Benz SLS AMG Roadster car. 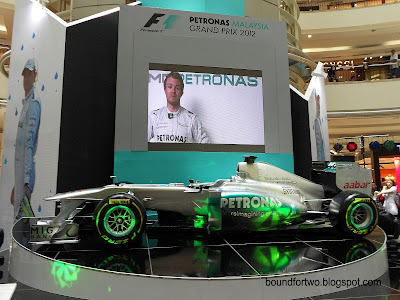 As people slowly converge at the center we joined in and started to queue. Although it wasn’t yet official , we assume it’s the line since it is near the table where possibly the F1 Drivers will sign the autograph.

Our instinct did not failed us, so we stay in the line for the next two hours.

We heard an announcement  that the said event will be delayed due to late arrival of the F1 drivers. We wait patiently and diverted our attention to the people behind the queue, who do everything just to sneak in. There are some guys insisting  if they could insert in our line but we told them it would be very unfair for people who queued up for 2-3 hours. 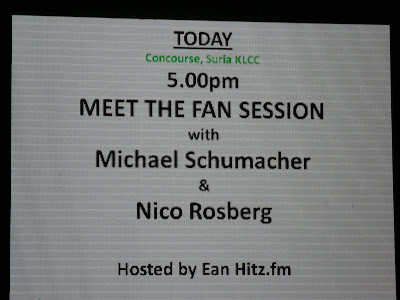 So the 5PM original schedule wasn’t followed. We quickly made the plan how to take photos since allotment is very limited when you approach to Michael and Nico.

Crowd had gone wildly as the DJ announce the arrival of Nico Rosberg and Michael Schumacher. We could feel our knees trembling and we’re sweating profusely not because of the heat or the crowd but the idea of meeting this folks  as we normally only seen on TV is something like a dream that made come true.

Even though I don’t have any photos together with these guys  to brag about. But I’m very happy because I was able to fulfilled one guy’s ultimate request, “to get a picture with him and  Michael Schumacher”.  Our friend Manju was extremely glad when he find out I was able to get a clear photo of him when Michael did autograph his mini Petronas helmet.


Well, I didn’t let the moment pass  to strike a conversation with Michael and it goes like these.

Just a simple chit chat really made my day. He signed a leaflet with his signature on it and for sure Sky will gonna took it from me if i didn’t give it to him. 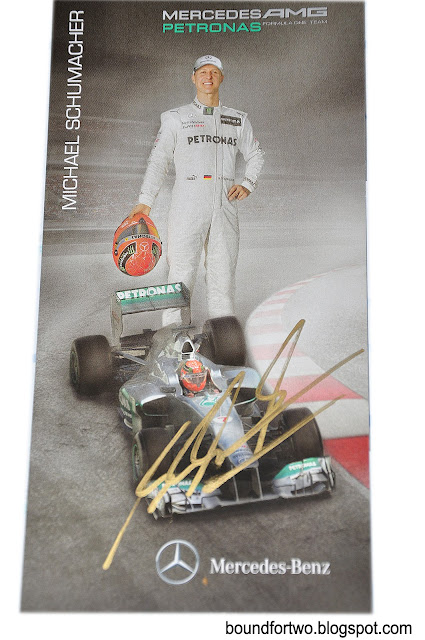 We really felt  overwhelmed and overjoyed when we exit to that area. We even forgot what we had planned earlier on who/ how to take photos on them. The effort of queuing up early really paid off as they only stay there like 30 minutes then boom there gone. We are the lucky ones, who had the opportunity to get close with them.  So, we  SMS Sky that we just had met Michael Schumacher in person and got an autograph of him. Sky did arrive some minutes later but they had already left . Well, I give that signed leaflet to him cause I know how badly he want to see them at least an autograph will make his day.