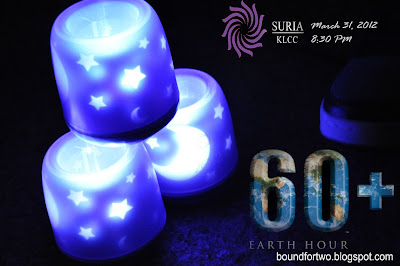 16:28 31/3/2012 Earth Hour, the event which is mostly participated in the whole world after New Year. Most of the major cities around the world will shut-off all the non essential lights from 8:30- 9:30 PM at participant’s local time. This is not only an awareness of saving energy by turning off the lights for an hour but a call for the entire humanity to be involve and do take action about the climate change. Me, Sky and our new travel friend Manju  never pass the opportunity   to join this once in a year affair.
We reach  KLCC Suria past 6PM and went directly to the venue. Since we arrive few minutes after the start of registration,so only few people was there at the booth. Then we queued and registered for the Suria KLCC Earth Hour 2012 Event.

The registration is limited only to 1000 participants  and we’re lucky to be number 41 (Sky), 42 (Me) and 43 ( Manju) on the list. It pays off being early as we get a complimentary coupon for Mc D and free LED Lamp to be use in the Earth Hour event which to be claimed before the event starts.
Since we still have the time to spare, we roam around the mall and had dinner in a fancy chicken restaurant . After a quick munch, we went back to the area and saw lot of people lining up to the entrance. Seeing tourist, expats waiting in the line is an evidence that not only Malaysians participated this event. 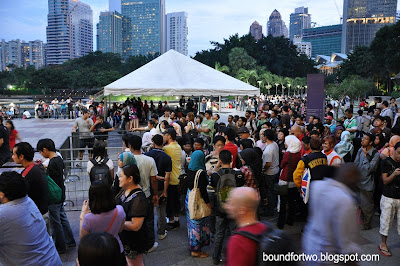 The purple LED lamp was distributed before we enter the premises to use it during the earth hour. The Electronic lamp with KLCC Suria and Earth Hour logo was given not only as souvenir but a symbol and effort of the company to promote awareness in this global activity. 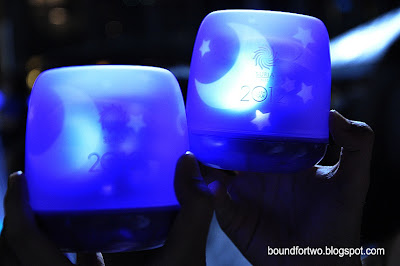 We secure a place to stay for the whole event and squat like other people did while anticipating for the Earth Hour 2012 Countdown.
The program started around 8PM. There were some performers and local talents to entertain the public.
8:29 Local Malaysian time,  the countdown started  as officially headed by the host. People slowly raising their LED Lamp as way of participation.

People keep on waving their lamps as the entire area was slowly succumb to darkness. The crowd was very cooperative as screaming didn’t end. Each people had made their own way of expressing the earth hour, some were taking photos with their friends while others laid down and gazing these LED lamps like big firefly swarming in the area. 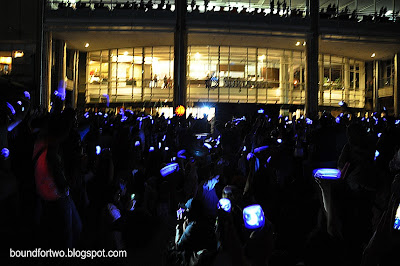 This is also rare opportunity to see the very vibrant Petronas Twin Towers unlit in an hour. Have to see the towers with absence of light is really breathtaking. We only saw was the moonlight gleams on these two princes that usually dominates and brighten the KL skyline.

Aside from partaking this event for a cause it also a good chance of meeting new people.I’ts fascinates me whenever I strike a conversation to an anonymous people and I got warm response. Same what happened last night when I met a family whose very friendly and full of enthusiasm. Read the whole story (No More Strangers: Moore’s Legacy)how I was able to mingle them  more than  60 mins during the Earth Hour event.

After an hour of gloom, the whole KLCC area and Petronas Twin Towers was illuminated again. Which means the Earth Hour is done and everyone were encourage to sign the wall as a petition to show their support in this global activity. 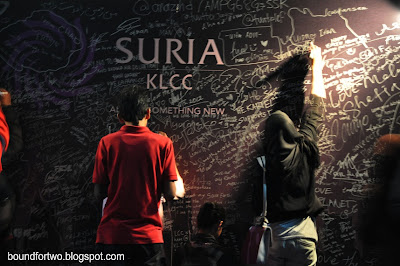 We (boundfortwo) shows our gratitude, advocacy and we’re glad to be part of it.

I learn and experience something different in the event. Instead  of just liking your friends Earth Hour tag on your Facebook or complaining when the lights get back on, be part and be socially active. Because you did not only do a favor for yourself but for the entire humanity on Earth.
Certified Earth Hour supporter,
Summer
Facebook Comments
No comments yet