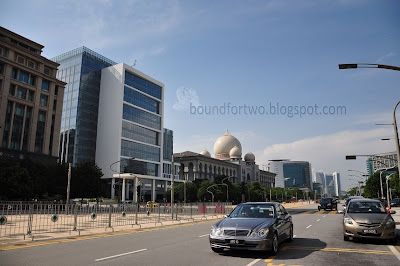 06:55 18/03/2012 It was still wee hours when we arrived at KL Sentral. Our mind was entangled on the idea of leaving Kuala Lumpur for the first time to another city. We’re bound to an unfamiliar place and  have a thoughts of getting lost and what would might happened. But these uncertainty was immediately replace by enthusiasm as we landed on the KLIA train counter and check the time. Whoa, still 5 minutes before 7AM which means we able to catch up the 7:03 AM train departure. We hurriedly went down through the escalator and get acquainted to the fastest train in KL, the KLIA Ekspres and KLIA Transit. We bound for the latter as this line will drop us to our destination, the Intelligent Garden City, Putrajaya. 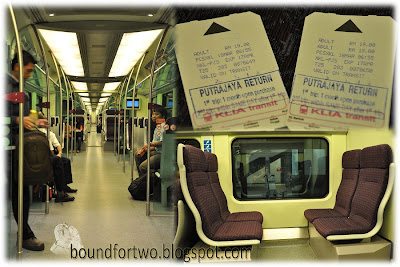 We hop in to the last coach and positioned on the end row near the train operator pit. The seats we’re very comfortable. We love it’s homey feeling and just a pillow and blanket would surely bring us to dreamland.
This was our first experience  with this train which travels 160km/hr as its maximum speed. It was very memorable and thank God no hiccups. We also enjoyed the spectacular view along our journey to Putrajaya. 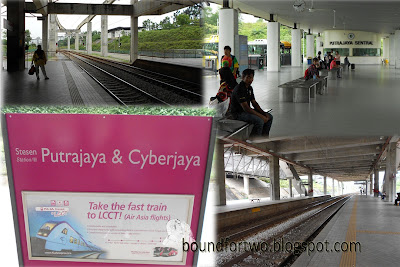 How to Get Here:
By Train: Starting Point will be KL Sentral. KLIA Transit Counter is opposite to Burger King restaurant.
Ticket cost: RM 9:50 Per Way to Putrajaya ( we opted to get  return ticket, so we pay 19RM)
Alight at Putrajaya/Cyberjaya Station.


Then got to exit that will lead you to the bus station bound within Putrajaya City. 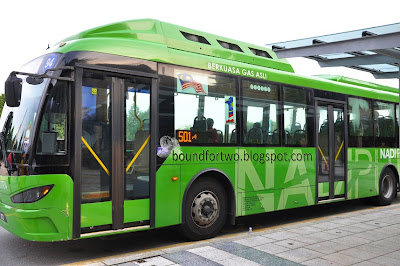 Nadi Putra Buses routes cover all the precincts of Putrajaya.


Note: Fares may be subject to change without prior notice. Check their website for the updated fares and train schedules. (link)


We had reached Putrajaya Station past 20 minutes hour of seven. We disembark and followed  the local folks and knew they’re heading to Keluar. Keluar is famous and you can see them virtually anywhere here in Malaysia. He is also a good friend of Masuk. These two are always in opposite ways. You might have a hunch now what we’re talking about. Kidding aside, Keluar is exit word in Bahasa Melayu and Masuk is Entrance. So, always bear in mind Keluar– going out  and Masuk like Pasok ( in Tagalog) going in.


At the Bus terminal, we hurriedly took a snap on the Putrajaya Map and Bus route guide. It might be handy when we lost along the way. According to the Bus route, Buses No. 102, 200, 301, 401,601, 901 will pass by Precinct 2. Only Bus 601 was almost filled so any moment the bus will leave, so we hopped in. We’re kinda surprise as we handed a 1 RM bill and the driver give us two tickets. We thought it was some kinda trick or promo, but the fare itself is only 0.50 RM. Yes, 50 sents still we’re on denial as we always knew fare minimum in KL is 1 RM even for a very short distance. But Abang (Uncle) point us to seat down so other passengers can board inside. We took that as an acknowledgment and checked on our ticket. It was indeed 0.50 Sents per way. Yehey! we’d saved some moolah, that will be added to our travel fund for our Brazil trip ( in the next 4 years).  Still overwhelm by serotonin, we didn’t notice we had arrived to our destination. As all the passengers had step out from the bus, and we did follow the same. We had seen a lot of people roaming around the field of Precinct 2.  Aside from wandering around the Putrajaya, we purposely visit it at a time for the  4th Hot Air Balloon fiesta which we’ll be covered on the succeeding entries. 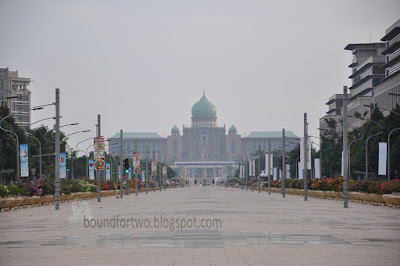 We walk along the center road to commence our city wandering in Putrajaya. We can’t stop  glancing on the magnificent distant view of a green onion shape building which resembles like of that Taj Mahal in India. We felt that euphoric sensation and thinking we’re on a different country transported by a genie. But, the Malaysian Flag hoisted almost in all the buildings reminds us that we’re still in a land part of Malaysia.We behave just like a normal tourist, taking pictures and adore everything that was man made. It was all new to us since our escapades and rambling were all limited within Kuala Lumpur. In KL , we have to go different places at a different time whereas in Putrajaya you can see them all in 360 turn at single time. 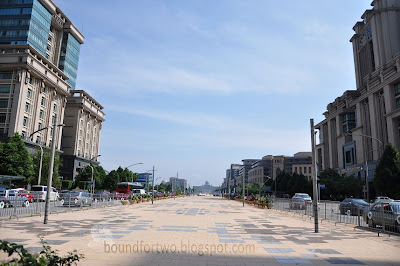 The well paved roads matching with state of the art traffic lights. On top of that these roads are lighted by solar powered street lamps. 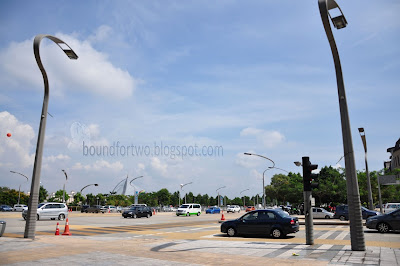 Believe us, its not only the hook style lamp post (shown above) you can see in the streets of Putrajaya. There was like an orbit shape hinge on the post, and crab eye look like street lamps (shown below). 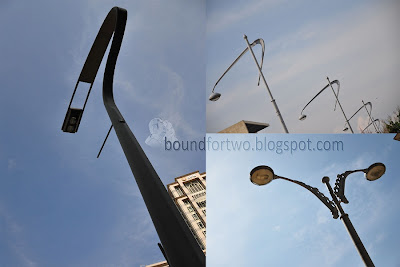 You bet it’s only three of them, definitely not. I think Malaysians really love diversity. Another orbit type but two lamps attached on the post ( one is for the road, other for the pavement). The Three lamp post that resembles like a fan can be viewed if you’re going to Precinct 1. 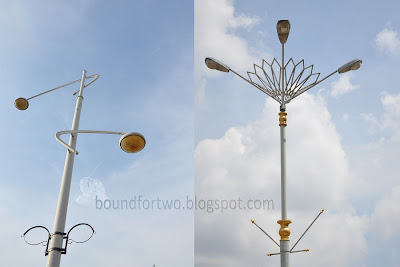 You know what these beautiful  lamps illuminated at night? Yes the elegantly designed streets with European feel and their nice well-paved roads. 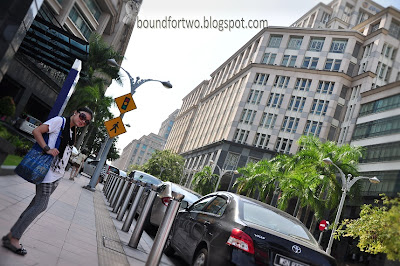 Not only the lamp post, roads and pavements we’re extra extraordinaire, take a view on there street signs, shows how it was intricately made. 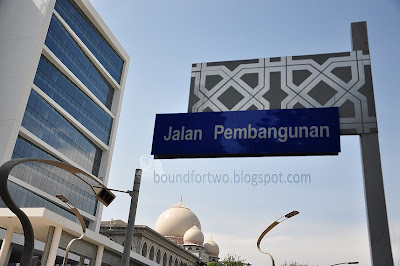 Still not impressed? Follow our path as we take on foot from Precinct 2 to Precinct 1 to unravel their  exquisite Government buildings with Islamic touch, Majestic Mosques, Bridges, Lakes and Garden that surrounds Putrajaya.