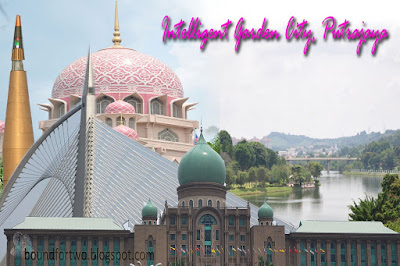 10:02 18/3/2012 After we’d blown away from the initial cityscape preview of the Taj Mahal  alike building ( actually it’s Malaysia’s Prime Minister Office). We’re now ready to meander the city on foot ( Precinct 1 ad 2) to be exact. Even though the transportation is accessible around the precincts  but the impressive architecture of government buildings, grandiose mosque,  give us hundred excuse of not doing so. For sure we’ll miss a lot if we choose to ride and can’t take a  picturesque photos while inside the bus.  It would  be also as our training ground on how long we can endure in hiking as we start this travel love affair. 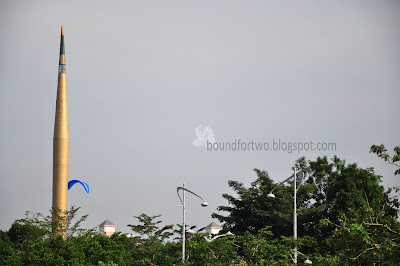 As we walk aimlessly, this gold tower  caught our attention from a distance. Monumen Alaf Baru  or Millennium Monument Tower was actually design after their national flower Hibiscus.  Wondering where the petals were located?, it’s in the base. 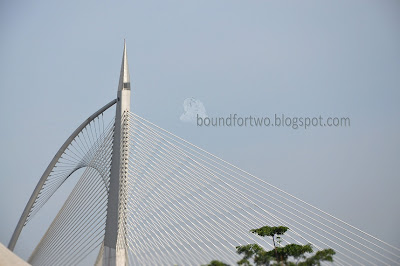 Just 45 degree turn from the monument is the futuristic cable-stayed Bridge known as Seri Wawasan Bridge. 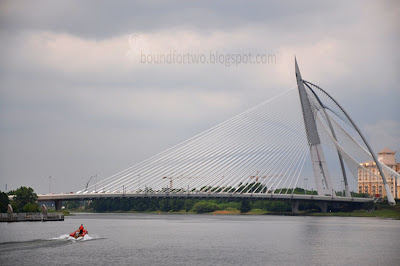 This is the view of the Seri Wawasan Bridge at Precinct 1. The sail ship semblance is the distinctive feature of this bridge which connects the Precinct 2 and Precinct 8. 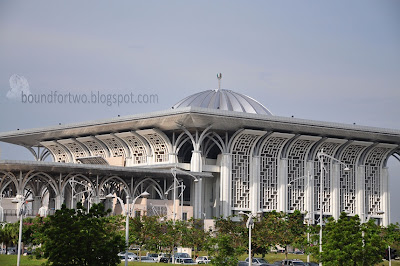 As we continue walking near the boundary of Precinct 2 and 3. We keep on gazing the gleaming building from a distance. We heard from locals this is actually second mosque in Putrajaya.  Tuanku Mizan Zainal Abidin Mosque was named after 13th King of Malaysia and commonly known as Iron Mosque. 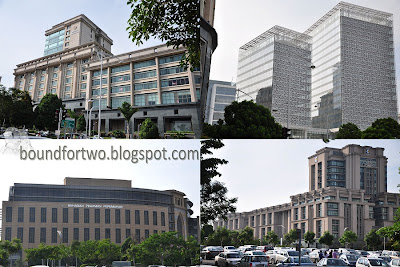 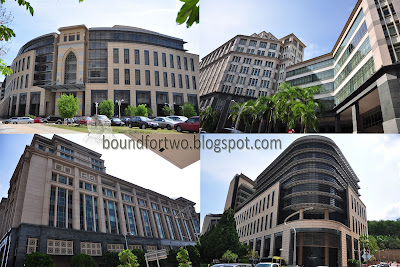 Most of the government offices occupied the Precinct 2. Each Building has it’s own characteristic and identity. From the design pattern to architecture. The only thing that connects them all was  their earth colored exterior paint and infused Islamic designs. 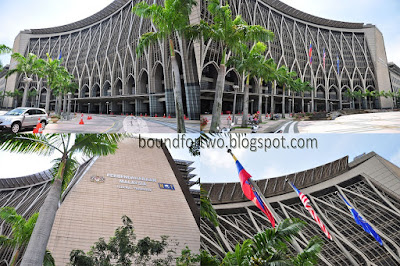 The  Federal Treasury Building might be familiar background that somehow you have seen it in a Tagalog movie. If you happened to watched John Lloyd and Bea’s Miss You Like Crazy, it’s one of the scene shot in Putrajaya.
Enough with movie tidbits, we took a rest under the shades of trees near the Boulevard Square. While sitting on the bench, something pops up in our mind. This is most likely what would happen if you crazy about with your passion, JUMP SHOT. See what I mean, Sky was relentless and had established his own trademark “The Wolverine Stance” after landing a jump shot . Don’t ever think he only attempted it once, he did it a couple of  times until he landed swiftly with his signature posed. 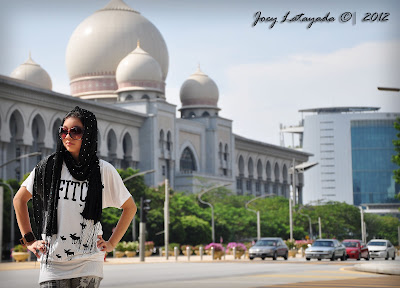 Summer is unstoppable and want to strike a pose at  the corner of the street, undaunted facing her  nemesis  “The Sun”. Her effort and patience had paid off after looking on her Vogue like posture with  Palace of Justice as the background. The view along Precinct 2 and 3 is perfect for a cityscape theme pictorial. 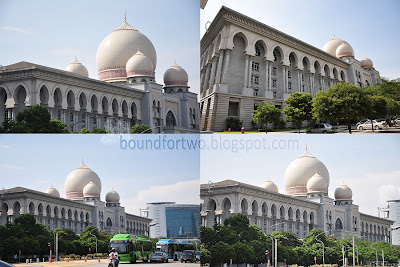 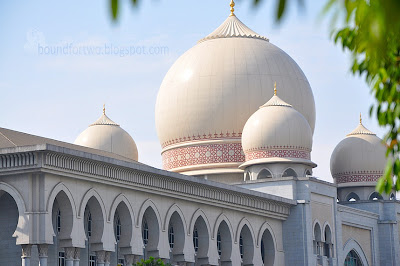 The Palace of Justice captivates every tourist eyes. This one more resembles to that Taj Mahal of India,  as the architecture was based on Islamic Influence and Moorish Culture. Istana Kehakiman as known to Malay houses the Malaysian Court of Appeal and Federal Court which replaced the Sultan Abdul Samad Building of KL. 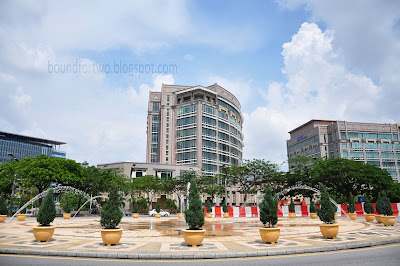 We carry on to our precinct traipsing and we halt for the moment near the Circle Fountain. To gasp some fresh air and hydrating ourselves before we proceed to Putra bridge. We sighted a Pink like structure from a distance thinking it was a mirage. But as we move closer  It become clearer it is The Pink Mosque that we’d been looking for. We’ll be unveiling its beauty on another blog entry as we come to this holy place.

Everything you would see in Precinct 1 is a Photographer’s dream subject. Majestic mosque near the lake, overlooking the Seri Wawasan Bridge. The magnificent Prime Minister’s office and the uncrowded Dataran Putra ( Putra Square).

Two things we like about Putrajaya were the bridges and the Lake. We never seen like this before as splendid as this one. The Lake is one to behold, we can’t imagine how they engineered this beauty created by man. It was serene and lovely especially at sunset. One of the activities in Putrajaya Lake is cruising by boat. But we never tried it since we can overlook the entire lake for free. 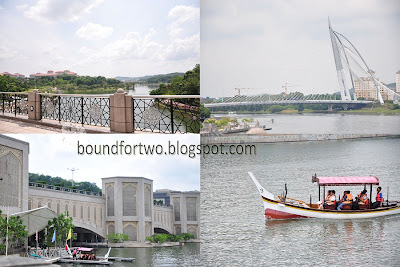 The entire view was undeniably beyond to compare. We knew we didn’t much cover the whole Putrajaya but least we manage to visit the notable landmarks. We’ll surely comeback to explore more of the city. If you might ask why they label it as Intelligent Garden City. Just look on the    futuristic solar powered street lamps and green lush scenery that surrounds the city and that would justify its name.