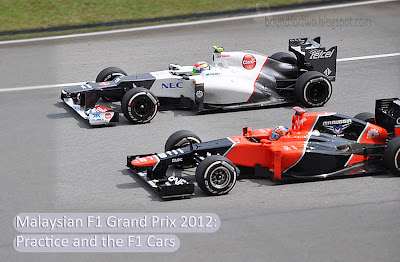 13:55 23/03/2012 Everyone had already spotted a place to foothold while waiting for the coveted event , “The F1 Practice”. We considered ourselves lucky since we secure a seat on the main grand stand just opposite of the start/finish line. We had doubled checked our gears to make sure everything is functioning and settled on the best spot to capture the hi-speed cars.  Then we saw a familiar Mercedes AMG car deployed on the circuit. It’s actually a safety car that patrols the track  to make sure it’s free from danger.After few minutes, we heard a loud voice coming from the Grand Prix commentators reverberating within the SIC.
The crowd were all got excited, until the  Malaysian Grand Prix 2012 Practice Session commenced. Each can’t wait to see their favorite F1 cars speeding on the circuit track. Our informant (Manju) didn’t failed us since the practice starts at exactly 2PM. 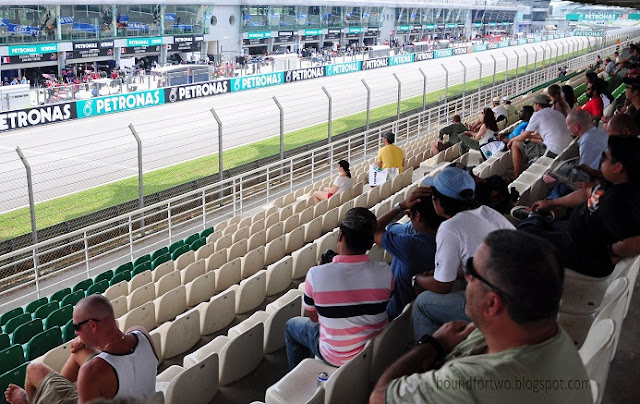 Looking the cars maneuvering on the track was a formidable sight. We’d been caught off guard as we didn’t bring an ear plug to protect from  the sound that exceeds 110 decibels. It was really ear-popping and could not hear each other when we talk. We tried to used the headset of our mobile phones, but no avail could not barred the thundering sound of F1 Cars.

It was very challenging for noob like us to snatch a picture of a high speed car. If we didn’t set our cameras to sports mode or shutter priority, we’ll only get the head or tail of the car. Or worst we only catch the race track. Take a look on the video below, how Sky managed to grab photos, using his entry level DSLR.

Indeed a tough challenge for Sky, aside it’s his first time to cover the F1 Grand Prix event. He only have the basic equips that will not even passed to  sports photography requirement as compared to those big guys holding their PRO DSLR with gargantuan lenses. Well, he make it up and hit the shutter nonstop in different angles. 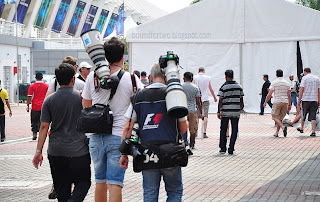 After an hour and half  of listening to the buzzing sound of  cars. The practice session concluded  with Lewis Hamilton of Team McLaren leads the race followed by Michael Schumacher and Jenson Button. It was all worth it and we still felt the tingling sensation on our ears.  We took a rest in the mall area and compare each others images. With all the trial and error and countless attempts, we able to obtain the complete set of  24 Images of different F1 cars  of 12 teams.

Looking on these photos made us excited and want to visit another F1 race. And hope to experience the night street circuit of Singapore GP this coming September.