10:00 28/04/2012 We initially started our historical meandering at the Dutch Square and walked aimlessly at Jalan Kota. We stayed there for a moment  gasping for fresh air before we bumped to a portal that has a signboard “Bukit St Paul” which means St. Paul Hill. We don’t have any clue what’s in there and our curiosity  played its role. We asked our friend Manju if he would like to sneak in before we dragged him to the hill. Just a bit of encouragement, and got his nod. 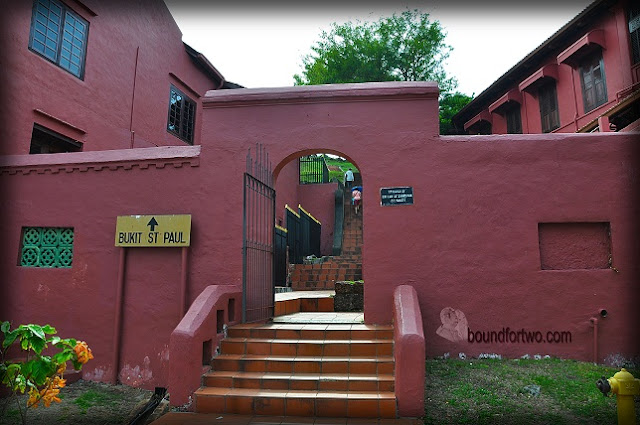 Even  it wasn’t part of our itinerary we just go with the flow and  followed the old brick stairs going up to the hill. We just noticed on the portal, it’s inscribed as Church of Our Lady of Enunciation ( St. Pauls). We thought it’s the other name or it was a previous name of St. Paul’s Church. 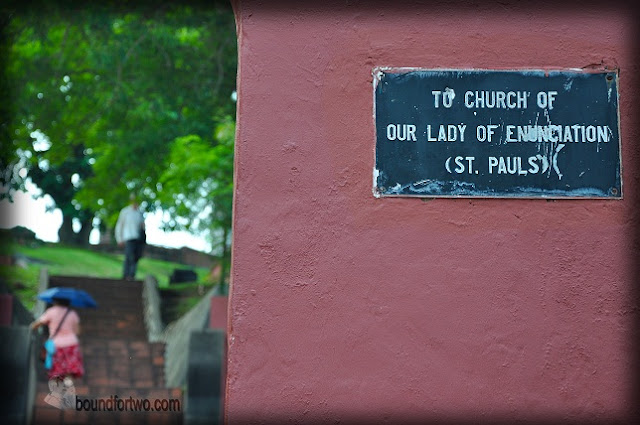 Going up to the hill was bit tricky since you’ll be ascending to steep stairs  which were closely  inclined to 70-80 degrees . But we took it as a challenge and didn’t back out. 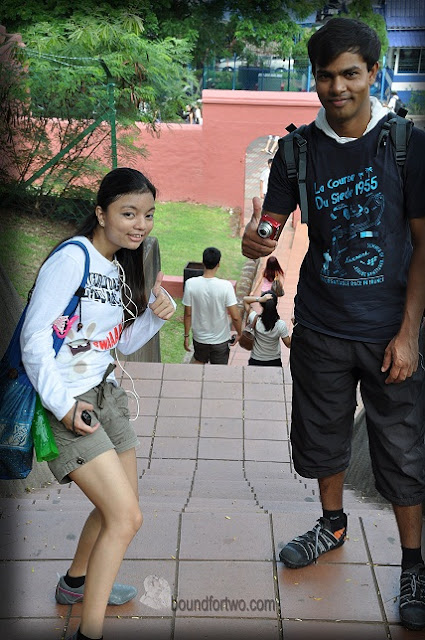 Who would ever quit if you already took a preview of what you can expect from the top? The scruffy look ruins of St. Paul Church impressed us from the distance. 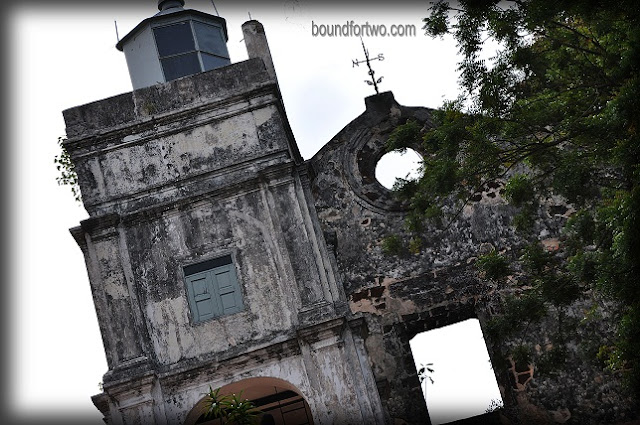 We didn’t waste our time and hurriedly went upstairs. Manju and Summer arrived first on the hill and Sky followed. He appeared late since he was appalled by the view overlooking Melaka ( Malacca ) Strait. Once you reached the top, you’ll be greeted by a statue. It is an image of the famous Catholic missionary St. Francis Xavier. 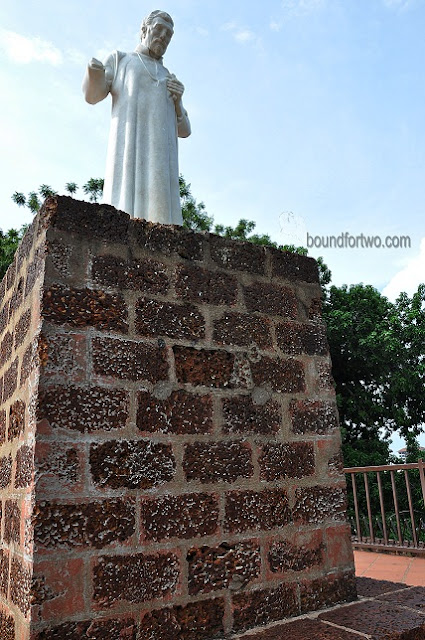 He frequently visited St. Paul’s Church and used it as his base for missionary trips to China and Japan. He died during his mission in China and his body brought to Melaka and interred in the St. Paul’s Church for nine months before his remains were buried in Goa, India. 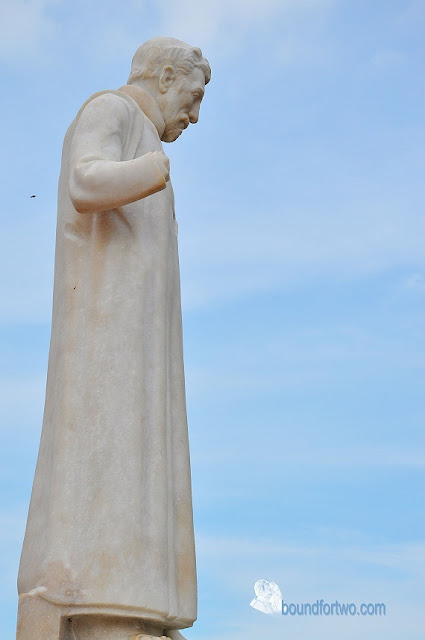 Guess, what is different from the statue of St. Francis Xavier in the image above? If you had seen it and pondering why is it so. Well, according to in  wiki, a large tree fell and broke its right arm. It took us some time to realize before we switch on our inquisitive eyes. You’ll be astounded when you closely see the ruins of St. Paul. Its physical appearance will tell you many centuries she stood there. The church erected on Malacca Hill before it was renamed to Mary’s hill then St. Paul’s Hill. It was originally a small chapel when the Portuguese Captain Duarto Coelho built it in 1521. 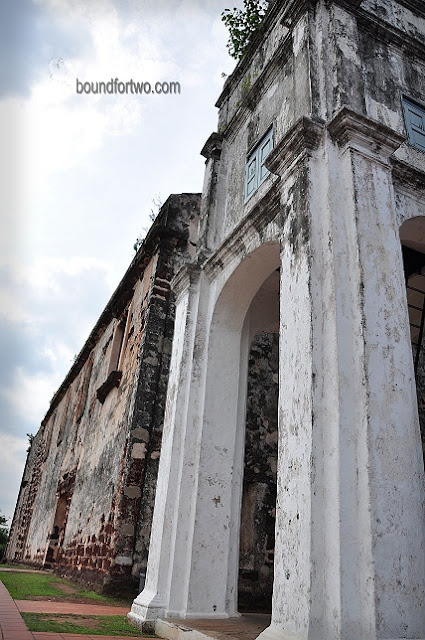 It was called the Chapel of the Mother of God (Madre de Deus) or our Lady of the Hill. It did go through some renovations and the Tower was added in 1590. When the Dutch kicked Portuguese out from Melaka, they destroyed all the buildings except the Fortress and this Church. The Dutch reconsecrated it and turned it into a Dutch Reformed Church and name it St. Paul’s Church which is used until this date.

When the British took over Melaka from the Dutch they used the Church as a storehouse of their gunpowder. They built a lighthouse as picture shown above which still standing until the present date. 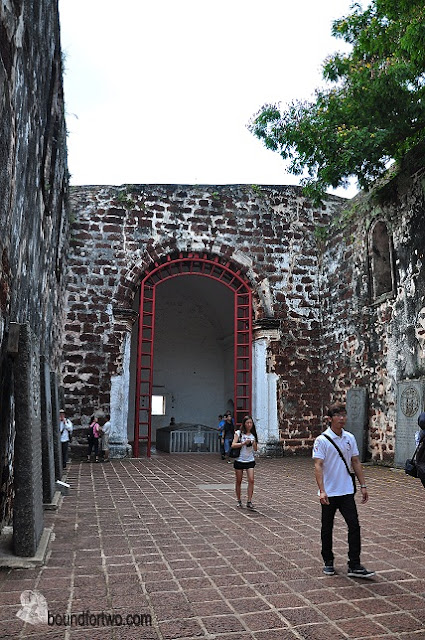 Inside the ruins, all you can see were tombstones,  old bricks in which the wall is made of. I forgot to mention  it was flooded by a tourist in or outside the ruins. 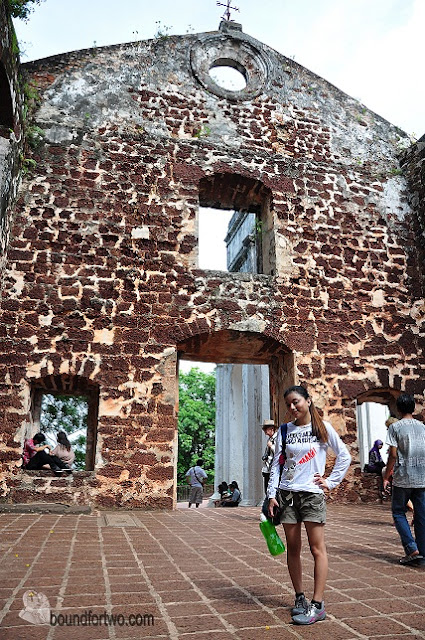 St. Paul church was well preserved and found it amusing for a historical aficionado like Sky. 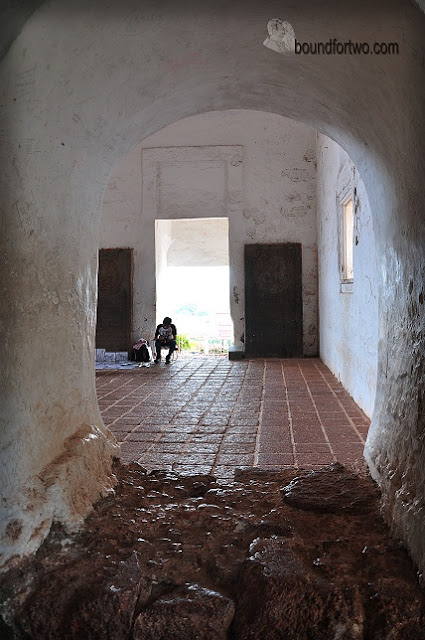 When Sky went to the inner room of the ruins, he felt mystified as he discovered it was a chamber of old tombstones. He then recalled that St. Paul Church was a burial vault for people of high distinctions during the Portuguese and Dutch occupation. 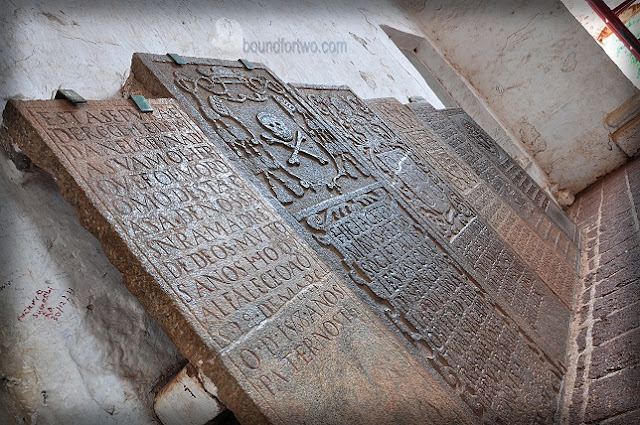 What he saw were tombstones attached to the walls with Portuguese and Dutch inscriptions on it. Mostly when people find tombstones they find it eerie or ghastly but this one was very enlightening. 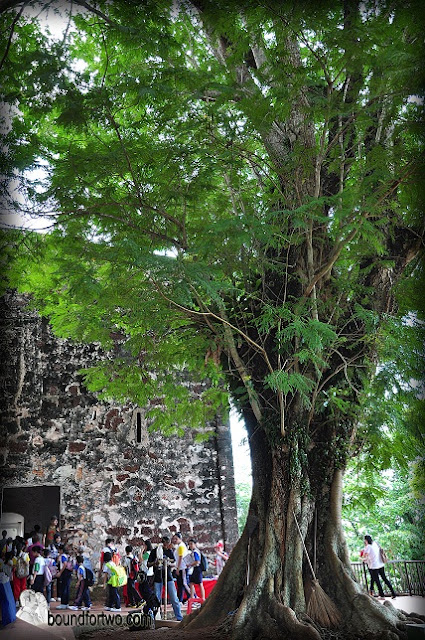 When the  primary kids mostly likely having an educational tour crowding up the inner ruins. We left and a took a rest outside. Everyone will catch the attention of this century-old tree just beside St. Paul ruins. Surely it witnessed how the church was transformed into ruins. 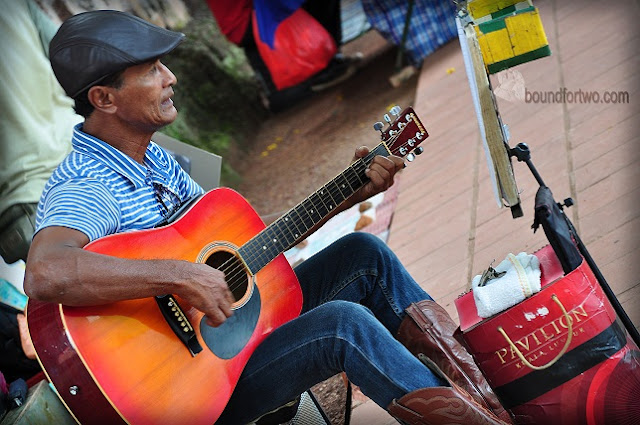 While we’re breathing some fresh air, we had been serenaded by a music street artist. Damn, he really got a talent. He was singing Faithfully as popularized by Journey. He hit the right notes and his diction was really good. If Randy Jackson or Simon Cowell heard him singing he will surely get a yes. Our friend was really amazed by his talent and without a second thought he shared some moolah to cheer him up. 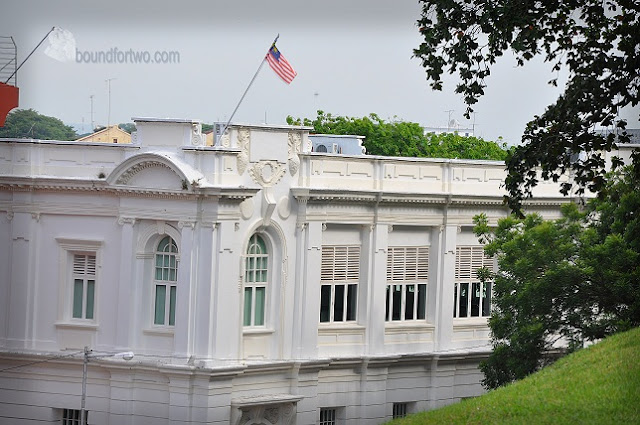 We forgot we haven’t told you that St. Paul Church stood on a hill that gives you 360-degree view of Melaka. 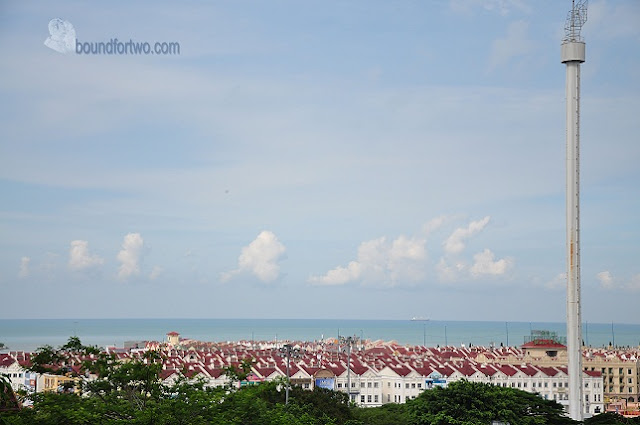 The Melaka ( Malacca) strait as viewed from the St. Paul’s Hill. Those Red roofs were Townhouses and commercial buildings. This is the view when Sky was appalled and took a pause before he reached the top. 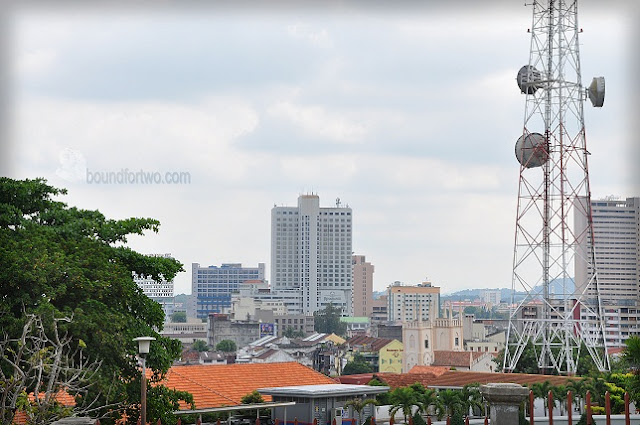 View of the city with the Communication tower and Renaissance Hotel of Melaka from a distance.

Of course,  we’ll take  the opportunity of the panoramic view of Melaka Strait and Towering Taming Sari. Captcha!

St. Paul Church ruins were definitely worth visiting and steep climbing was really worth it. Can we do it next time?