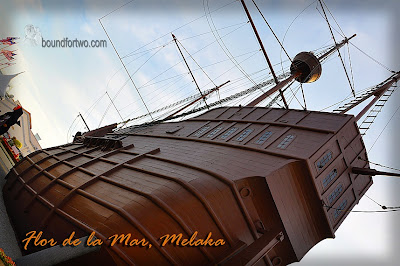 17:00 28/4/2012  We all felt invigorated after changing clothes and taking bath in our temporary abode. Maybe it was all we need after that nine hours streak of continuous traipsing. Ok, so much for vanity sharing, we continued our meandering passing the old street of Kampung Hulu. Then used the same route when we’re looking the guest house earlier. It was no challenge walk going to Samudera Museum but we’re battling with dry humid weather in the afternoon. Anyone will surely panted while walking on that hot weather. Good thing we brought our umbrella and refillable water pouch to ease the heat. 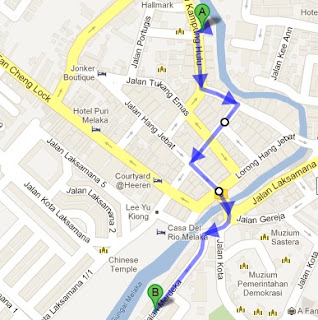 It just 15 minutes walk from the guest house to  the big ship. Crowds had already queued up to the entrance as the Samudera Museum is known to be best visited during night time. This will be the 2nd museum we actually visited after the Melaka Sultanate Palace Museum. The ticket was only 3RM each for the price of 3 Maritime Museums. Not bad right?
Of course  history lover boy lined up and bought our tickets.

We entered swiftly and stunned by the mammoth replica ship. We had never experience getting on board on actual wooden ship. This gave us the opportunity and explore this copy cat historical carrack. But before that let me introduce you to Flor de la Mar (Flower of the Sea). 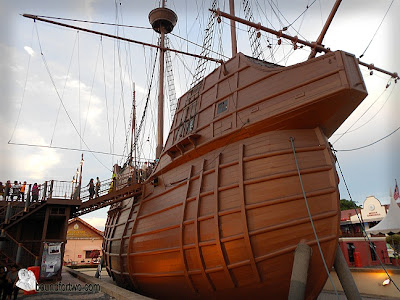 She was one of the finest vessels of the Kingdom of Portugal bringing spices, trades from India way back in 16th century. Her last voyage  was headed by the famous navigator Afonso de Albuquerque carrying a vast of treasure for the king but she did not made it. She sank and until now still lies in the seabed somewhere in Straits of Malacca (Melaka). 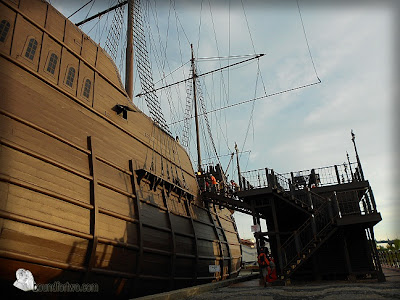 Enough of historical tidbits, we followed the crowd and went up through the stairs. These guys were damn excited to get on board and hurriedly went ahead of me. Guys, this is not Amazing Race Ok?. If I didn’t shout  to snap them a photo (cam whores) They’ll surely ignored me and forgot their Princess was behind them lol. 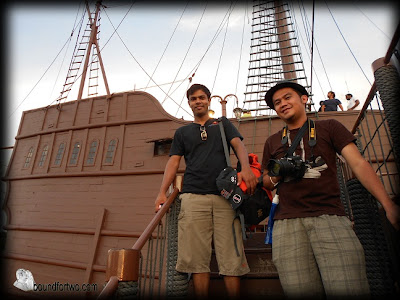 Reaching the last stair before the main deck we scrutinize the ship’s exterior and it’s parts. The entire ship was mostly made of wood and all we can see were beams and big ropes. 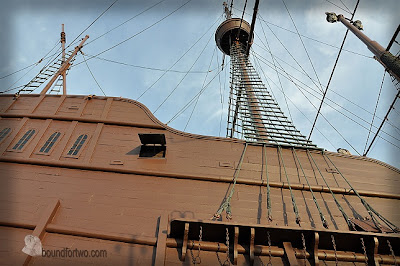 When we’re on the main deck I can’t help but noticed those kids roaming and playing. Maybe if they brought here for an educational trip instead of a regular sight seeing they will learn more about  history. And it will be  good venue for them to learn ship 101.  Sorry lumabas lang ang pagiging teacher Mila ko. 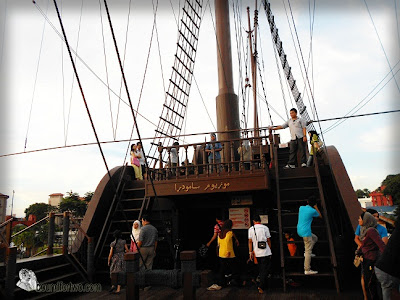 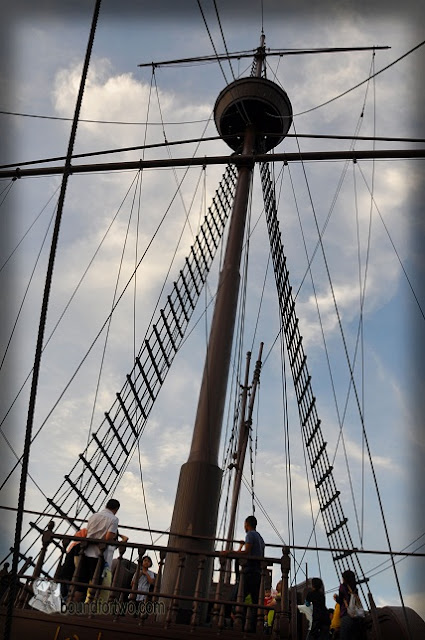 My two guy companions can’t stop looking from the pole above us. Hello? marami kaya satin nyan, poste ng Meralco. The staggering height of Flor de la Mar main mast was really awe inspiring. The  intertwined shroud and a long boom reminds us of the famous movie franchise Pirates of the Carribean. I knew someone was dreaming to be Capt. Jack Sparrow. Ok, Sky just grow a beard and goatee plus dreadlocks and wear that red bandana, you’ll get a slim chance. hahaha. 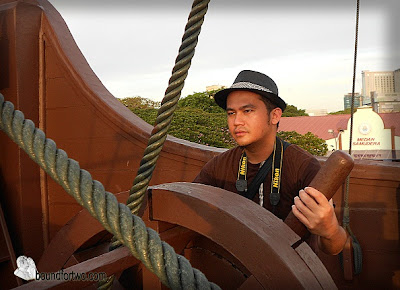 We entered the captains cabin and examine the stuff used in navigation during the 16th century. Everything was done manually like magnetic compass, old navigating map and relying on celestial navigation. When we left the cabin we haven’t notice that Sky didn’t followed us. He was too attached and took more time inside. Then we realize he can no longer be found. Maybe he was fooling us or playing a hide and seek. But it seem we can’t find him nowhere inside. “Buti na lng hindi ako nag Sisa mode sa barko” 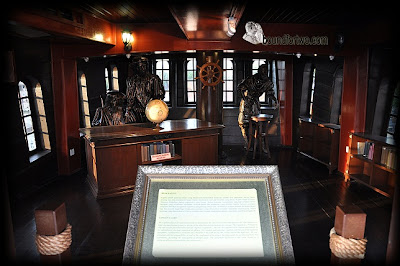 Little did we know he went downstairs and uncovered more information about the ship and the maritime  history of Melaka. 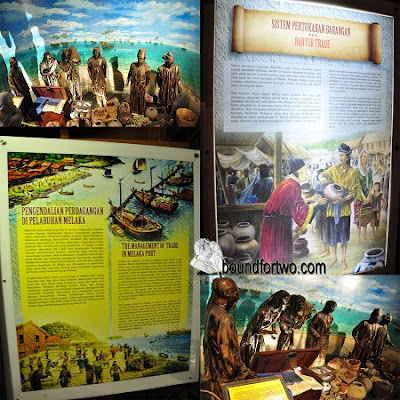 Upon seeing the display and representation of Old Melaka Port. He felt he was transported to the 16th century. He thought himself as a trader doing a regular barter of his spices in exchange for antique and expensive crafts brought by the Portuguese. Then a blink of an eye he woke up to reality. He didn’t notice he stood there like for ten minutes and crowds looking at him differently. Eh? what a weirdo. lol 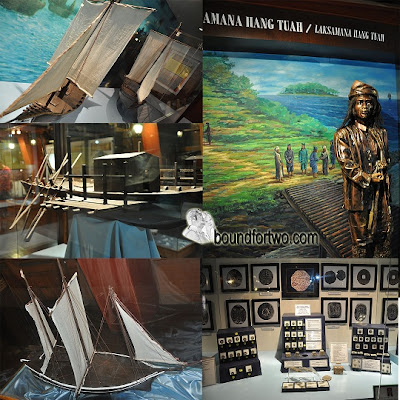 He came forward and continue to explore the museum. There he meet again  an image of Hang Tuah, a legendary warrior during the reign of Melaka Sultanate. He spend his time watching the miniature ships and maritime vehicles. Then his eyes glued upon witnessing the so-called treasures. There he saw coins, small metal crafts which believe a part of the sunken treasure. When Sky realized he had no companions to talk about the treasures of Flor de la Mar. He quickly went back to us and tell his tales of exploring the museum below the replica ship. At least we did a favour to him by allowing himself discover the treasure beneath. 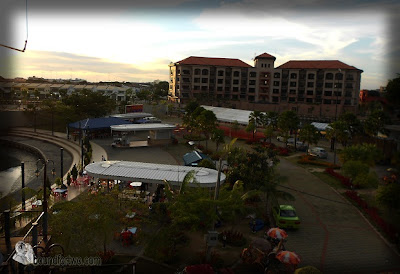 The sun was about to set which gives a spectacular view of Melaka from Ship’s view point. The entire horizon was painted with bright orange, purple and light blue colour. Too bad, we’re unable to capture any single image of it. We’re too much pre occupied  and had been carried away by the dramatic sight. 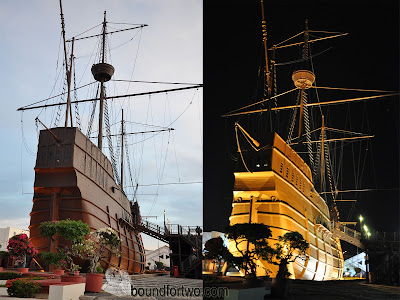 Just a few moments we waited until dusk to view Flor de la Mar at night. She was illuminated with powerful spotlights. Indeed it’s beauty is timeless and even she now lies forever beneath the sea, she will always remembered with this replica.