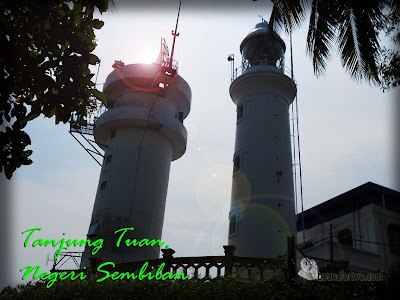 08:30 20/08/2012  Staycation in our abode while catching up some backlogs in our blog. That’s how we spend our first two days of the long weekend. Yes, boring it may sound but we have a great time looking back our thousand raw pictures from the previous travel. In between, we’re still thinking what would happen to our supposedly Krabi adventure. We imagine the soft white sand of Phi Phi Island. The sound of the waves, the splash of water coming the people snorkeling in the open sea and the salty smell of breeze coming from the Andaman. In time we will step on the longboat that will bring us to Maya Bay, made famous by the movie “The Beach”.

After we realize that Krabi dream was over we thought something of an alternative. Because we don’t want the remaining days of  long weekend will be wasted. Nature trekking and same time beach bumming pops up into our mind. The only viable option  would be  PD (Port Dickson) in the state of Negeri Sembilan which is 90 km away from KL. With the help of internet we narrow down our option to Blue Lagoon and Tanjung Tuan. These two location were more than hundred meters away from each other. Getting here by public transport is easy but time consuming. It took us 4 hours before we reach the gate premises of Tanjung Tuan alone. We’ll share the details on the next entry how we get here from KL by public commute. 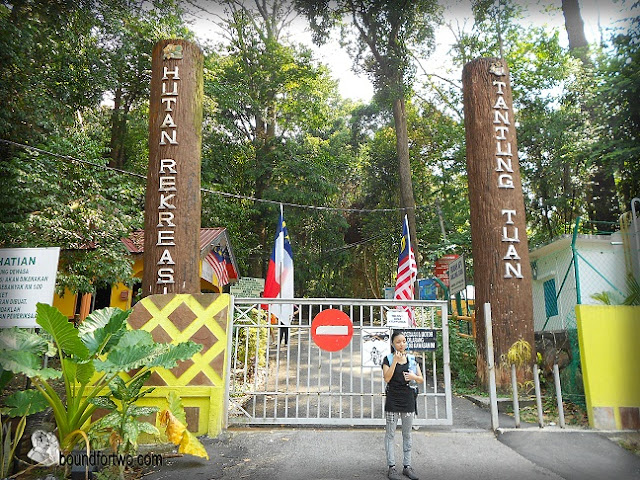 After hiking of more than 30 minutes from the highway we reach the Tanjung Tuan entrance. You’ll never get lost when you’re walking towards this forest reserve since this is the dead end. At the gate we notice why there is a flag of state of Melaka opposite of the Malaysian flag if this place is within Negeri Sembilan. We just knew from the staff that  Tanjung Tuan Forest Reserve is administered by the Malaccan government. Then we paid the minimal entrance (1RM each) and login to their guestbook. The staff reminded us, that we need to leave before 7PM. We just nod and assure him we’ll not take that long. 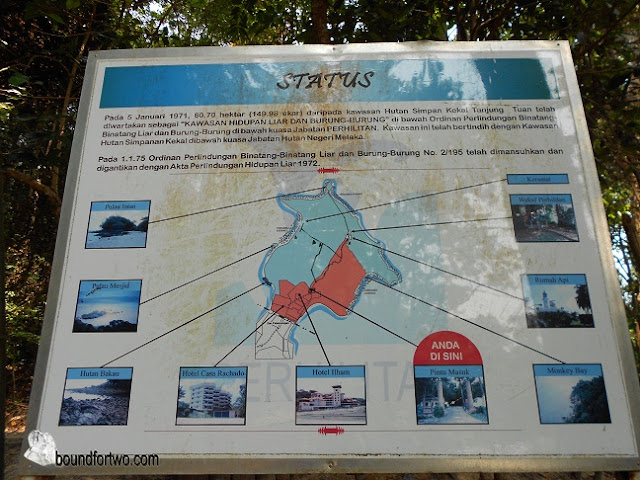 By looking on the map, we estimate Cape Rachado’s Lighthouse is just few meters away. Not until we ask Abang( the staff). With a friendly smirk, he said “You need to walk 700 meters”. What?? Over reacting. We just walked more than 2 Km so why complain with 700 meters right? For the record, this is the farthest nature trek we had so far. 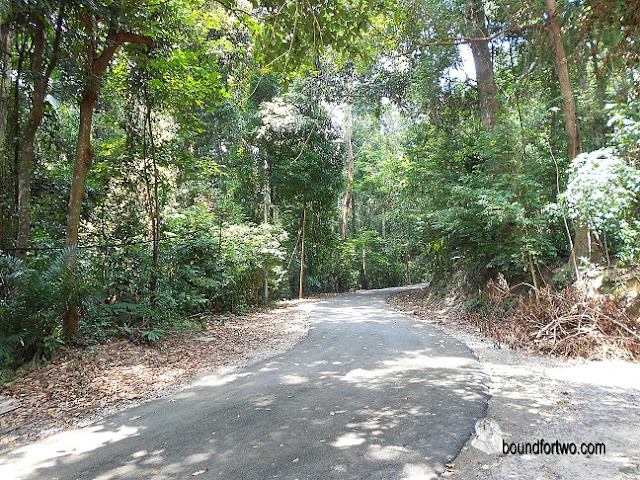 Though there is asphalt trail going to the lighthouse, this is no easy. The winding path  and  the slope makes it more challenging for people who don’t regularly exercise (that’s us). As we walk farther following the trail, we hear the sound of real forest. Undisturbed, the harmonious cry of insects was like symphony to our ears. All we can see are intact canopy that constantly provide us the shade and made the place cooler. Then we heard noise from the tree, Boom! a long tailed macaque monkey surprise us. It didn’t scared us because we thought of squirrel instead of that shrewd monkey. 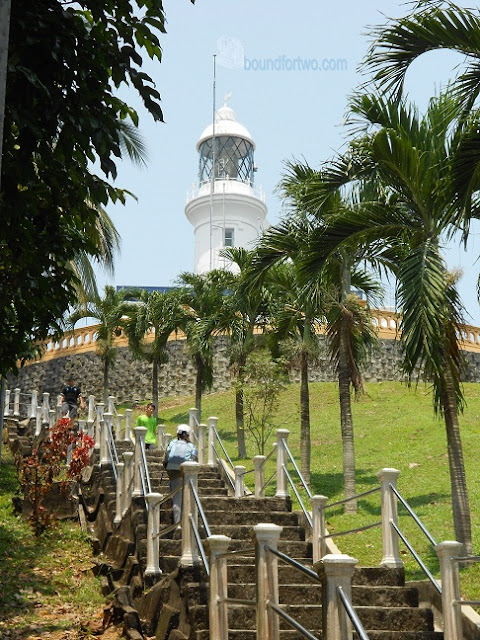 After some several minutes we saw a beautiful Lighthouse on top of the hill. Looking upon the lighthouse current state, one could tell it had been built few decades back. 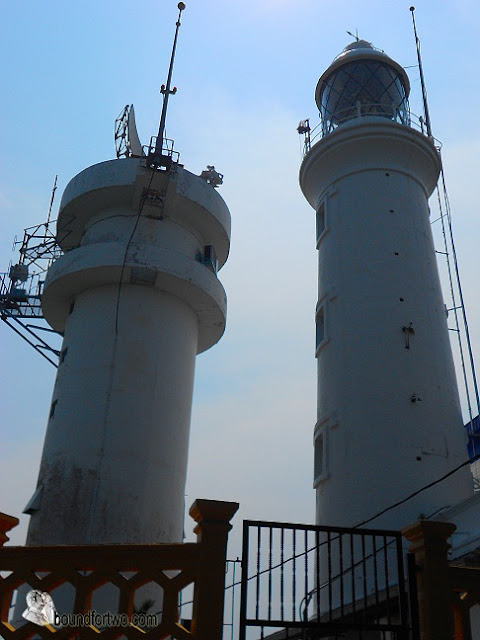 But don’t be fooled, this lighthouse was built during the Portuguese occupation. This lighthouse had been the witness of the famous naval Battle of Cape Rachado. It’s a stand-off between the two naval superpowers, Portuguese and the Dutch during the 16th century. 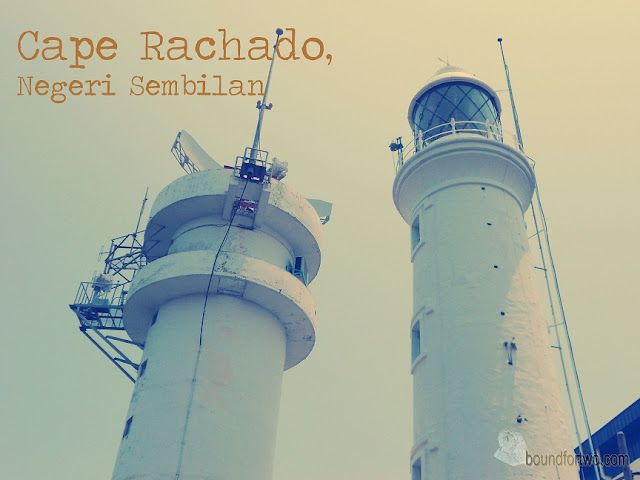 After some 400+ years, Cape Rachado Lighthouse at rest and still do it’s function to guide the ship away/closer from the shore. 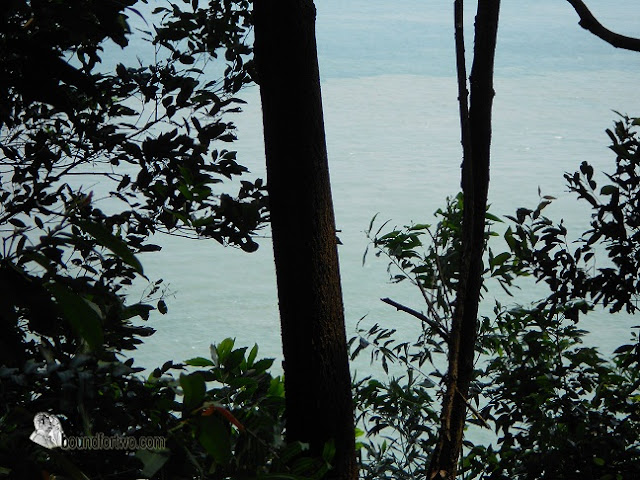 Can’t deny how we’re historically amaze by the Cape Rachado Lighthouse. And the overwhelming view of the Straits of Mallaca. Far different compare on what we saw in St. Paul’s hill view point. They said if not cloudy or hazy, the opposite Sumatran archipelago is visible. 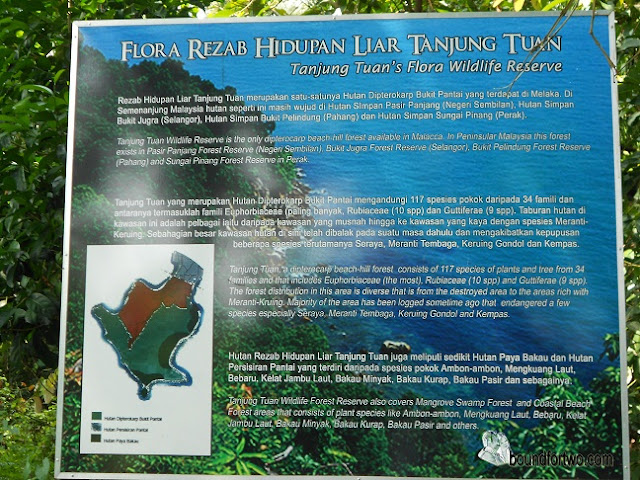 Aside from the virgin forest, historical Lighthouse and panoramic view of Straits of Malacca. Tanjung Tuan is also known to be the venue for watching the migratory birds  going northward. But  it’s only happening in the month of February to April. Something to look forward next year if we have the right gear.
We didn’t end our nature trekking by just looking the dipterocarp forest. Instead we continued the trail below the hill and something astound us. To be continued…
Nature Tripper,