13:20 20/8/2012 You might be wondering why we keep silent for a week and not even posted a single filler post. We opted not to, well the rationale is we’re still can’t get over with Siam. Up until now, our mind were still left behind in Land of the free. The sleeper train, land border crossing, the language barrier,  reclining buddhas  and everything about Thailand. Don’t worry we’ll cover them all on the up coming entries. For now we’ll share you how we get to Pulau Intan and how we ditch Blue Lagoon.

After gawking Cape Rachado lighthouse a couple of times and satisfying my fanciness with this historical landmark. We decided  to move on our next destination, to Blue Lagoon  (touted to be cleanest beach in Port Dickson). Yehey! at last our weary feet will be able to relax while bumming and listening to the waves of the sea. But before I could jump to ecstasy, I’ve got to tell Summer that we need to go back the same path reaching the Cape. I reminded her that we had passed them en route to Tanjung Tuan. After mentally calculating the distance, she had answered NO! Tidak! Hindi! Dili! I look like a little puppy that was neglected by an owner, as she muttered. Ok, I hate argument especially on  mid day with empty stomach. I should be more considerate when taking these things up. After all, we drag ourselves more than 2 km from the highway without anything in our guts and travel more than 3 hours just to see this historical lighthouse in Tanjung Tuan Forest Reserve. 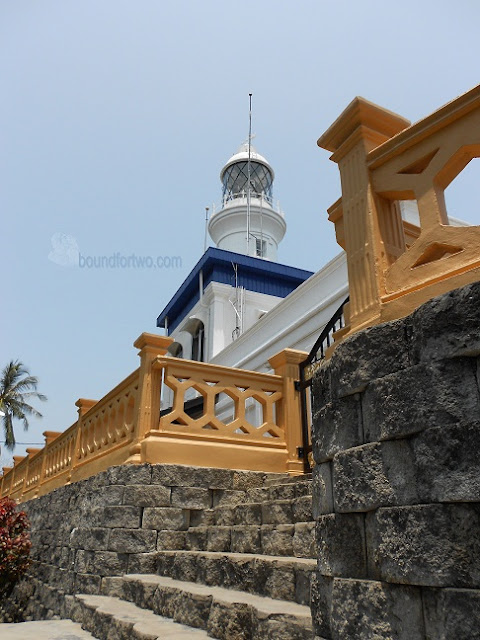 Since we heard from the previous folks who went down the hill that there is a beach below. We agreed to go and continue the trail going down the slope. As we began to hike, we notice the forest becomes denser and only heard the sound of insects and chirping of birds and random movements on the bushes. Sounds creepy and any moment something might slither on the trail, God forbid nothing showed up. Going down was like a breeze for Summer, and if you asked me. Oh boy! I acted equivalent to an age man who need the railings to avoid slipping. I was like a train that needs to stop every station. I’m very thankful that they put some wakafs (resting hut) in case you need to gasp some air or take a break in between the hike which sort I did. What a shame (face palm me). After delaying our descent due  to my constant panting, we could clearly heard, the sound of waves pounding the shore.

Voila! meet Pulau Intan, the secluded beach of Tanjung Tuan in the State of Malacca. Is a white powdery coarse sand beach surrounded by green scenery of mangroves and beautiful karst. We didn’t expect of such beauty was hidden beneath the hill of Tanjung Tuan. We just claimed our reward after an endless hiking coming from the highway reaching the cape. We had completely forgot about Blue Lagoon and it’s promising clean beach. Maybe, we’ll reserve for some other time. 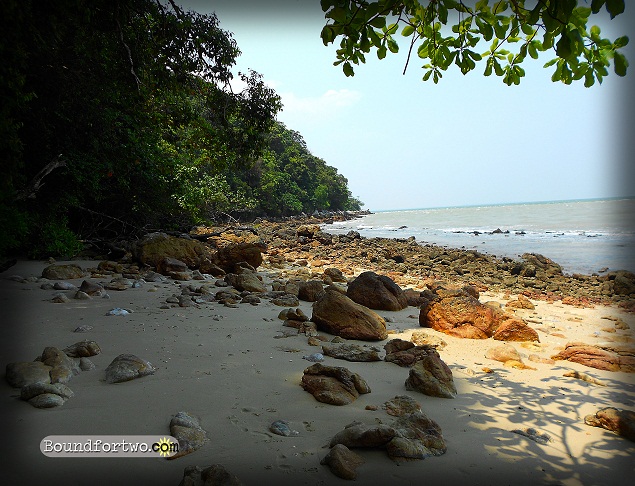 The magnificent yellow orange-brownish boulders or rocks scattered on the shore justifies the word untouched. While the Sea Almond (Talisay) tree give us enough shade from the  unfriendly rays of mid noon sun. We hope it will stay this way, so that the next generation will still enjoy the natural beauty of this pantai. It’s untouristy state makes it a suitable location for couple who wants space for skinny dipping. Oops never mind that, not unless you want to be peek by random strangers. We could define it as a perfect getaway from a hustle and bustle of KL. A kind of beach that could only be yours when no one bothers to go down the hill. 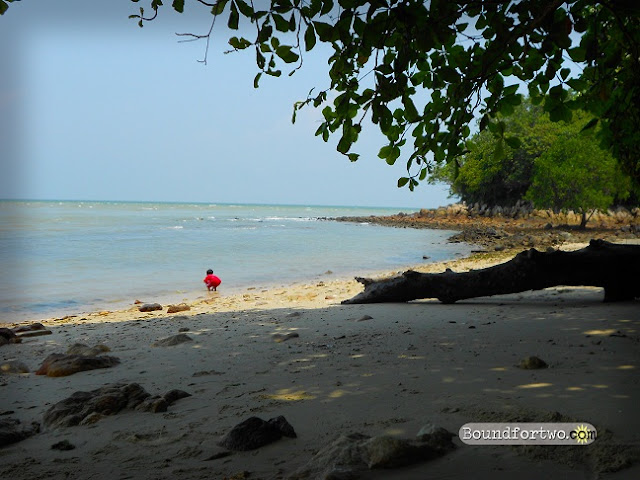 During our visit, we can’t do our intimate moment (not that what you think). I’m talking about our exclusivity with the place of doing romantic stuff like running in the shore like a newly wed couple and lift her up with my mighty arms (too quixotic). Or lying on her lap while she feed me with grapes like a pharaoh. Please bear with me, as I tend to get overly romantic induce by chick flicks. Going back,  It went spoilt because of a family who came first and stayed in Pulau Intan. They’re having like a reunion in this far far away pantai (beach in Bahasa Melayu). I’m not blaming nor complaining but glad on the other side. On a sense, if any thing might happen to us in these secluded place  someone  will be there for an aid.

We immediately turned our sarong into a picnic mat and opened our pack lunch. The aroma of lemon dominates the air makes us more hungrier than we thought.  In case you might asked if we buy it, NO. We proudly prepared it ourselves since this is easy to cook and also to save some bucks. But after sniffing all the lemon fragrance, I felt full and my appetite just got lost in an instant. Maybe, not eating a brekkie was a culprit and to add that, hiking and nature trekking dissipated all my energy. I no longer have guts to fill my so ever empty gut. My behalf, Summer enjoyed every bite of it. The two pieces vanished with just blink of an eye. I don’t want to deprive my self and had settle for some scooped mangoes and fuschia dragon fruit chunks. Which later, I regret I should have not eat those. 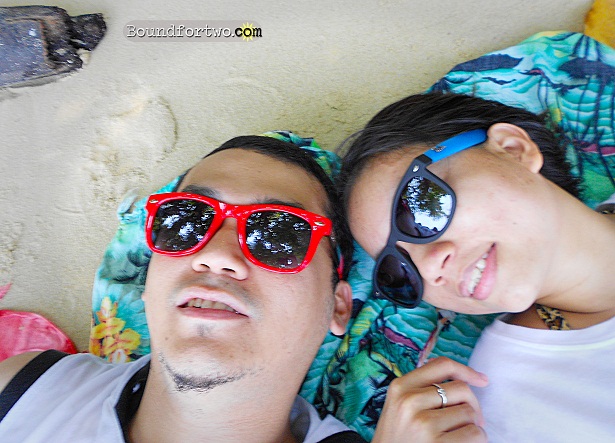 After some quick bite, we lie down and marvel the beauty of this isolated beach. We had been longing to do this for quite sometime. If you didn’t know, we adore beach bumming. Literally bumming, not doing anything, just lying on the sand and hear the splash of the waves and embracing the cold breeze from the sea. We’re fond of acting  like a cast away in a Survivor series minus the crowd and this photo op. 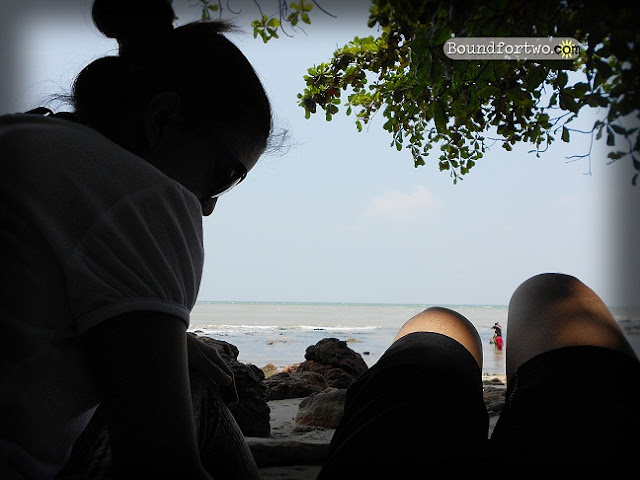 While I was dreaming of snorkelling in Ko Phi Phi,  Summer was busy kneading her legs, thighs and ankle. She told me of something that I didn’t pay attention. If I cared to listen  that could have save my demise which I share on a separate post. 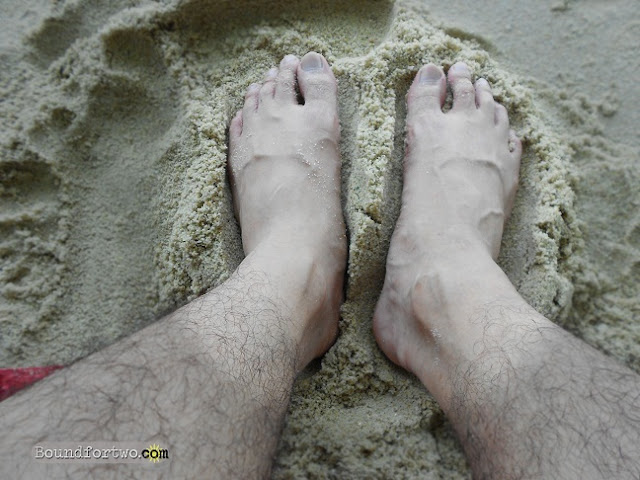 My exhausted feet had reunited again with the sand but this time in Pulau Intan, Malacca Malaysia. The last time I soaked my feet was during my nephew’s birthday celebration at  Camp Holiday in Samal Island Davao. Which was happened two years ago. By now you’ll know how eager and desperate I am to go for this trip just to appease my wanderlust. 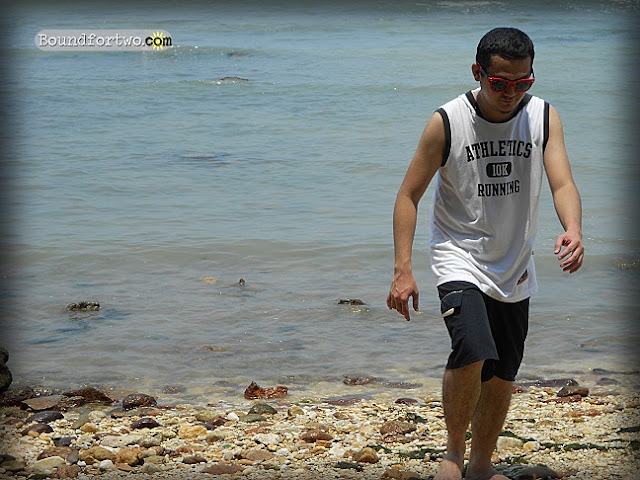 Swimming on the beach is actually not our plan, but just in case we brought some extra clothes if we got lured by the sea. This time we pass, the rocks and murky water is not appealing  to swim and heard it’s current is unpredictable. Aside from that, the low tide gives us enough reason, so we back off.

It’s known that the opposite archipelago is visible during daytime. But I couldn’t glimpse the island of Sumatra from a distance. The big boulder with moss  got all my attention. This huge rock might be an eyesore but can’t deny it’s contribution to marine ecosystem. As I take closer look, I saw a bunch of hermit crabs took a refuge on it. Who knows, this boulder might witnessed the greatest battle between the Portuguese and Dutch. If this one could speak I would love to listen all the day long what did happen on that biggest maritime war during the 17th century. 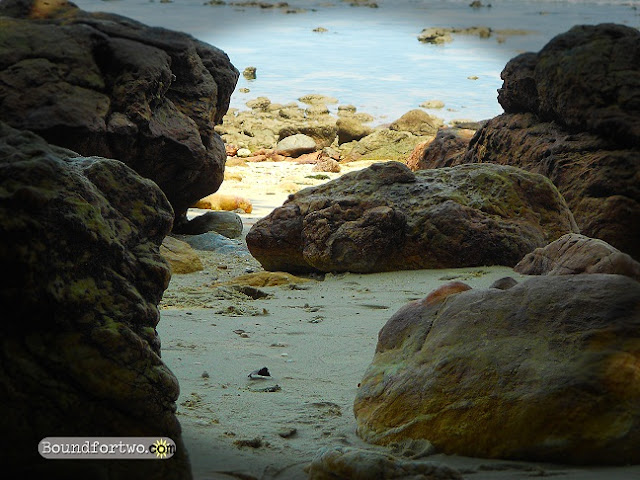 Time flies and haven’t notice an hour had already passed when I  started roaming around and inspecting the rocks of Pulau Intan like a geologist.  I was just amaze on it’s different shape, colour and formation. 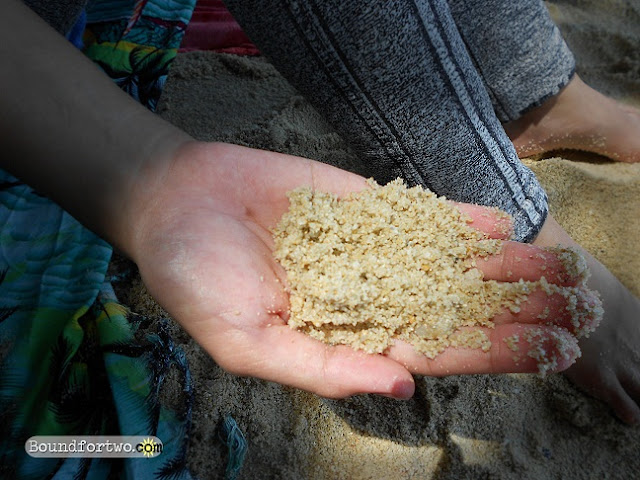 While I was busy with rocks she was preoccupied with Pulau Intan’s sand. She describe it as central sugar like (brown sugar like) and it’s coarse not refined. Being a sand collector she knew the technicalities which this sand belongs to. 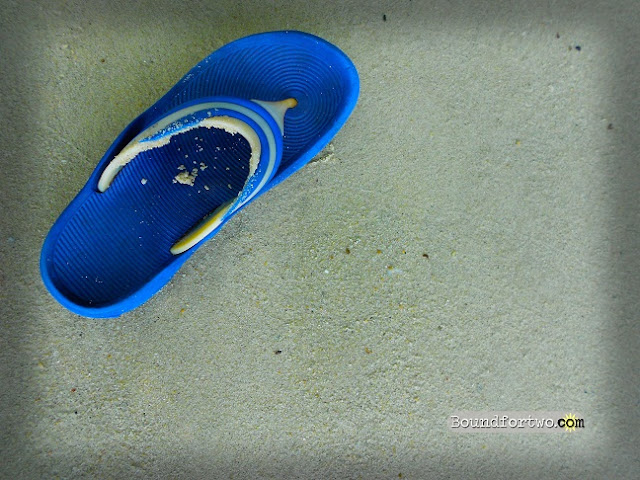 Before I rejoined Summer on the shade, I saw this alone slipper. Random thoughts played on my mind after seeing this. For me “The person  intentionally left the other pair on this beach so that he/she have enough reason to comeback in this secluded beach”
For Summer: “That person have forgot to take his slippers, the one stay and other pair might gone away to the sea”
Somehow, Summer’s innuendo remind me to bring my slipper, for God she knows how forgetful I am for keeping such things.lol
What is your thought why this sole slipper is alone on the sand?
Beach Bummer:
Sky and Summer
Facebook Comments
No comments yet