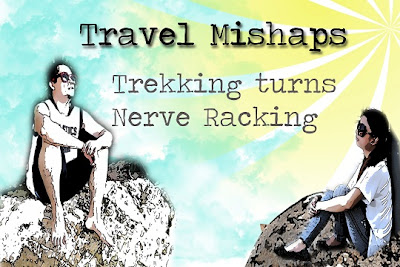 14:30 20/8/2012 Travel Mishaps is a new series in our blog. It’s a tale about our misfortune on the road and how we deal and learn from it. This series is not about attracting the unfortunate events or orchestrating a misadventure just to have an epic to share. Knock on wood, we don’t want any of it. But there are  things that bound to happen which is beyond our control. That is a kind of story that we’ll gonna share.

If you read our last adventure in Pulau Intan and Tanjung Tuan you might now have a clue. It all started when we go down the slope from the lighthouse to Pulau Intan. As we continued our descent, my knees began to tremble and I was two meters behind from Summer. She was keep asking, if I was ok, all I could respond was fine and nod.  I halted every resting hut, wiping my drenched body full of sweat and took a deep breath which we did until we reach the foot of Tanjung Tuan and marvel the beach of Pulau Intan. I had felt some numbness in my ankle and knee but  I just stretch it and somehow temporarily relieves the pain. 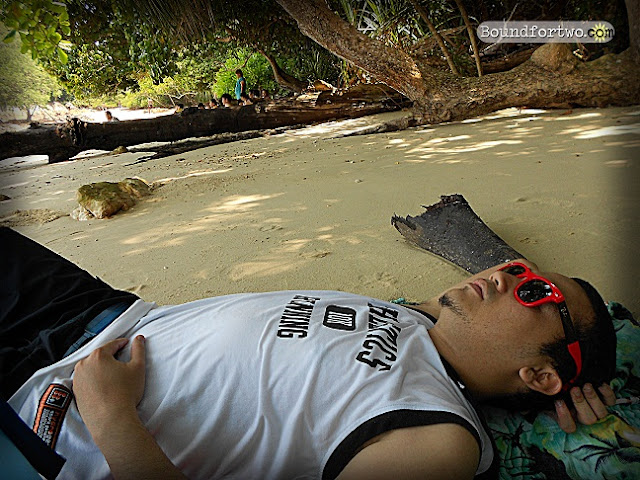 Since I had lost my appetite over the food. I opted to gnaw some mangoes and dragon fruit chunks for the sake of eating. I lie on the sand with our sarong as a mat and doze a bit. 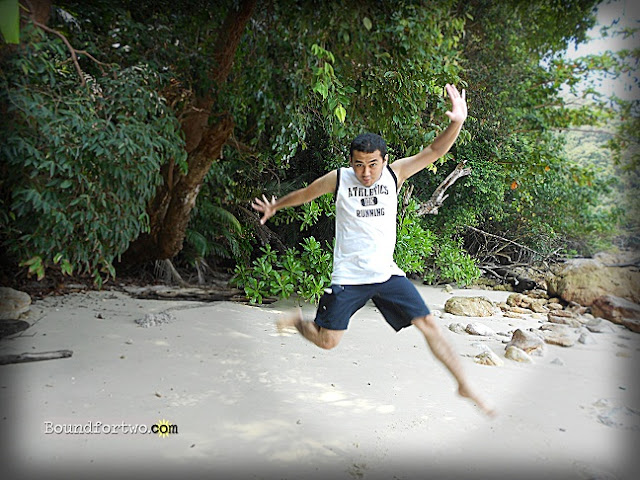 Of course after a siesta, I ask her to snap me on jump shot as memento for stepping in this isolated beach. After several takes and jumps, the point and shoot camera got this one, not bad. After a while, I felt my whole world started to spin and turns black. Summer force me to gulp a water and voluntarily to breath in and out. Overdoing a jump shot has taking a toll on me, I thought. Few minutes, we deserted the beach and head back to the Cape, a very bad decision.
Just merely a five steps, I was heavily panting and my body was about to collapse, but I just keep it to my self as I don’t want to delay our return trip and miss the bus. I manage to climb up halfway then all of a sudden, a pink slimy particles burst out from my mouth. It’s keep on gushing like there is no tomorrow. A few folks pass on our trail asking If I need help or medical assistance, I just give them a thumbs up. Judging by the colour, I knew it has something to do with the dragon fruit that I took during lunch. Summer half jokingly told that if we came back here and see the dragon fruit, that must be came from my puke. I still have the time to laugh about it despite of my uneasiness. Summer had  put some balm on my nose to sniff so I could regain my senses. Somehow it partially relieved my discomfort. We took the steps one at a time until we manage to reach the lighthouse. It doesn’t end there. We need to walk more than 700 meter from lighthouse to the gate and another two kilometres from gate to the highway. 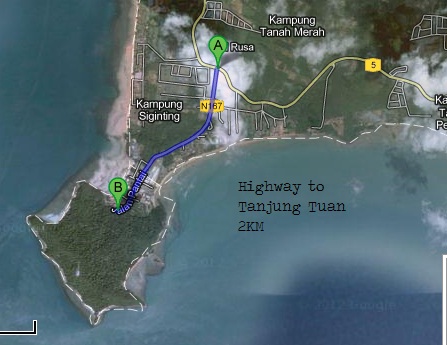 I knew something’s not right when I felt a burning sensation on my ankle. But I push it to hard until we pass halfway of Jalan Pantai. Then, I felt my thigh crippled me and boom I’m on oblivion. Summer immediately throw out my backpack and assisted me so I can sit on the pavement. I removed my shoes and was half lying on the side street. I began to bawl as excruciating  is unbearable. If you had experience muscle strains in the thigh, you’ll know it’s worst than being kicked in the balls. I knew that I go beyond the limits and tore the muscle fibre big time.
Next thing I knew, Summer was yelling for help to every commuters who passed by. Shouting on top of her lungs, Tolong! tolong! tolong!(same with Tagalog but differs in spelling) until her voice was fading. But no avail, none of them even interested just for the sake of humanity. A few just gazed from their car window and then sped of. To give you an idea, the road where I got down was in the middle of a beach road which cars passed every 3-5 minutes. So its very improbable that will be neglected. But our luck wasn’t on our side. I was disheartened not because I injured my self. But I had experience that in this part of the world, kindness is relative.
I ought to my self that we need to keep walking just like Johnnie Walker. Or worst will be stranded in this remote place where no help can be found. Until we halted on a resort, in which we can barely recall it’s name. We stayed their like 30 minutes, standing outside.Trying to figure out if we’ll wait for taxi (which appears once in a blue moon) or seek help from the receptionist on that resort. We choose the latter as it’s more likely possible rather than waiting for nothing. I queued up on the reception area to call/ hail a taxi for us. While I’m still waiting, Summer had strike a conversation with a  white guy together with his family whom they’re  spending a holiday on that resort. She had explained our predicament why we’re stuck outside and why I’d walking difficulty. Without any hesitation he offered us a lift to the highway. By there we can wait for a bus to Port Dickson town. We said yes, we’re not in a position to say no in this untimely circumstance. He told us to wait for moment so they can checked in their baggage before they can dropped us off.
My vivid mind still remember we hopped  on a red pickup that brought us to PD town instead on the highway. There were only few discussion during the 17km drive. He asked if I need to be dropped to the nearest hospital but we cordially refuse. We knew it will cost us an arm and  leg(with injured thigh) just for medical checkup. how much more for hospitalization. We politely told him, if they could drop us in the town bus station, it would be great. Before we disembark we thank him and his family for a benevolent heart  for giving us a lift. We introduce ourselves and we’ve come to know he’s also an expat. His name is Roger Skillen, from New Zealand, currently living in KL. I told him, that I will be forever grateful and cherish his act of kindness.

I would love to let the whole world know that his act of kindness should be acknowledge not left to be unnoticed. He offered a lift without expecting in return and even drove us more than a mile (perfect description of running an extra mile). Our view of no one will help us on that isolated area had flipped 180 degrees because of this man. We never expect to meet a good hearted soul in that unexpected place. Summer recalled, he was sent by an angel to rescue an unfortunate wandering souls. Indeed, thanks Mr. Skillen from the bottom of our heart.

Back to my case, I’m now fully recovered after taking some medications and rested for a week. You might asked if this deter us to stop travelling, hell NO! Just two weeks after this incident, we had travel  more than 600 km up north to Amazing Thailand. Which we’ll be glad to share it on the up coming entries. We will never not stop catching misadventures as long as we’re able. lol


10 Things that we learn from this mishap

1. No brainer, must eat breakfast if you’re bound for a long trekking or hiking.

2. At least warmed up like stretching or do physical activity a day or two before the actual trekking.

3. Must know or familiar with the place that you’re going to. Getting a map, wouldn’t  hurt you.

4. Heed the warning of your body limits. If the ankle is paining, then put an extra pre caution. if thigh are weakening and getting firmed  give them a massage.

5. Only bring necessary stuffs when trekking. An additional books or gadgets can be burden for day trek.

6. Don’t hastily reach the summit or the destination. Have time to relax, breath and hydrate one self.

7. Don’t overdo a physical activity especially if your stomach is empty. If you can’t stop jumping for snaps, then one jump with blur photo will do.

8. Have an ear to listen with your partner or buddy if he/she remind, warn you about some things. Like what Summer told me to massage my feet, thighs and legs in which I shut my ears and just doze.

9. Carry  a medicine kit during the trekking. In which we haven’t. An aspirin, analgesics or pain relievers could have ease that muscle strain.

10. Let someone knows about your whereabouts. Like Tweeting or an update an FB or a letting know a close friend or family member. In case, an unfortunate event may arise, at least someone knows.

We hope we I learned from it and hope to avoid them in the future. In case not, a repeated and another Travel Mishap of Trekking will be a sequel.

Not so Lucky Guy,