8:50 29/9/2012 The sun had just show up when we arrived at the Gohtong Jaya base station. A remarkable sign  conspiring our first Genting adventure. After seeing the colorful cable cars decelerating to the platform, we felt a sudden  burst of mixed emotion. Excitement, fear, and curiousness. We’re too excited to hop in on our first gondola lift that will bring us to heaven Genting Highlands. How our fear of heights supersede that enthusiasm and make our eyes shut for the whole journey. And how this plight made us more interested and somehow ponder of the safeness of these cars suspended more than 10 meters from the earth.

EXCITEMENT
A massive tower supporting the cable car welcome us in Gohtong Jaya station with a promise of thrill  and awe-inspiring view from the top. That promise fuels our soles to proceed and get rid off that bitchy altophobia. We didn’t wasted any time and directly went off to cable car platform. 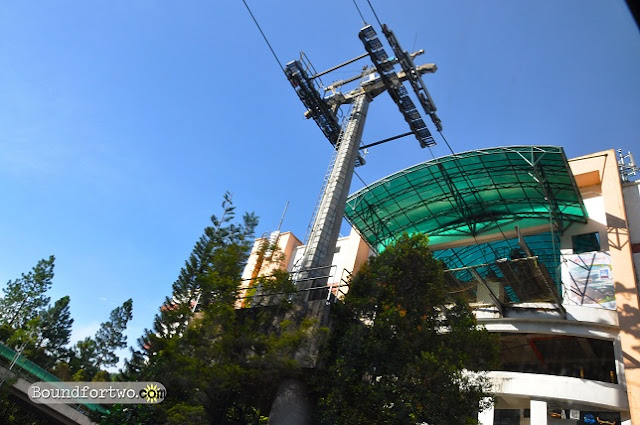 Since we’re early birds, so we catches the worm gondola and excused ourselves from the long queue. We’re wise enough to let the oldies overtook us and let them filled in the lift so we can occupy the whole cable car. But our plan didn’t succeed, the two old men jump in to our gondola and share the ride with us. 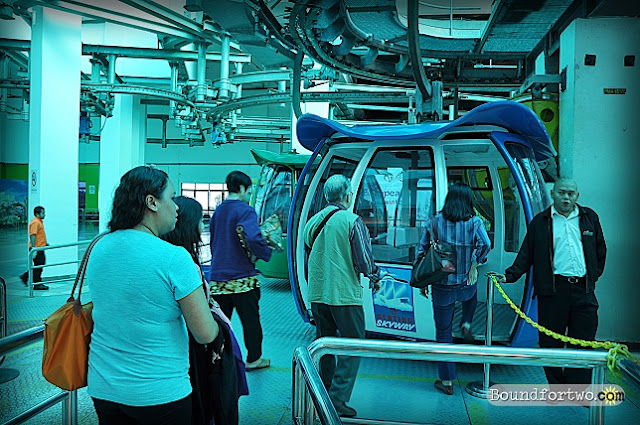 Not complaining but we just nod and let’s see if they can bear our insanity. The moment we stepped on the cable car floor we felt relieved and had loosen a bit. Our cable car experience would be different if cable car bottom is crystal clear just like in Hong Kong. It would not only drive us nuts but surely petrify for the entire course. 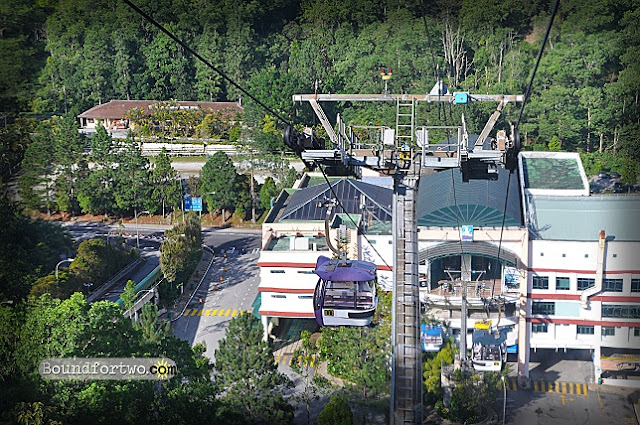 When the rope had started pulling up our cable car, an immense force from our gut started to blown up. An indication of messy retch if can’t be controlled. Whoa, that’s was only an initial reaction, same like that when an air plane started to take-off. The abrupt ascent caught us by a surprised.  But hey, do you think we’re modest when that cable car climbed up. If the video was not mistakenly deleted, it will show us how crazy we were during the initial ascend. 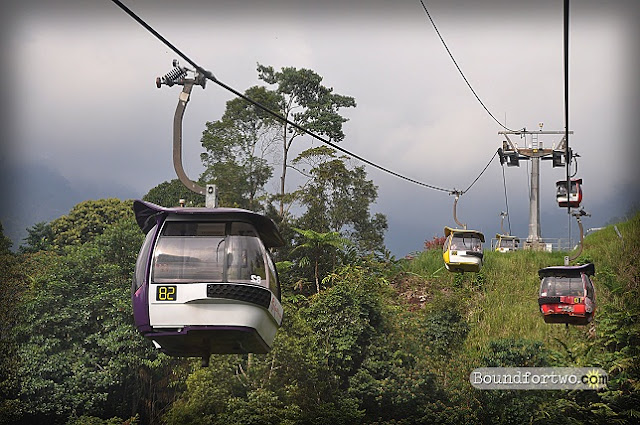 Good thing the old fellows didn’t bother with our sporadic screech when we realize that we’re hung more than 100 feet high.
FEAR
Excitement immediately faded and replace by fear. We confessed it’s our first time cable car ride and both of us have fear of heights. But why we should endure this crazy ordeal? Simple, because we want to overcome altophobia at the same time we want to witness the majestic 360 degree view of Titiwangsa mountain range. 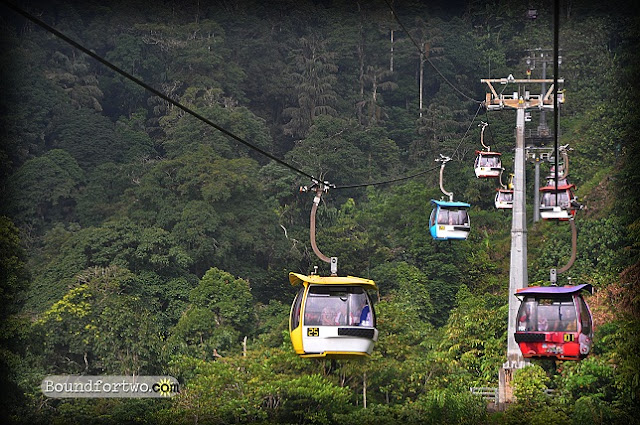 Anyway after that primary kick, we can’t help but groping the pole tightly inside the gondola. The cable car silently moving  by a rope from tower to tower. It gave us that constant shake each time a loud shriek during a gondola passes the pylons. Anyone who had a first experience riding cable car in Genting Skyway knew how it could be terrifying for newbies. But it will be only for few minutes then we get a hang of it. After all, it wasn’t that shitty scary compare to an extreme ride like roller coaster.
CURIOUSNESS
The subtle journey made us more inquisitive how these cars able to move  and reach the top of Genting highlands with a rope and how safe it is for public commute.
Before we reach to Genting Highlands we look back and ponder how the cable car propelled us to the top in less than 15 minutes covering a distance of 3.38 kilometers. 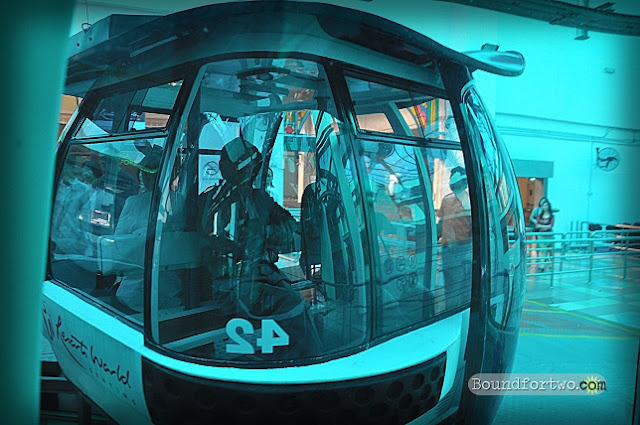 The Cable Car or passenger lift that can hold 6-8 people inside. This is connected to a cable by a grip. 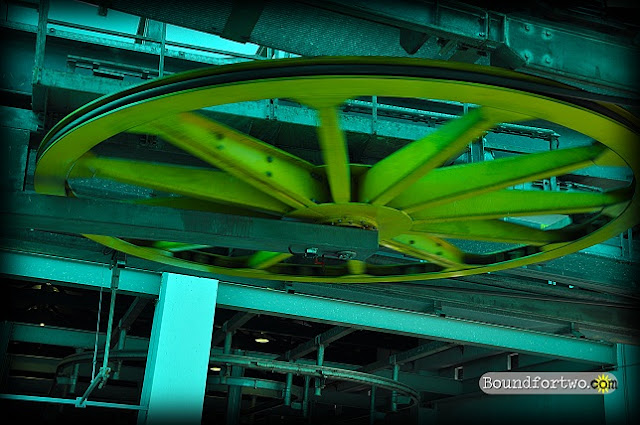 Rotating wheel which help to propel the cable car through the haulage rope. Genting Skyway cable car is an example continuous systems. 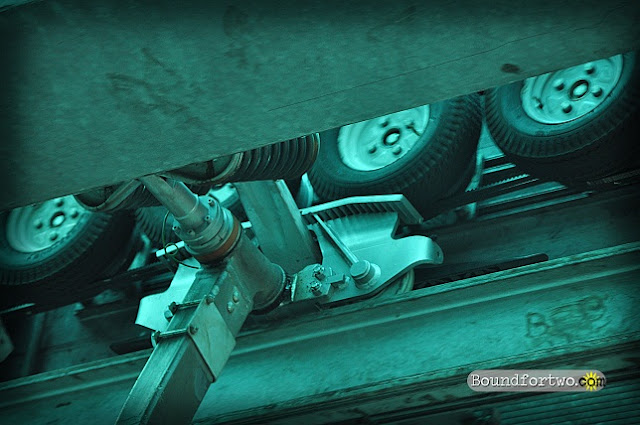 Suspension and brakes which decelerates the cabins upon approaching the platform so the passengers can embark/disembark. 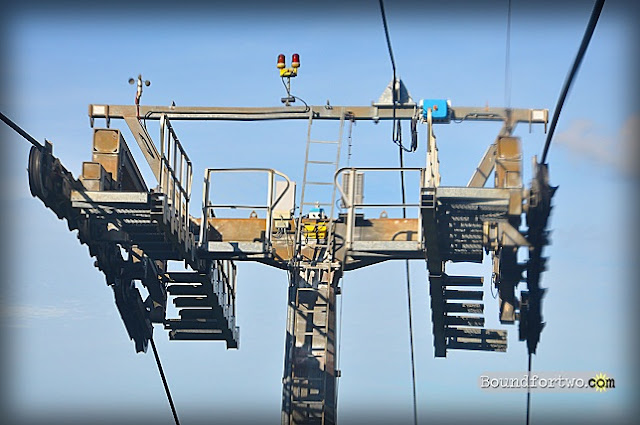 Of course a multitude of support towers/ pylons dug 40 meters bedrock . This towers made the cable car long distance journey possible and safety.
Speaking of safety, no one was reported harmed or any accidents occur since from the start of operation in 1997.  Dare you to google it and you’ll find nothing. Thanks to its  safety features which utilizes Swiss technology couple with routine maintenance to assure its optimal performance and avoid any disruptions. So riding the Genting Skyway is relatively safe. Source 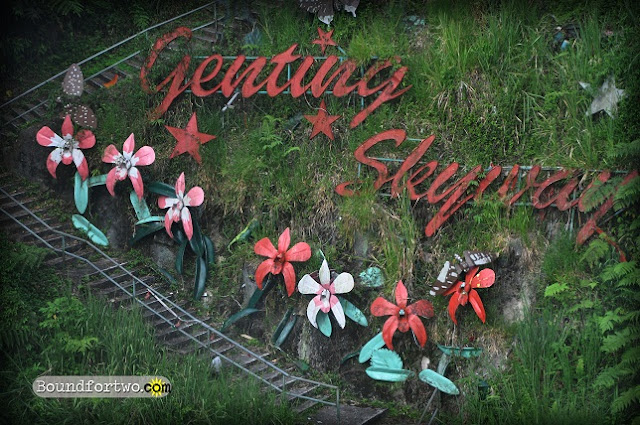 It was a sigh of relief after seeing back the Genting Skyway welcome signage when our cable car descent to Gohtong Jaya station. Our trip in Genting doesn’t end there. We binge at   Coffee Terrace, sip a coffee and chasing the fogs which we’ll be covered on the succeeding entries.
First Timers,
Sky and Summer
Facebook Comments
No comments yet