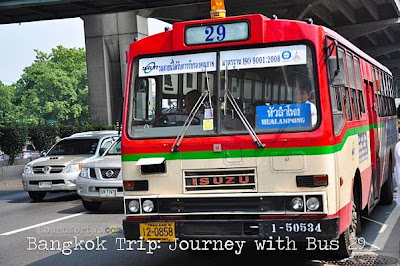 11:05 12/10/2013 When euphoria wears off after exiting the arrival hall of Don Mueang International Airport. It was replaced by semi panic mode  which recalled our early dilemma. Where to find that public buses. It may be sound easy but if  you’re in a country where English is not widely spoken then it would be acceptable as a challenge. We roam around, trying to get much information that would brought us to public bus stop. And by doing it we must exposed ourselves to the hordes of touts which eventually made us more puzzled. Most of the people we approached, pointed us to the comfortable air conditioned buses, which not the one we’re looking. Desperation kicks in and would have taken that transport. Not until we bump to a lady that showed and lead us to public buses. 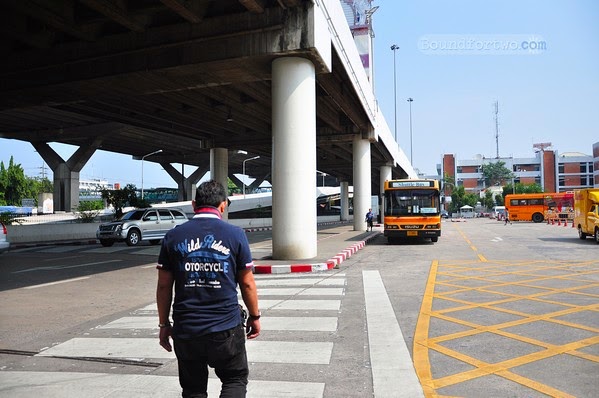 As instructed by that friendly Thai lady, we head to door 2 and exit with confidence, trying to conceal our dubiety. Walking along with locals made us feel the sense of belongingness. We felt loosen a bit when we saw that local Thais doesn’t look much difference to us Filipinos. So we easily blend in to the crowd. 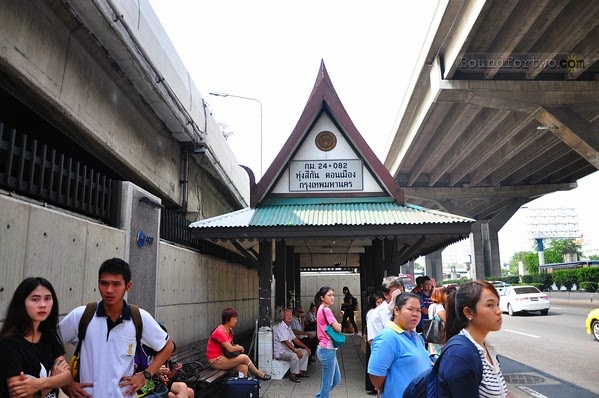 We asked a couple of stand by commuters if we’re in the right bus stop by mentioning Bus 29. All of them happily responded to our query. By that we concluded Thais in general are helpful and friendly. We feel at ease the moment we saw that tri-colored cranky looking bus with a siren light on it’s top. 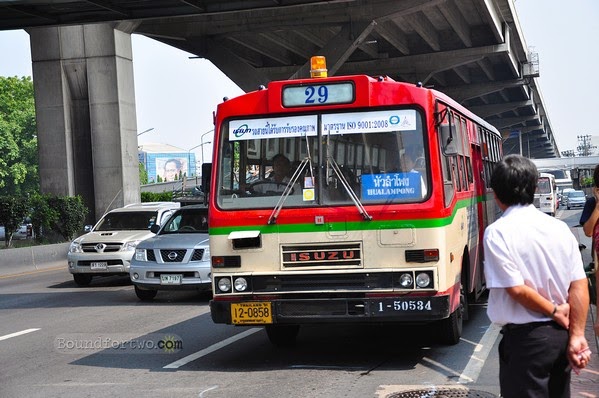 No mistake, the number 29 says it all and an English translation of word Hua Lamphong. We hastily get into the bus and secured a back row seat. It’s advantageous taking this space as we could see all the people hopping in and out. And we can also observe how locals behave inside the bus  just rolling our eyes sans turning our neck. 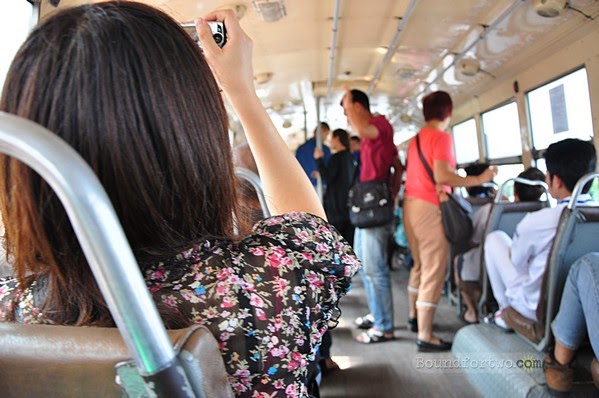 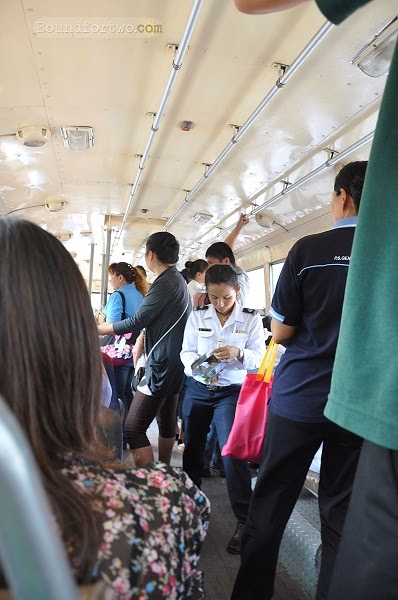 After few minutes when all the passengers settled, a Thai lady that dressed like a 1st officer pilot came in and started to collect the fare. First thing that we noticed was her pretty face that looks like a celebrity portraying to be bus fare collector. Thus, this maybe the reason why we saw more local Men riding the public buses. Our eyes were glued into here, then silence broke when she approached us. She asked in Thai where were heading. We respond Hua Lamphong and she returned a warm smile and friendly tone of Khob Kun! She gave two tickets and we paid her 13 Baht. No Kidding, bus fare from DMK to Hua Lamphong only cost us 6.50 Baht each. Damn cheap! 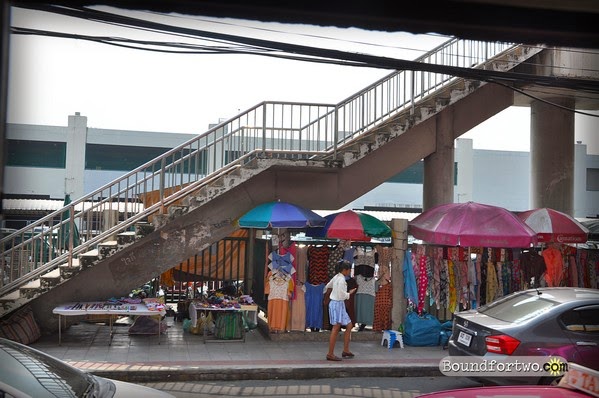 When our bus trapped from the notorious Bangkok traffic, our attention diverted to the sidewalks. The  vendors and overpass pedestrian reminds us  of same scene in Baclaran in Manila, Philippines. 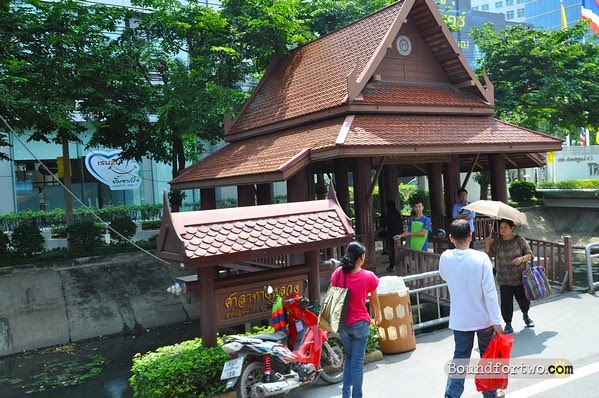 Bangkok and Manila have so much in common except to this Thai ornate designed bus stops. Which looks more of a house rather than a bus stop.
Taking the public bus 29 not only save our bucks but at the same time gave us the opportunity to peek the daily life of locals in Bangkok. Students who just went off from the class, street food vendors happily serving their patrons, and commuters who waited patiently of their respective buses. 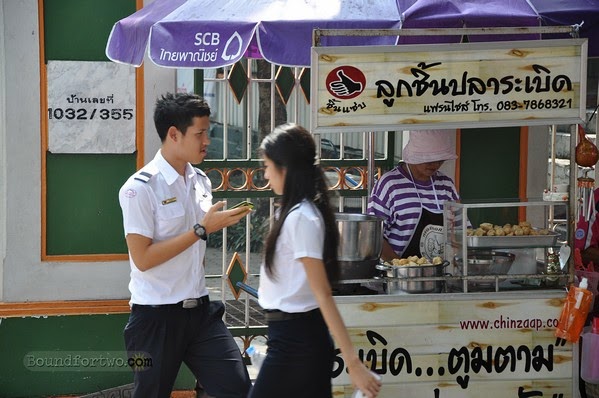 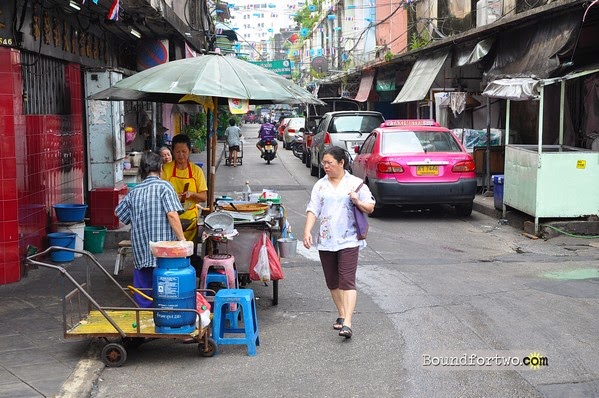 Our eyes feasted from the side walk vendors that sells yummy looking food. We almost come to a point to disembark and pursue our street food cravings. But the traffic and humid weather forbid us to step out. 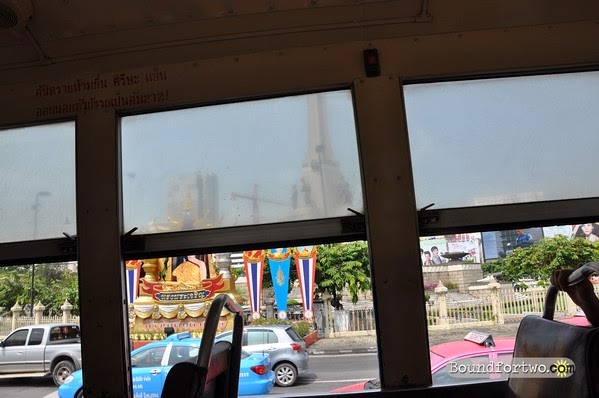 We heard from someone, that we’re passing,  the Victory monument, so we took a quick snap.  Errr failed! Too bad, we’re unable to capture the whole thing as the bus ran too fast. It’s more of a military monument that symbolizes victory of Thai over French colonizers.
We knew that bus 29 will halt at Hua Lamphong Railway Station. But want to know how soon it would be as we’re too excited. We asked a student looking guy  behind our seat. He said, that we’re almost near to our destination, estimated time of ten minutes. After exchanging pleasantries he introduce himself, Nat. He’s Mechanical Engineering graduating student in one of Universities in Bangkok. He was so friendly and kind enough to answer all our questions pertaining to Thai culture, religion and food. He became our instant tour guide and joined us meandering Bangkok’s Chinatown, in which we’ll be sharing on the succeeding post. 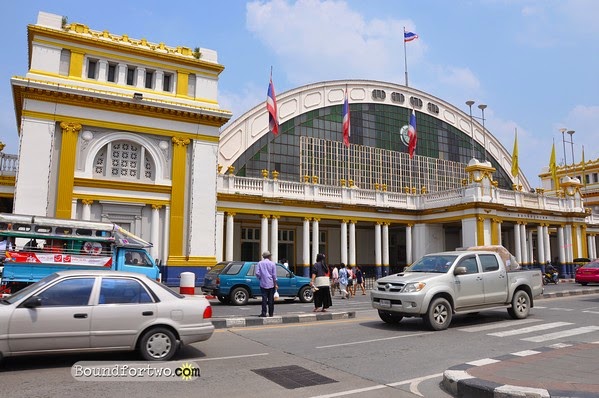 The conversation was interrupted when the bus driver stopped in front of Hua Lamphong Railway  Station.  Our 40 minutes journey with bus 29 had just concluded. We saved some bahts, peek a daily life of locals, enjoy the rush and traffic of Bangkok and best of all gain a friend from this  half an hour journey. Taking off that tourist helm paid off and let us discover Bangkok more intimate in our own pace.
If you come to visit Bangkok through Don Mueang International Airport (DMK). The Bus 29 can be found by exiting Gate (Door) 2 then turn right then walk about 100 meters. By then you must see Bus Stop. Enjoy the ride!
Note: Fare quoted in this Trip is based from the time this entry is created 30/11/2013. So it will change without prior notice.
Public Bus Commuters,
Sky and Summer
Facebook Comments
Comments (39)