08:25 12/10/2013 Spontaneous and unplanned. That’s how we described our weekend affair  in the bustling cosmopolitan of Thailand a few weeks ago. It was never a plan  to visit Bangkok, anytime soon. But a favorable circumstance came along the way and resisting it would only mean travel deprivation. The cheapo airfare was unbelievable, a kind of deal that you would never imagine as real.  A one-time  opportunity that requires impetuous decision and no second thoughts. A fortuity that  changes our  travel aspirations and made that dream to reality.

Just a night before departure, all our effects was scattered all over the place except for the maroon  passports, newly printed boarding pass and crisp thousand baht bills.  All were concealed in a pouch. After some 10 minutes and streams of  sweat dripping from our forehead. We manage to pack all the stuff in our Deuter backpacks . Everything was all set and ready to go. Whew! A slight improvement from a half an hour of packing from our Singapore Trip. We can re-brand ourselves now as “Last Minute Packers”. Hooray!
We didn’t wait till tomorrow and headed straight away to the airport. We had all  8 hours to burn before our scheduled flight. Roaming around the terminal was our first option to kill the time. Until we got tired and  hit a sack.  But where?  Not on its comfortable chair but on a cold and dusty floor.  For the first time, we slept in the airport. Another one for the books. 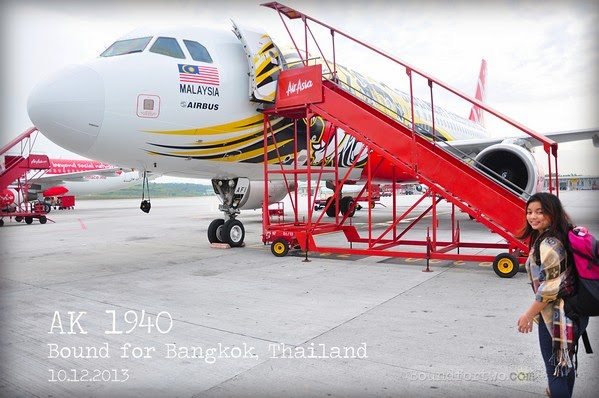 At 7:50, we boarded AK1940 that flown us over to the Gulf of Thailand. After two hours our plane touches down at Don Mueang International Airport (IATA code: DMK). Sawadee!  This will be our second time to visit Thailand after an unforgettable Hatyai-Songkhla trip last year. 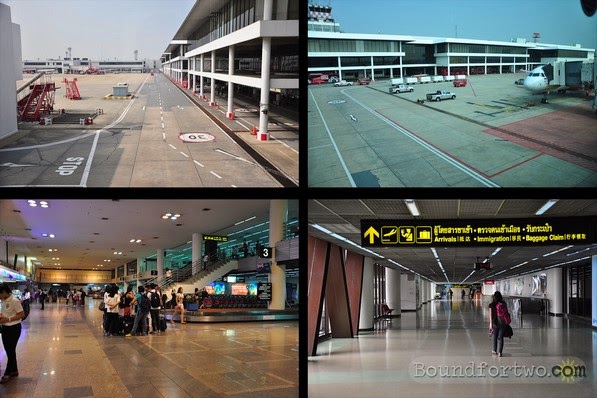 A gush of endorphins was released like an orgasm the moment we deplaned from the aircraft. Euphoria kicks in and  we both feel like we’re in Utopia.  Before the Immigration Officers suspected that we’re crazy on the loose. We  hid that contagious smile, get the stamp then wear it back after clearing immigration customs. Bangkok at last! We stayed for a while around Don Mueang International Airport taking some photos and jauntily refuse the tourist agency reps  offering their services before looking up for our transport. 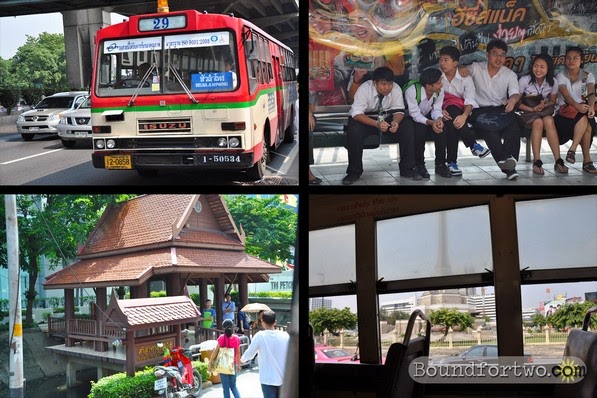 We took Bangkok’s public bus No 29  to reach our destination. A bus  ride that showed  us the glimpse of this vibrant  metropolitan. Urban landscape, sidewalk peddlers, traffic jam resembles of that in Metro Manila. It’s beautiful and not chaotic as what others construe on this capital city.

The 27 KM  journey cost only 13 Baht (6.50 each) which took us more than half an hour upon reaching Hua Lamphong station. 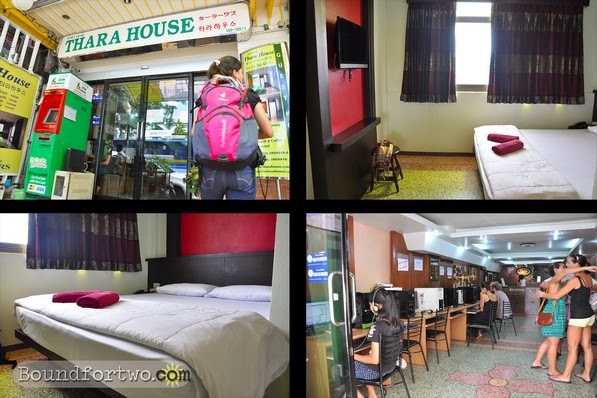 We picked  Thara Guest House at Phra Artit Road. Our home for an overnight stays in Bangkok.  It’s located near to  tourist attraction like Khao San Road, and Grand Palace. Aside from it’s superb location,  it truly gives a value for our money if talking about basic accommodation. This is highly recommended by backpackers. Yeah, we got to know Thara from Drew, a travel blogger friend who stayed long in this lovely guest house.

Where did we go in Bangkok? 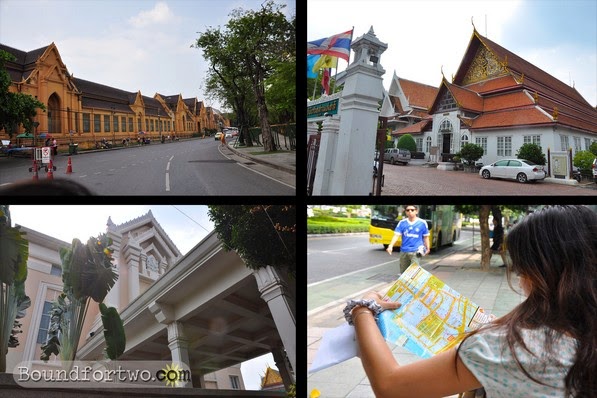 Armed with map and camera we explore the main attractions of Thailand by foot. First stop was Thailand National Theater than to it’s adjacent  Bangkok National Museum. Few hundred meters walk we halt at the White Elephants in Pom Pa Dad Junction near to Grand Palace complex. 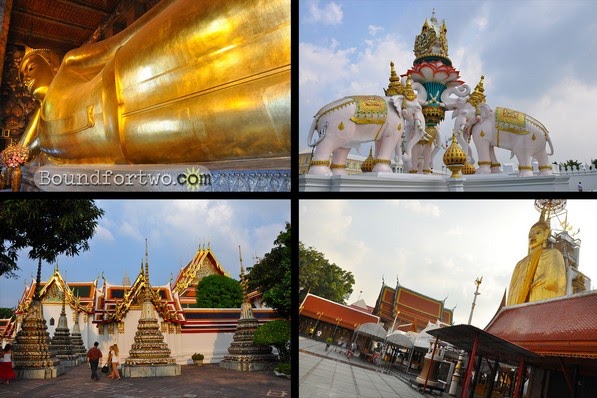 We’re unable to witness the charm of Grand Palace and awe inspired by its architectural wonder as they were about to close. We’re kinda too late for a sightseeing. A local suggested to visit the other temples in the vicinity and happily  point us to Wat Po. 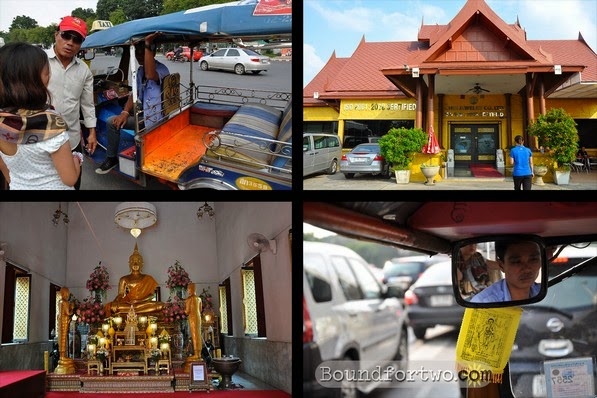 Before we entered Wat Po, we’d been approached by another local guy telling us the same thing. Being naive and had immense love for temples we’d been ensnared by this temple visit trick. Though nothing bad happened but an hour of time was lost. We’ll share the details of this scheme and how we played it in the succeeding post. 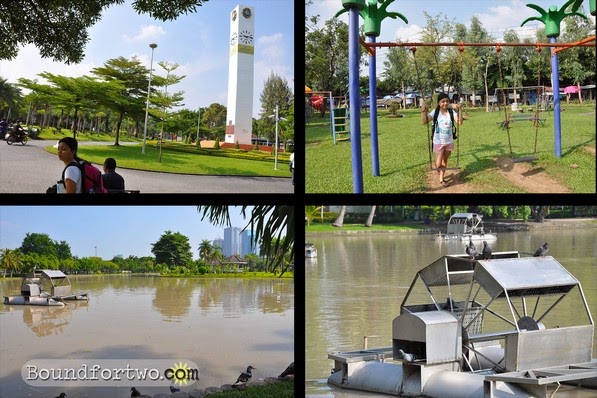 On the second day, we took a visit to the scenic view of Queen Sirikit Park. Just a quick stop before heading to Chatuchak Weekend Market. 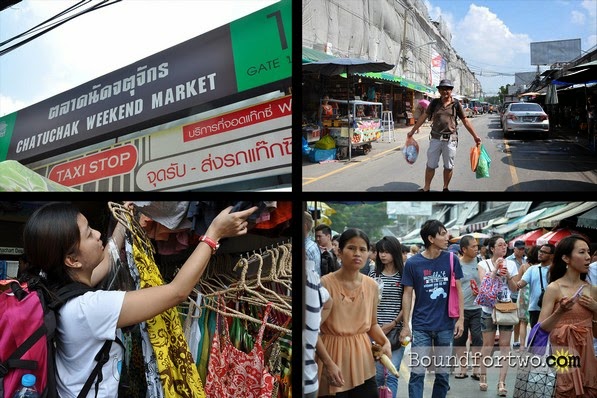 And shopping in Bangkok would not be complete if  not to visit the largest weekend market in Thailand, the Chatuchak Weekend Market. We went into a maze of stalls, bargain, and shop until our bahts vanished into thin air. We regret of not bringing an extra cash for buying the stuff that we fancied. 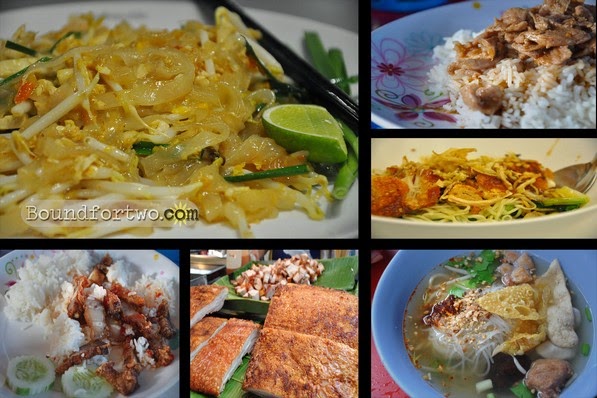 Aside from temples and shopping, Bangkok is known for it’s cheap and tasty food. Eating from the restaurant to roadside stalls and even from the peddlers we tried them all. The failure attempt of eating Pad Thai from Hatyai trip was accomplished in this Bangkok trip. 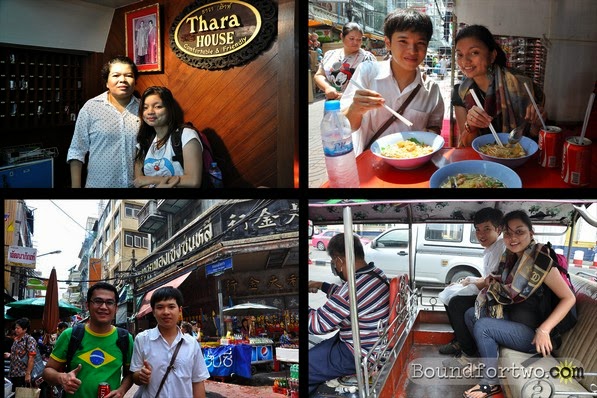 This weekend affair in Bangkok would not be memorable if not with the local Thais. Nat who become our instant tour guide and meander with us in Chinatown. And reintroduce Tom Yum in Bangkok style. And the friendly receptionist Nong, who made sure our stay was convenient and pleasant in their guest house.

So many things left unchecked and a weekend was not enough to cover Bangkok. It truly deserves a revisit. We hope that universe will conspire again to make it happen. Crossing fingers

0 Replies to “Bangkok Trip: An Overview”