08:26 07/07/2013 The room was still pitch black when our subscription to dreamland was interrupted. It’s too early, but a continuous ascending beep coming from our phone’s alarm stirred our consciousness. It was even less audible from a snore and somniloquy of someone in the dorm room. The snooze mode successfully break to end our slumber. With half lid eyes open we got off from the bunk, stretched  a bit, had a quick breakfast before aiming for historical jaunt.

With map on hand, we took off from temporary abode hoping for a perfect weather. It seems mother nature conspired this time as  sky was clear which promised  a good day ahead. Just opposite from our hostel, an old Chinese temple  Loo Pun Hong  known as Carpenter’s guild aroused our enthusiasm for heritage meandering. This edifice stood for more than a century before it underwent some restoration. 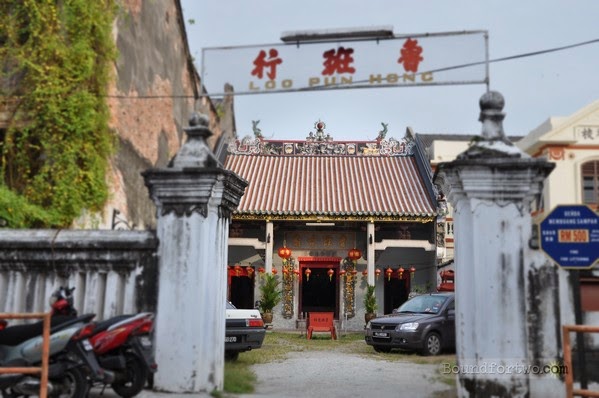 Walking at Lorong Love or well known as Love Lane feels like your’re transported in the past. We saw aunties pedaling an old bicycle with a youthful smile. On the other hand, uncles were vigorously riding their trishaws. 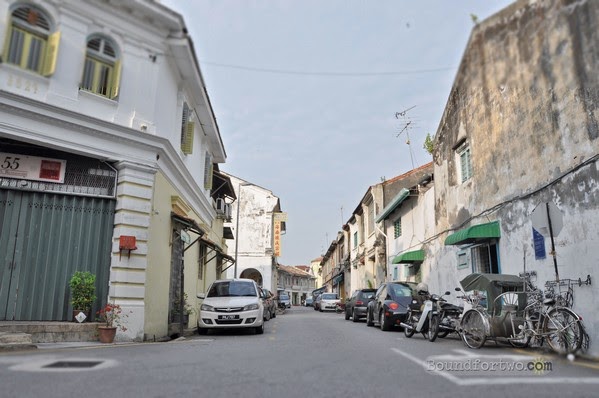 The whitewashed shop houses dated a hundred years back which still in a good condition. A common scene that we experience while traipsing Love Lane. Definitely a historical conservation at it’s finest. 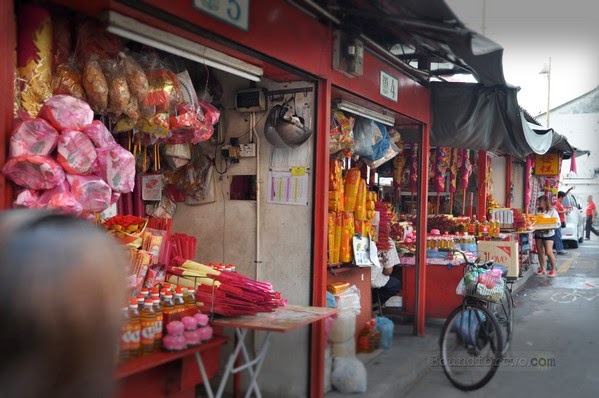 We head to Lorong Stewart passed by some Chinese stalls which offers different types of joss sticks.The whiff of a burning incense was getting stronger and that explained upon reaching the temple of  Goddess of Mercy between the junction of Jalan Masjid Kapitan Keling and Lorong Stewart. A pack of people swarming the temple saying their prayers thus leave us no choice but to veered away. 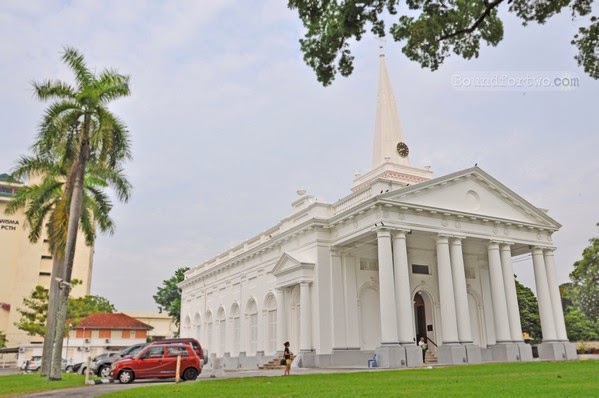 We continued traipsing along the corner of Lebuh Farquhar and Jalan Masjid Kapitan Keling. The white washed building topped with conical spire was absolutely stunning. Later we found out it’s St. George Church. The oldest Anglican church in Malaysia and whole Southeast Asia. 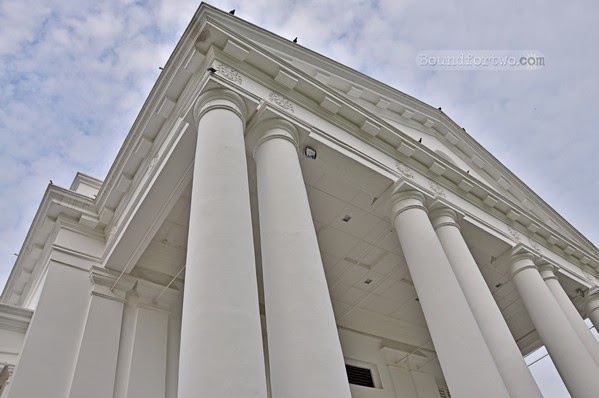 The impressive structure was built around 1816 and completed in 1818. The architecture was a fusion of Anglo- Grecian.  Without a doubt, the massive pillars of this building was influenced from Greeks.

Adjacent to St. George Church is the Penang State Museum. This museum houses some important artifacts like old paintings, photographs, maps and old documents that been part of Penang history. Since it’s too early, we’re unable to enter the museum  and just enjoyed the old cars displayed outside. 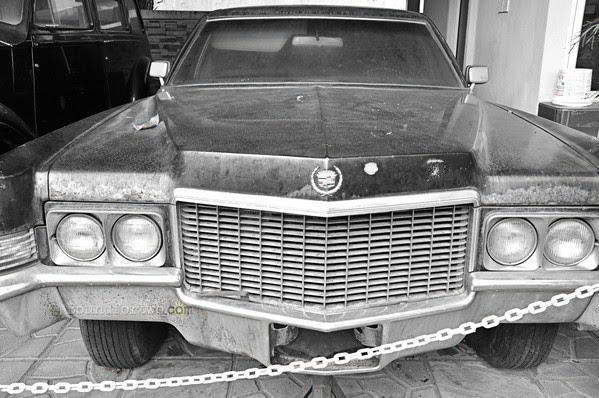 Then we proceed to another white washed structure next to Museum, The Church of the Assumption. This century old church was formerly elevated as Cathedral for three decades before it was transferred it’s status to Cathedral of the Holy Spirit. During our visit, there was some repairs and restoration and church activities was temporarily suspended. So we did’t have stood a chance attending a mass. We just said our prayers at the  Our Lady of Assumption grotto in front of the Church. 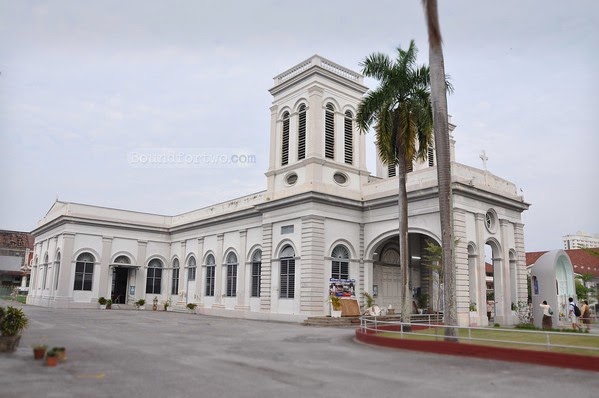 Then we ramble on the opposite road and follow Lebuh Light that lead us to grandiose complex structure of Mahkamah Tinggi Pulau Pinang ( Supreme Court of Penang Island).

The complex is mainly composed of columns and mini domes that resembles of old KL Train station sans the Moorish architecture. The buildings had underwent some renovations and expansion recently that justifies it’s newly painted facade.

Across the Supreme Court is the Session Court and Civil Magistrate where a monument dedicated to James Richardson Logan was erected. The monument had four different maidens representing the four cardinal virtues Wisdom, Temperance, Justice and Fortitude.
We continued traipsing at Lebuh Light then turned left to Jalan Padang Kota Lama where the light yellow-brownish building welcomed us. Penang Municipal Town Hall was one of most important building when Penang was still under the British regime. . 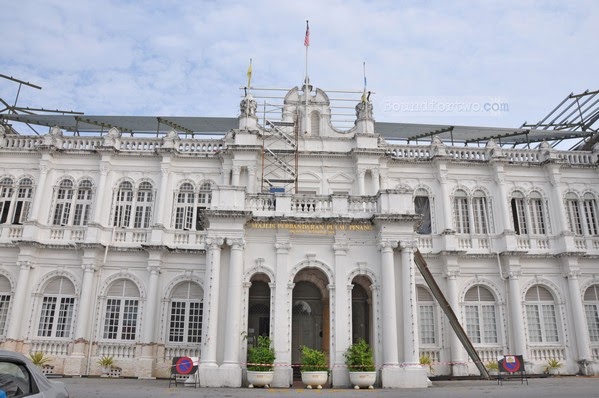 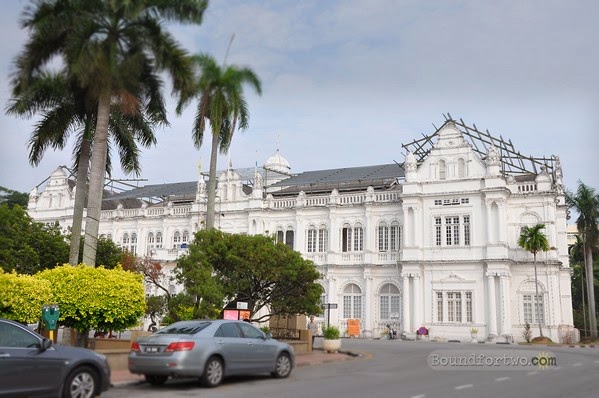 Just beside the Town Hall is the Victorian style building Georgetown City Hall. The elegant mansion like building was originally named Municipal Office before Georgetown was granted city status in 1957. From our visit, it undergone some renovations and roofs were repaired. The grandeur facade is best viewed along the esplanade to glimpse it’s entirety. 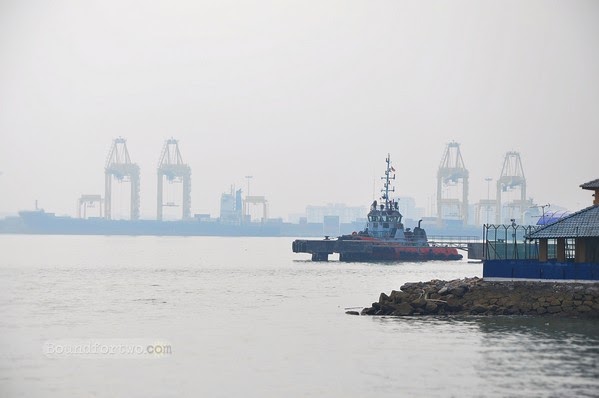 Our foot lead us to Jalan Tun Syed Sheh Barakbah and stopped near the breakwater. We took a quick rest while gasping some fresh air filled with brine. The busy movements along the port kept us preoccupied for several minutes before continuing the walk.

Not so far from where we stood, numerous rusty cannons were aimed at the sea. It was similar to A Famosa in Melaka. We got excited and rushed off to Fort Cornwallis (more details on a separate post), which happen to be  largest fort in Malaysia. 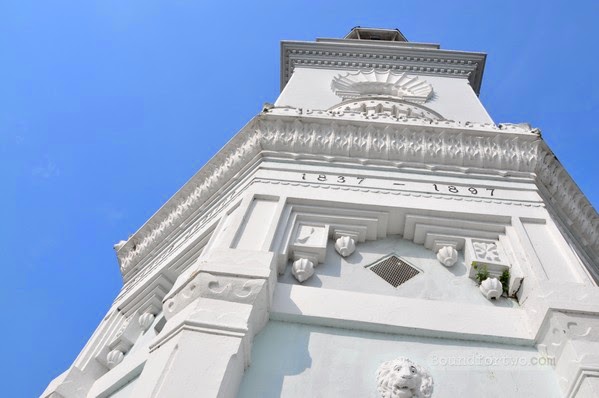 After roaming around the fort, a light brown onion shape dome with analog clock emerged from a distance. An urged to see this imposing structure rejuvenates our tired calves. We continued meandering and last stop was the Moorish style, The Jubilee Clock tower. Getting near to it wasn’t that easy, as the flow of traffic wasn’t pedestrian friendly.  But we manage to  criss-crossed at the round about and stared the old tower at 90 degrees for eternity. No matter on what angle we look at it, it’s tilted but still never lost it’s classical charm.

Our historical jaunt  to the UNESCO World Heritage Site of Georgetown concluded at Jubilee Clock Tower.  Definitely your time will gonna be worth spending here.