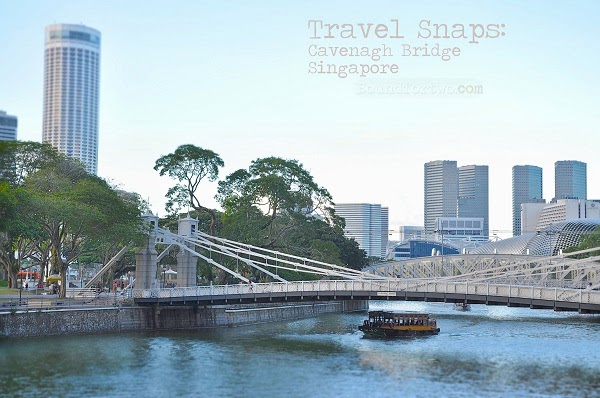 Travels Snaps: Features our best photos of iconic places that we visit during our previous travel. It’s a recollection of unforgettable snaps and story behind it.


Cavenagh Bridge is one of the oldest and only suspension bridge in Singapore. It was opened during 1870 and originally named Edinburgh Bridge but was later change to Cavanagh Bridge in honor to Major General William Orfeur Cavenagh, Governor of Straits Settlements during that time.

Now, this bridge is mainly used for pedestrian and vehicles are not allowed to pass. The bridge is located in the Singapore River, near to Fullerton Building (now Fullerton Hotel) which connects north and south banks.

It’s best to visit Cavenagh bridge during late afternoon, just in time when the sun fades away over the Singapore river. Also great to visit it at night as well, as spectrum of lights accentuates the old bridge.