12:25 07/072013 If there’s one food to describe Penang, that is Char Koay Teow. A notorious dish that proudly represents the island which had been a confluence of different culture and tradition. Char Koay Teow was invented as a food for laborers due to its cheap source of energy and nutrients. Evolving with time, Penang’s CKT elevated itself and now becomes every Malaysian’s favorite stir-fried noodle dish.

Our love for Char Koay Teow towed us 360KM North of Kuala Lumpur, to the beautiful and historical  island of Penang. Finding the best CKT stall in Penang was no a longer a secret. By searching it online, you’ll be ending up one in Siam Road or one in Lorong Selamat.

We picked one in Lorong Selamat as Doc Gelo highly recommended  this CKT stall. Thanks to Doc Gelo and his son Gabby for accompanying us  to the famous Kafe Heng Huat at Lorong Selamat.
Prior to arrival, we read some offensive and honest to goodness remarks about how expensive, rude staff and overrated CKT of Kafe Heng Huat. The more unpleasant comments about this stall,  the more eager were to visit it. 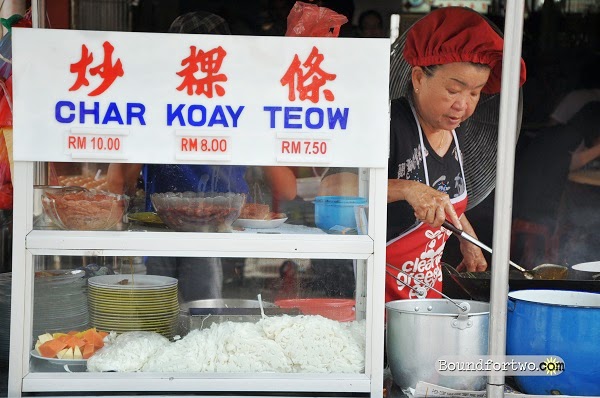 An image of an old grumpy, tattooed eyebrow, wearing a magical red beret auntie appeared on the facade of Kafe Heng Huat. She was known to be a snob, ill-mannered and making black face to her customers. Despite  her unfriendly demeanor towards people. Many still visit her stall to experience the best Char Koay Teow in Penang. 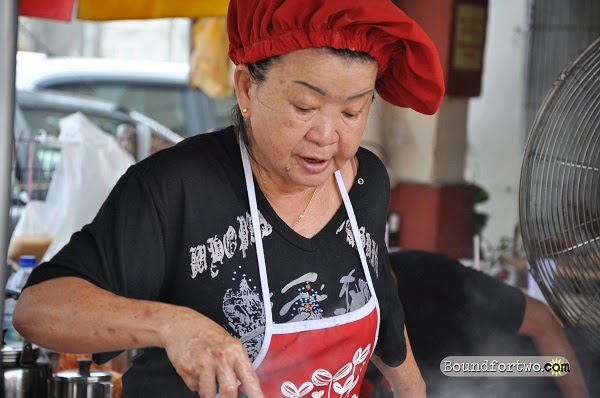 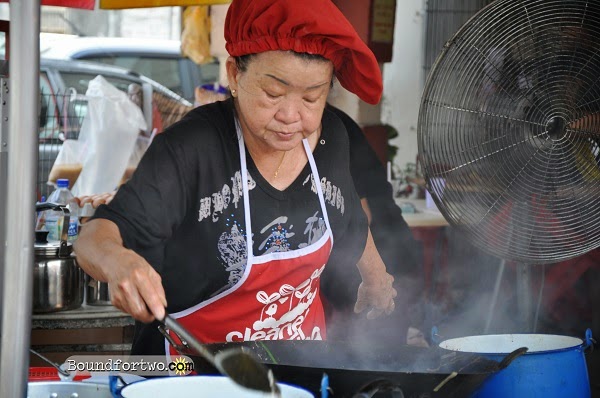 She incessantly tossing her famous Char Koay Teow on a charcoal heated wok and doesn’t mind how many patrons come and go to the stall. Auntie was very focus, consistent and can’t be move. We’d noticed  she cooked CKT one order at a time and that translated to queue.

The famous and best Char Koay Teow in Penang 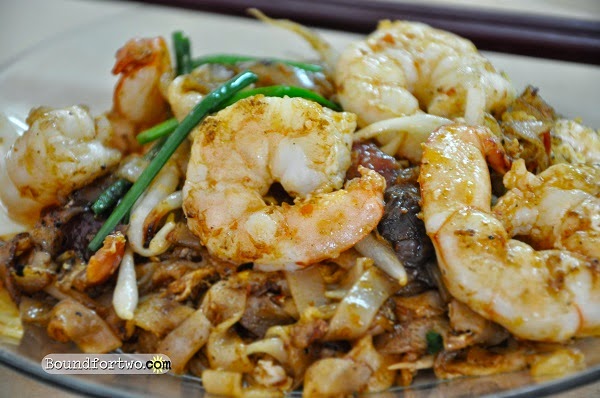 We only waited at least 15 minutes before a plateful of Char Koay Teow placed on our table. This greasy stir-fried dish is a mixture of rice flat noodles, egg, bean sprouts, cockles, Chinese sausage, Chinese Chives and their trademark toppings, BIG plump prawns.
The large plate cost us around 10RM  which is a bit pricey compared to the standard price of 5-6RM. But it’s all worth it, the big pudgy prawns makes it up and of course it’s unparalleled taste. We reckon it’s the best CKT we’d ever tasted in Penang, even in whole Malaysia. We savored each bite and emptied our plates with much gusto. 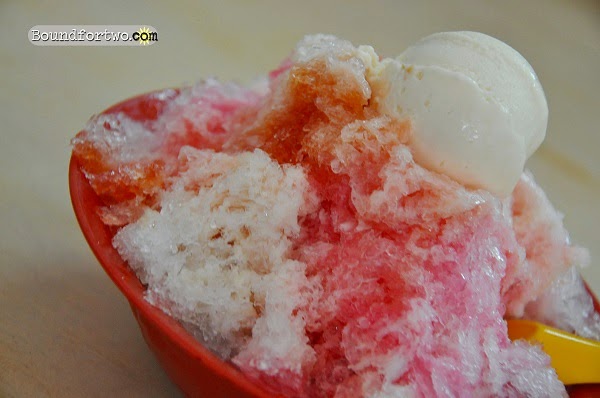 We ordered Ais Kacang topped with vanilla ice cream to paired our CKT. It’s similar to Cendol and a good dessert  to washed down the oily stir fried noodles.
Overall, our experience in Kafe Heng Huat was similar to those who made an earlier review about this stall. “Walking away with a happy stomach and much more love for Char Koay Teow”.
Address: Kafe Heng Huat 108, Lorong Selamat, 10400 Pulau Pinang.
Operating hours: Opens daily from 1100 – 1800 closed on every Tuesday

Note: This is not paid post or some sort, we just want to share our good experience with this stall.