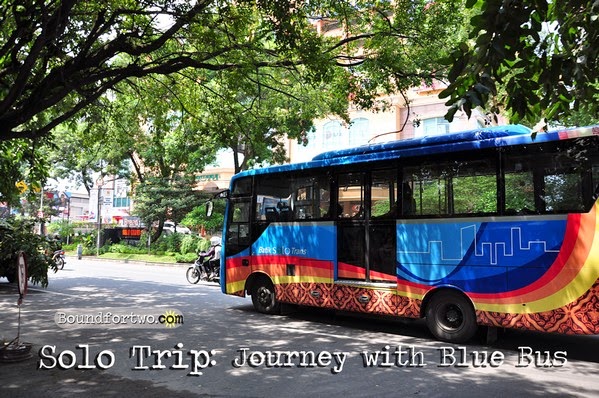 09:17 03/04/2014 Flustered,  that’s how we felt upon leaving the arrival hall of Adi Sumarmo International Airport. A minor setback was encountered during the customs check. It might be inconsequential but could be a potential downer. Instead we fortified our guts and disallowed that negative vibes to play our emotions. We kept our composure, relived that excitement we’d experienced earlier seeing the majestic Mt. Merapi and Mt. Merbabu up in the air. We said to ourselves “Let’s go ahead and conquer Solo”

The local tourism folks of Surakarta was just in a right moment when we needed them to ask for directions. The staff helped us through where to find that local buses that goes to the city. After exchanging pleasantries, she handed us the Surakarta map and guide for a quick start. She did a great job of impressing the first time visitors in her country. Well done Kakak!

Our instinct told us to avoid touts and just head on the parking lot where Blue Buses of Batik Solo Trans are waiting. For the record this was the fourth time taking public buses from Airport  to city destinations on an overseas travel not including Malaysia. The first was in Bangkok with Bus 29, second in Saigon with Bus 152 , third in Krabi. Each journey has it’s own unique experience and we’d hope to do a repeat in Solo. 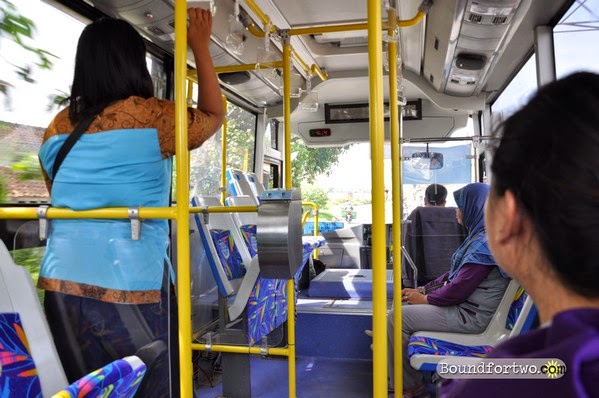 We inquire the bus staffs on the waiting area to confirm if this will take us to Slamat Riyadi before hopping in. They’ll responded with friendly nod and hand gesture to get in. We look for a comfortable space, then decided to settle in front near the driver’s seat. We thought of great vantage view in taking street photos while the bus is moving. 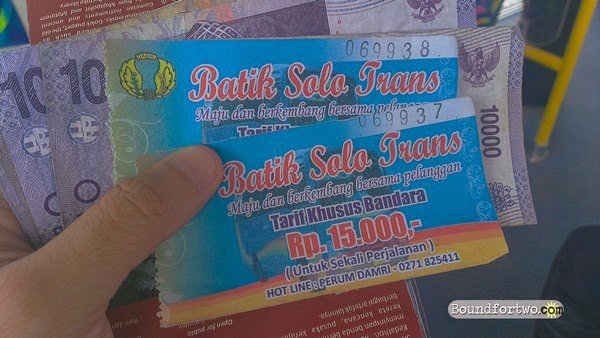 We’d wait for few minutes until no one joins in and the driver shut the door and hit the road. A friendly lady collector approached us with a smile and asked where we’re heading to in Bahasa. Armed with little Bahasa vocabulary, we responded Bandar, Jalan Slamat Riyadi. She got amused and probably thought we’re locals.  She handed us a ticket and asked to pay 15000. What? Before we could react of course it’s in local currency Rupiah. If converted only amounted to 1.24 in USD or 55 in Philippine pesos. Still cheap for an airport ride to city center. 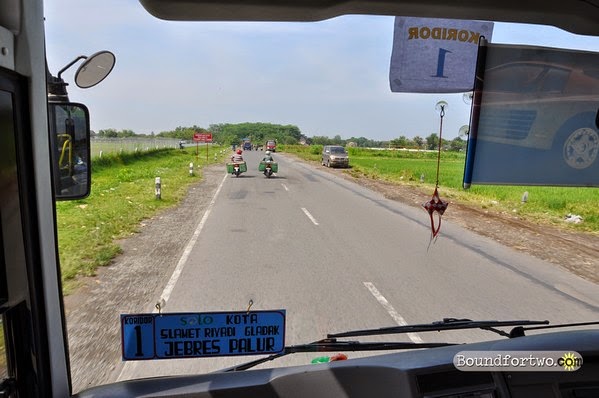 The road was well pave on the first few kilometers. It’s not a surprise since it’s within the airport vicinity. We heard a loud noise and felt it’s vibration inside the bus. The sheer force was immense, then a plane plane took off from the runway. It was our first close encounter with an aircraft approaching for take off. Looking at the fuselage, it  was the same aircraft we rode earlier. 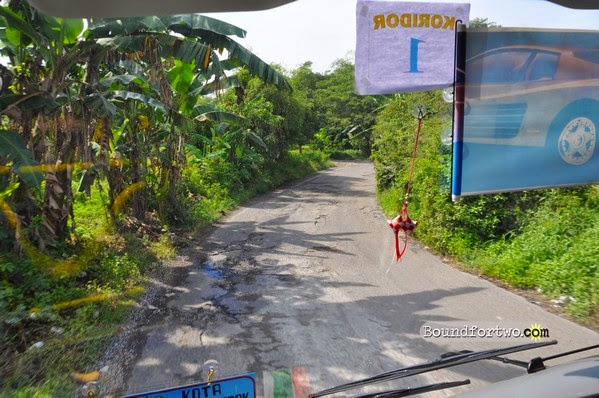 Back on the road, the driver seems relax and pretty much used to on this route. We passed on a uneven road with random potholes. Our driver was very skilled and steers the bus very well to avoid a bumpy ride. We gazed on the people at the back through the driver’s mirror. Surprisingly all of them doesn’t seemed to care and not paying attention on the bus journey. 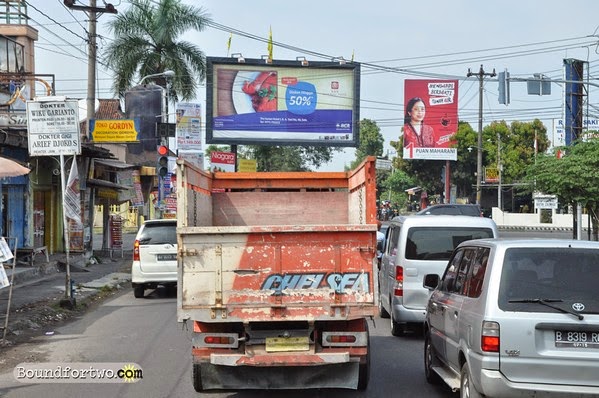 After few minutes of hurdling the dips , we’re now back on a concrete road. Our bus went on full stop at the traffic junction. The surrounding area was a semblance on my hometown Davao in the Philippines. Instantly we felt that sense of belonging and same time home sickness. 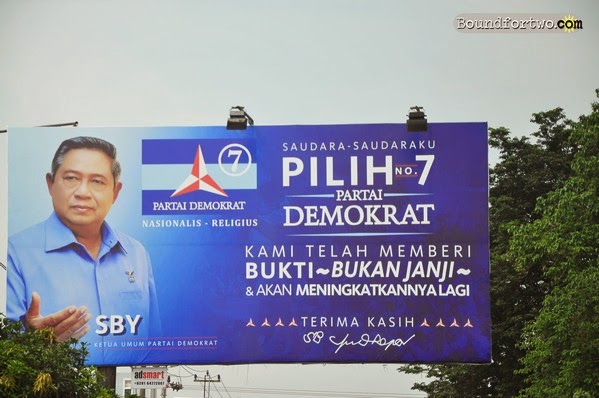 Along the highway we noticed the huge billboards doting the sideways. Most likely a political ad for an incoming election. We saw numerous of different persona and colors which correspond to it’s political party affiliations. The ads were simple, straightforward and just speaks its platform sans the gimmickry tag lines. 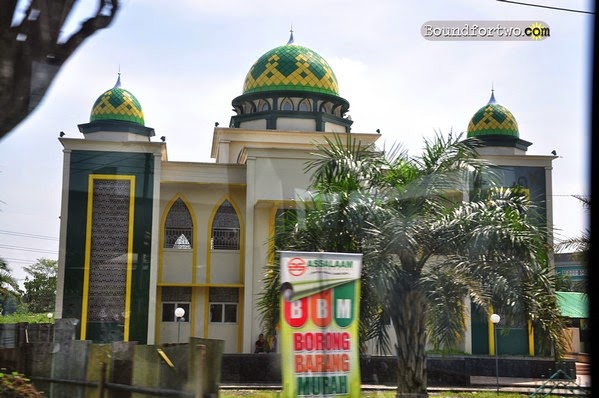 Three onion shaped domes emerged on our left peripheral view. Immediately we conclude it’s a mosque. Then we’d realized the absence of minaret (tower) hold us back to say it’s religious edifice. Whatever it is, the structure was  visually captivating. 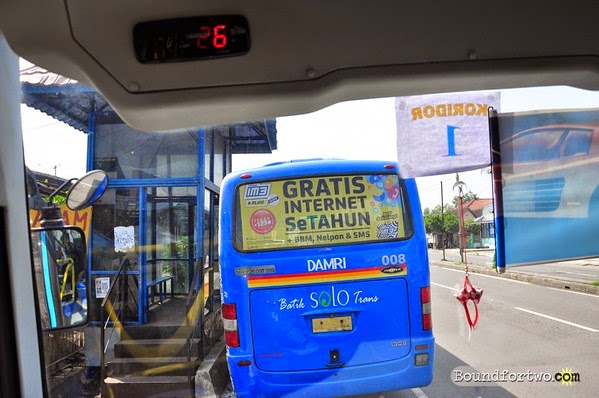 Along our journey, we got amused how this simple looking elevated bus platform served it’s purpose. Now we understand why the entrance of buses is on the middle. It makes the commuters moving in /out faster.  We admired how the locals lined up at the Bus station waited for the passengers to disembark before they’ll get in. All we could do was hope that this Indonesian ingenuity will be emulated by Philippines. 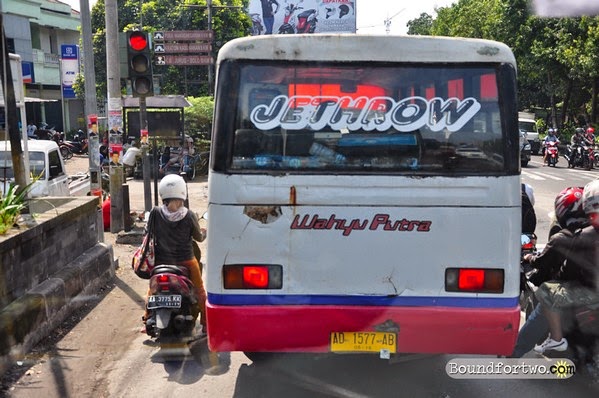 The traffic was getting light to moderate as we got closer to city center. Jalan Slamat Riyadi is like the EDSA of  Solo. Our happy driver reminded us, the next stop is near to Paragon. The only landmark we knew close to our temporary abode. Before we disembark we return a big smile and send him a  warm Terima Kasih.
The 45 minutes journey with Blue Bus of Batik solo Trans gave us a glimpse of Solo, it’s unique culture, laid back vibe  and warm people.
Now we’re on our own, with baffle mind, grumbling stomach and mission to find our hotel.
Public Bus Commuters,
Sky and Summer