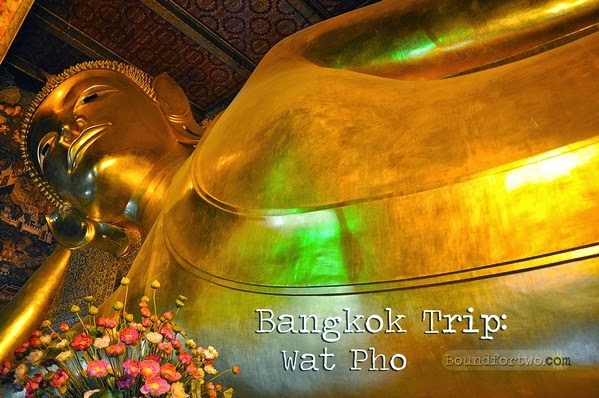 16:35 12/10/2013 Our fascination with reclining Buddha started during our first visit of Thailand in Hat Yai few years back. After that, we haven’t stop invading at least three gigantic reclining Buddhas. Two in Southern Thailand, one in Penang, Malaysia. With an opportunity to visit Bangkok, our enthusiasm relived and plan ahead to stay as close as to Grand Palace and Temple of golden reclining buddha or known as Wat Pho.

After almost being dupe  from uncanny scam artist outside of Grand Palace and experience a heart pumping adrenaline rush of Tuk-Tuk ride. We’re back on the grounds of Wat Pho temple with less than 2 hours to explore. 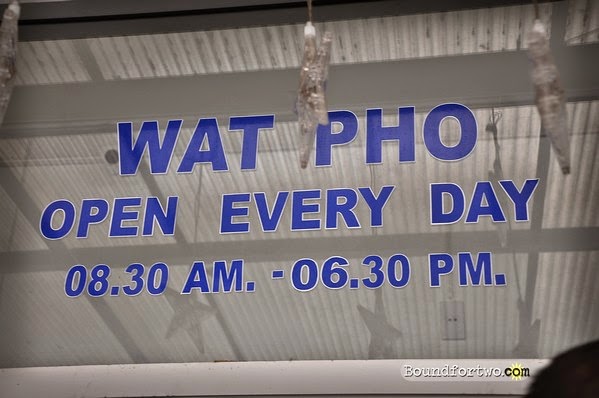 Actually two hours is more than enough to cover this temple and we’d more than enough for the day. So we’ll take it slow this time.
We’d thought it was the best time to visit to cut queue and avoid foot traffic. But we’re wrong, other people thought as the same thing as we had in our mind. 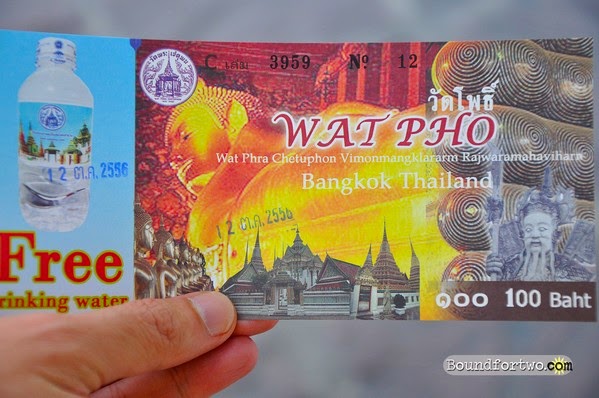 A fee of 100Baht was collected from the entrance which comes with a complimentary bottled mineral water.

We follow  the queue that leads to the main door of the temple which houses the revered golden reclining Buddha. The temple keeper provide each visitors a pouch to put one’s footwear. We believe it’s a customary on any temple, not just to ensure cleanliness on the premise but make oneself connected to the earth, and supreme being. 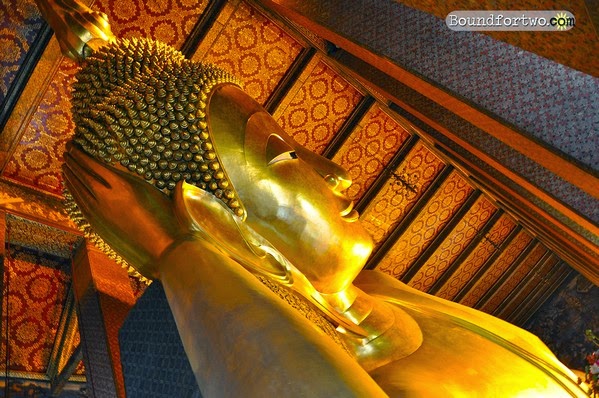 Walking barefoot made us feel relax and perceive solemnity on this place. Speaking of barefoot and relax, this temple was home to one of the earliest Thai massage education.
Just a few steps, the head of mighty golden Buddha showed up without any pretensions. It was captivating and more  remarkable than the photos we saw. 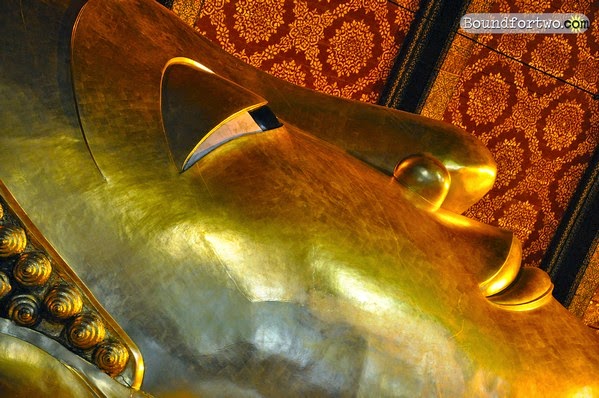 The facial feature of it’s reclining Buddha was very detailed from thin brows, small lips and half shut eyes. We can’t help but compared it to previous temples we visited. It’s intricate element made this golden Buddha one of it’s kind. 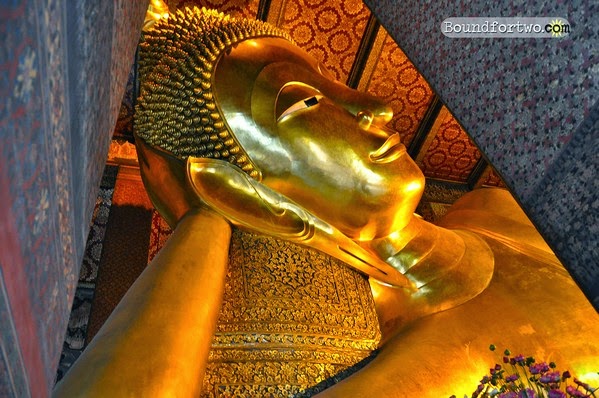 The golden aura gleaming from the mammoth Buddha amplified by highlights illuminates the whole temple. It’s definitely a eureka moment for anyone saw as grandiose as this golden reclining Buddha.
We tried to snap for our photo souvenir but it was more challenging than we expected.  Wish we could have that selfie sticks. 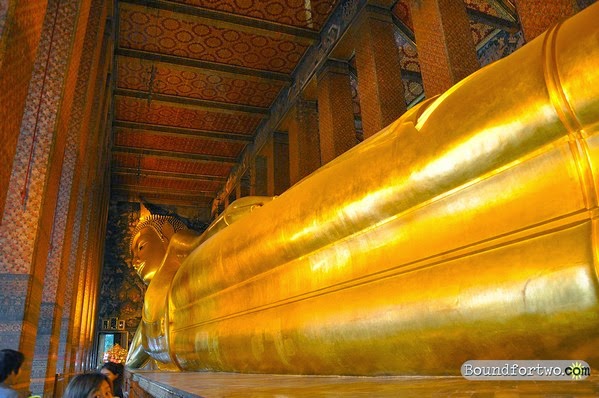 The golden image is about 15 meters high and 43 meter long. Almost same height to the previous one but this Buddha  is 8 meter longer than it’s cousin in Wat Hat Yai Nai. 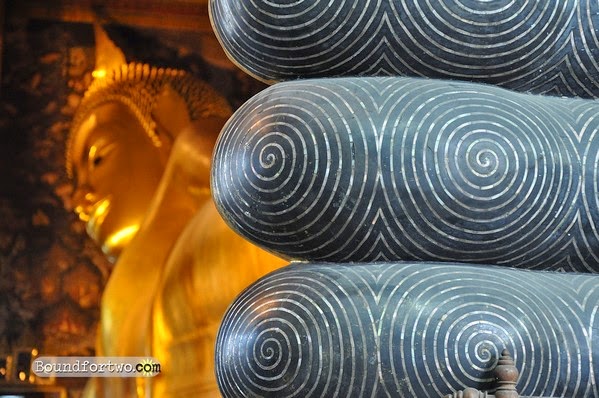 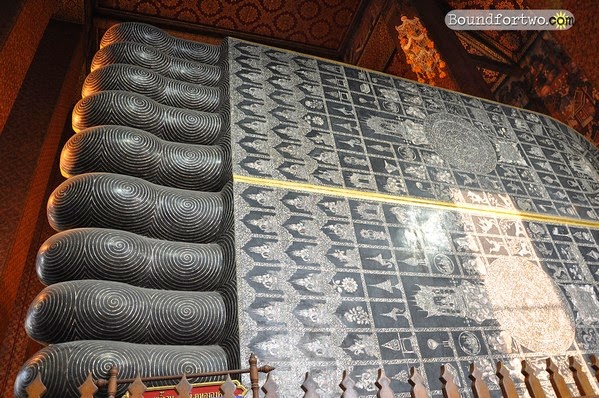 The Buddha Feet was something makes everyone inquisitive. The toes were patterned with swirls and the rest of feet are divided into 108 panels showing the auspicious symbols of Buddha. 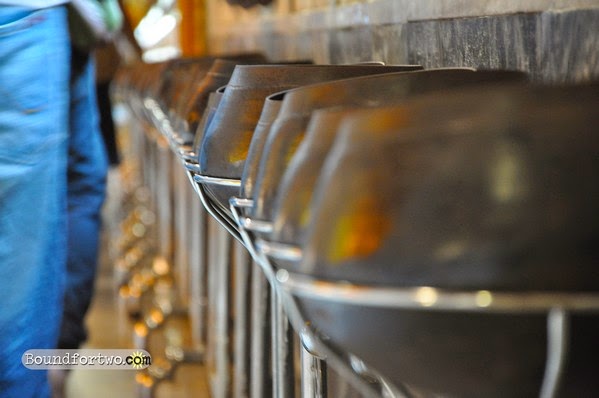 At the back of gigantic image, an array of brass bowls lined up in sequence. We noticed people are dropping coins on each bowls which reminds us of “Sungka”, a triditional Filpino game. 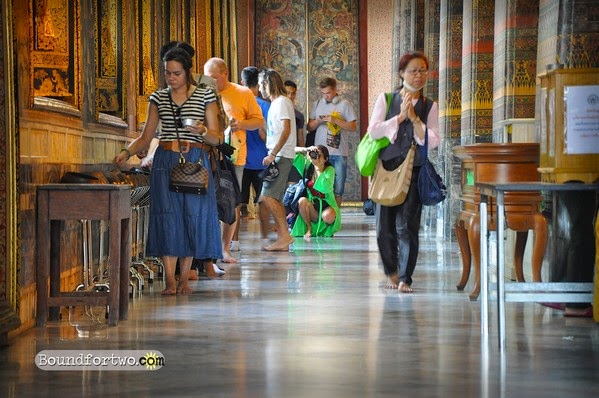 A local Thai briefly explained it’s purpose, somehow it brings good fortune and same time  an aid to the monks. Unfortunately the coins ran out and we’re unable to perform the gesture. Anyway, the experience of being inside was more than enough to brush with good luck.
No matter how many times we saw this same structure in Wat Pho, we still left  in awe. The enormous structure we visited not only wowed us physically but moved us spiritually.
Temple Raiders,
Sky and Summer
Facebook Comments
No comments yet