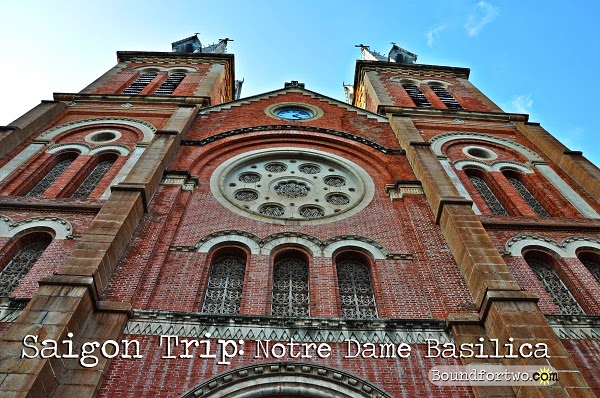 16:05 02/11/2013 We still carried that heavy baggage of emotion while leaving the War Remnants Museum. Our new found local friends picked that up and abruptly changed that doleful moment with their upbeat demeanor. They knew how to smothered that melancholy we felt. After everyone was settled we follow their lead and hitched on their motor bikes. They brought us to the imposing red tinted structure, known  as the Notre Dame Cathedral of Saigon. 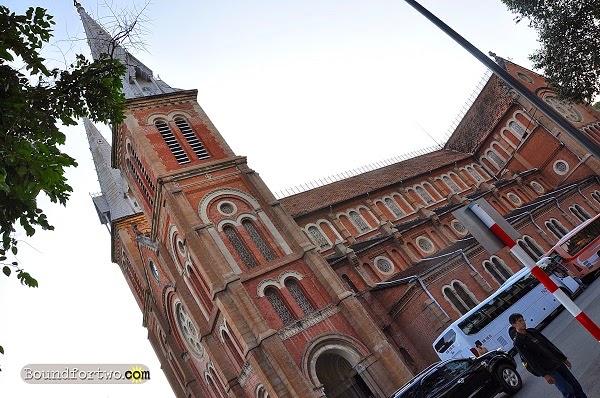 Our eyes were in disbelief of what we actually saw. The pictures seen from friends photo stream and on the web didn’t justify the true beauty of this edifice. It’s awe inspiring and such a remarkable landmark that normally you only see in European cities. Thank to the French colonist who erected this grandiose in Saigon on 1880.
The red colored  facade was due to the red brick which was originally brought from Marseille, France. It’s rustic appearance makes it more authentic. 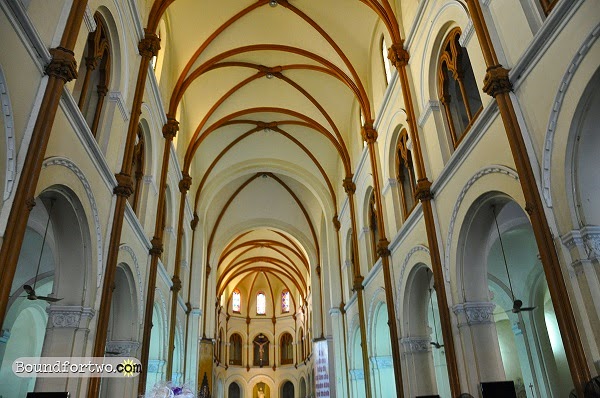 We can’t contain our happiness and hastily went inside to inspect the interiors of the church. The high ceiling and elaborate arches are sight to behold. The well lighted semi dome on the main altar was done artistically. 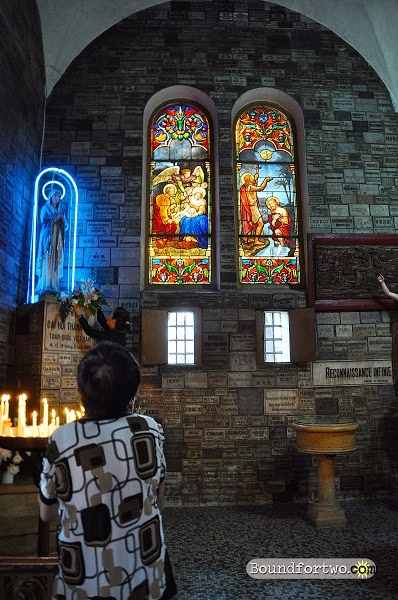 A slight flow of foot traffic coming in and out of the prayer hall. We noticed only few devotees say their prayers seems undisturbed apart from a bunch of tourist flock inside the church. The stained glass of Notre Dame Cathedral was a rare of it’s kind. It looks more detailed and noteworthy. 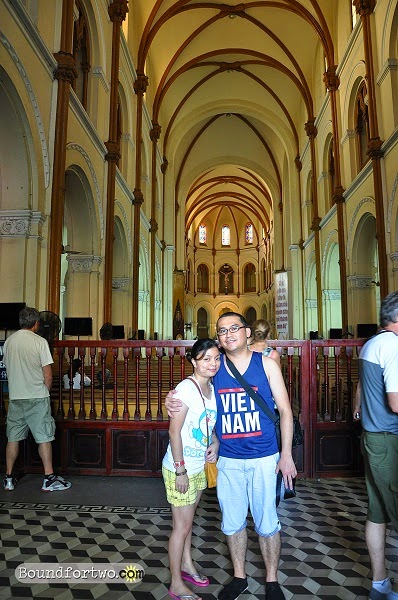 We heard camera clicks and “cheese” from a pack of tourist. Of course we don’t  want to missed this opportunity as well. With the help from our new friends we got a clean shot perfectly angled souvenir photo of this impressive church. Yey! 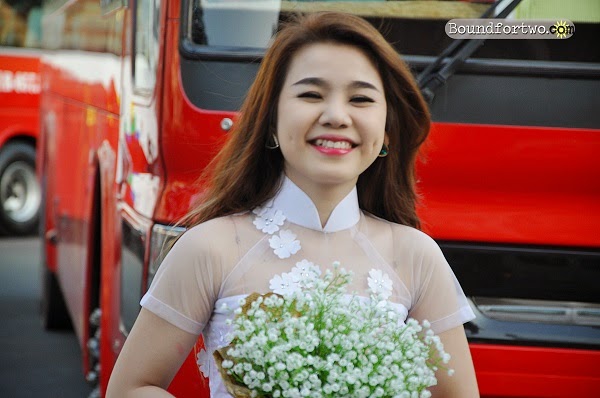 Just as we walked out from the church, a happy young Vietnamese bride strike a pose without contention. Hey, not just one but three or four brides came one after the another. It might be for a pre nup session or actual ceremony itself. But the odds of exchanging vows late afternoon is very unlikely. Otherwise it is customary in Vietnam tradition. 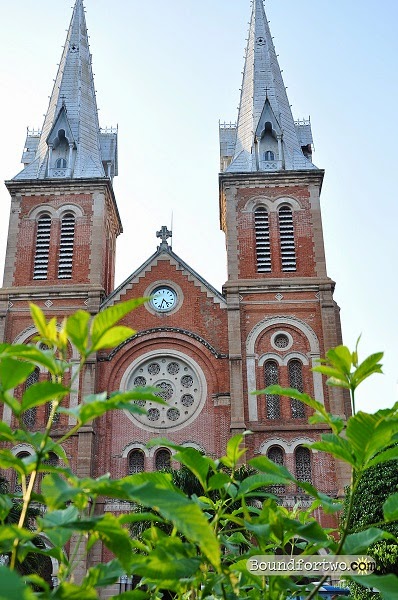 We walked across on the round about and met the other photo snappers. If not mistaken this is same spot where we usually saw photos of Notre Dame with leaves or flowers as it foreground. This angle captures the entirety  of the cathedral and it looks more impressive on this view. The twin spire reveals more of it’s intricate sight and it’s striking presence. 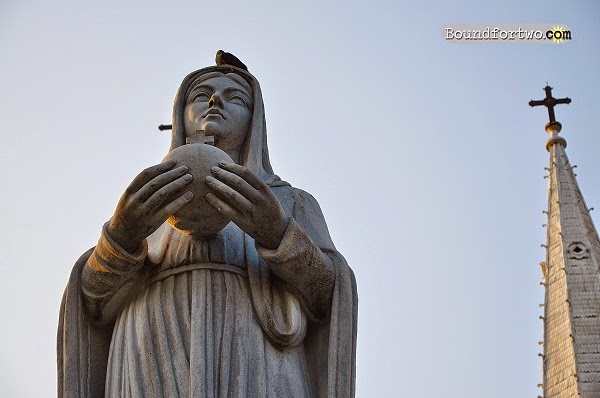 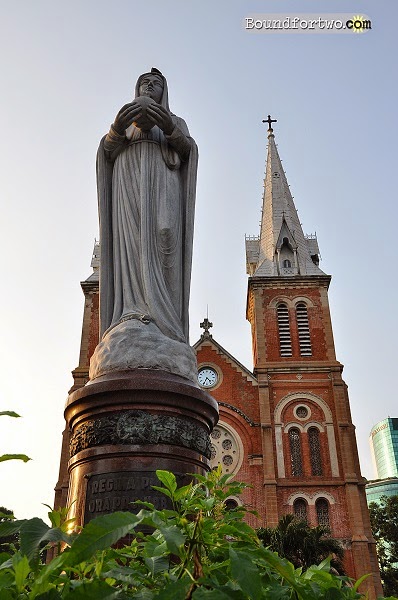 Regina Pacis or a statue of Mama Mary stood on a pedestal at the center of roundabout opposite to the church. A decade ago, it was believed this statue shed tears that attracts thousand of Vietnamese visiting the site. But later on, it was dismissed by the the top clergy of the church. 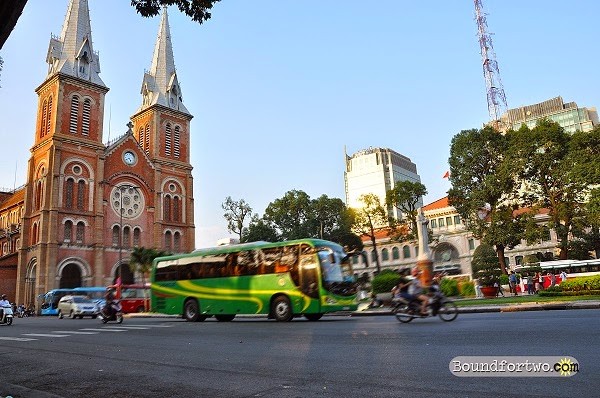 Notre Dame Cathedral in Saigon may not aesthetically look like in Paris but it has it’s own charm and distinct appeal.