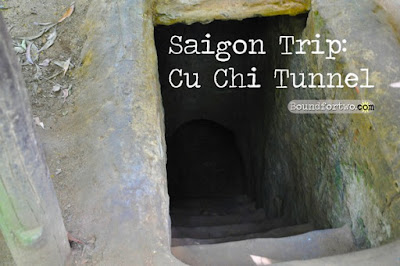 09:30 3/11/2013  Just on time, a lean guy probably on his early twenties approached us for the tour at the hotel’s reception. We bid adieu to Thi the amiable hotel staff of Nguyen Khang Hotel and followed him. We meander the narrow road of Do Quang Dau and tried to avoid counter flows of motorbikes. Yey! We manage to keep our self in one piece upon reaching our tour bus. The effect of that authentic Vietnamese coffee really help. It made our pupil’s dilated,  beat drowsiness and induce more excitement which we all need to start the day.

Our bus roam around in Saigon to pick up other members of the same tour. After completely ticking the roster of participants, our bus went straight to the main road and head to Cu Chi district 28 kilometers away from the City. It is where the famous Vietnam war tunnels are located.

The lean guy move forward near to the driver and introduced him self as Mickey. He is the assigned tour guide for the day. All of us were kept mum when he narrated about brief history of Vietnam War. The folks in front him were so passive and can tell they’re Americans as they laugh in disagreement when Mickey discuss further about atrocity of American during that war. He made us laugh all through out the journey with his half wits and crazy antics. By the way he speaks fluent English.

Before we reach Cu Chi Tunnel, we made a side trip on a handicraft factory. We believe it’s a compulsory stop as most of the tours going to Cu Chi tunnel made a detour here. 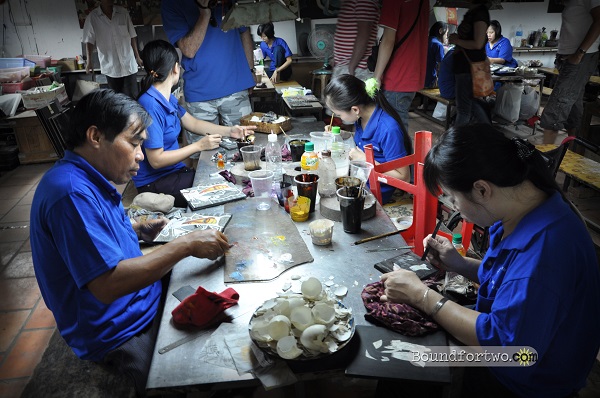 Most of the factory workers are handicapped but it doesn’t affect their productivity and creativity. In fact, most people admired them of their skills and unique artistry. It’s awesome to see the final product of their crafts, superb and export quality. 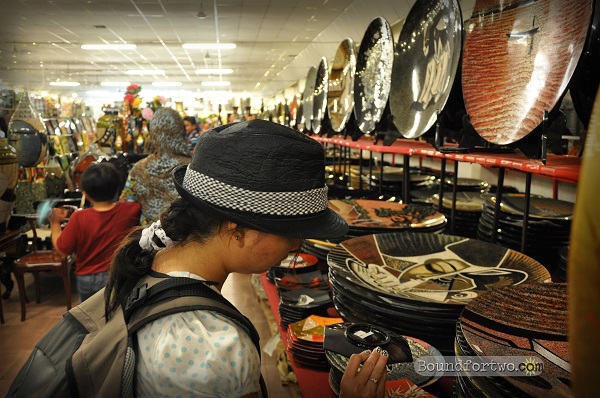 Beside the artisan working area, is the shop were all their crafts are displayed for tourist consumption. We’re just contented of viewing the display as the prices are exorbitant and not friendly for cheapskate like us. 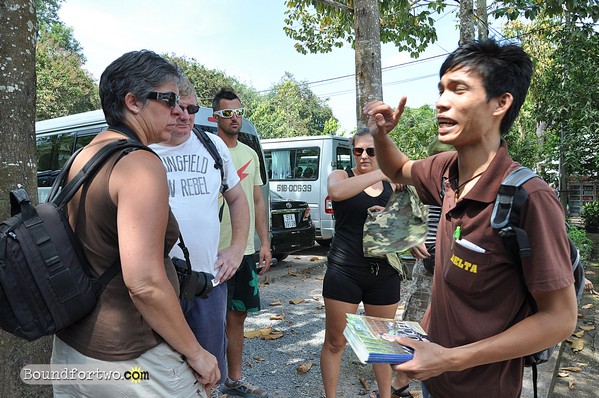 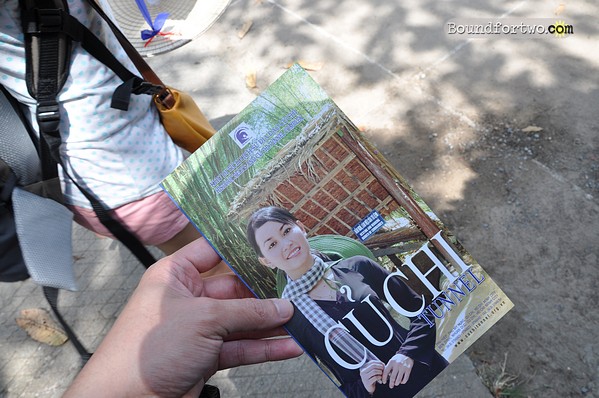 After forty five minutes we left the factory and navigate the a small road that lead us to Cu Chi complex, where 121 km long of tunnels had been preserved into a war memorial park.

Mickey is quite assertive and responsible for ensuring a proper brief, decorum and do’s and dont’s before going inside the complex. He gave us information booklet, and reminded us to follow his lead and keep from being astray. 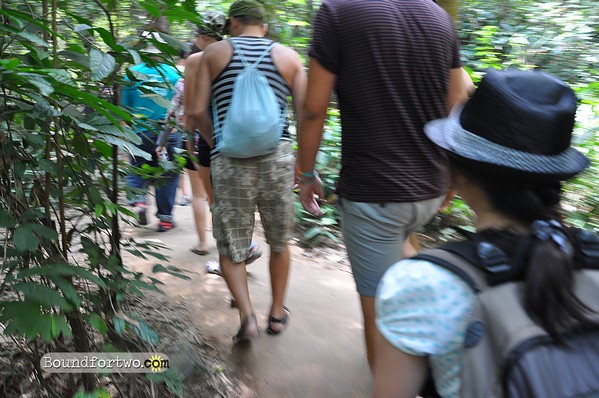 We went inside to the underground passage where every one submit for inspection and must show the tickets before they let us in. Then we follow our group and head to the jungle.

On our first stop, the guide inside the complex showed us  on how the vietcong guerrillas maneuvered themselves to get inside this trap door.  Judging on the size of the hole, it appears to be the same as A4 paper. He challenge everyone to try in, get inside the tunnel crawl and exit on the other side. 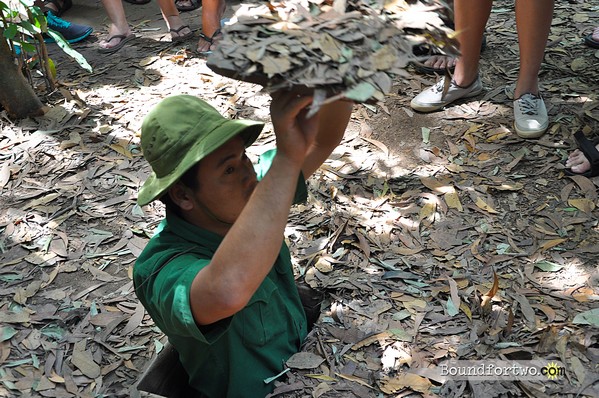 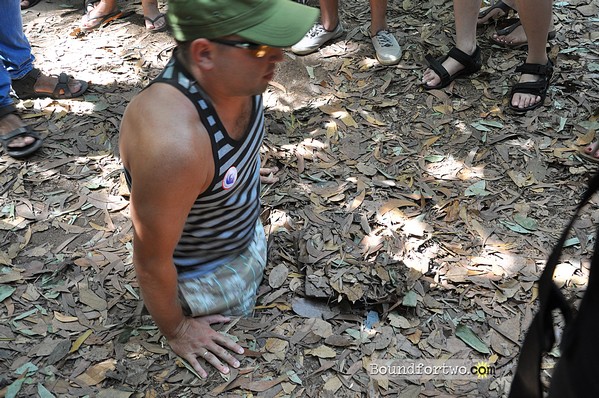 One brave soul (a Comrade) volunteered himself to try. Everyone were astonished on his proclamation. Looking at the photo above, you probably get an idea how it went through.  Yes, he was stuck as his broad shoulders didn’t cooperate. 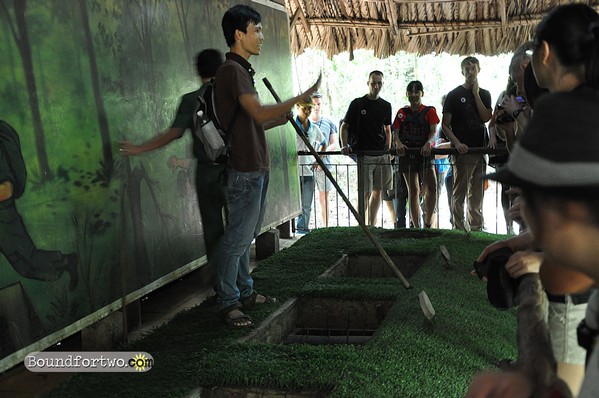 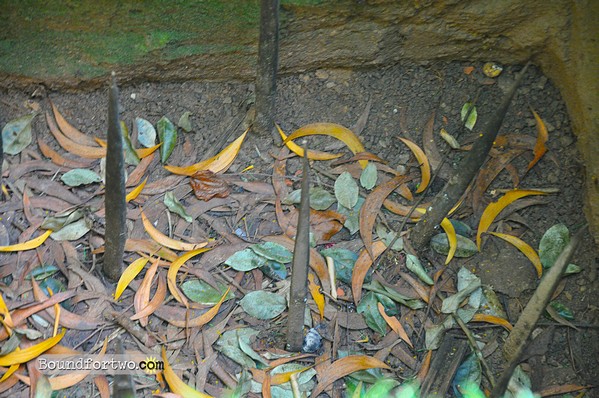 Mickey gathered us to a hut where it displays different kinds of booby trap utilized during the Vietnam war. Bamboo spikes was the most common one since Bamboo trees were relatively abundant around Cu Chi. 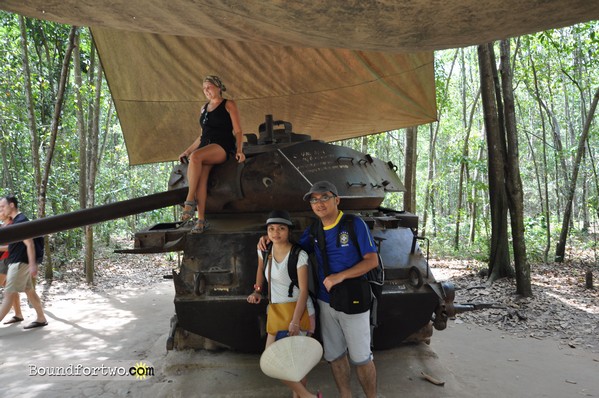 Another interesting display  was the M-41 American tank that lays solemnly within the Cu Chi jungle. Even this mammoth wasn’t no match by the rocket propelled gun used by the vietcongs during the war.

We move to the most anticipated part of our tour, exploring the tunnels. Cu Chi tunnels is approximately 200 kilometers and extended close to the borders of Cambodia. It was primarily used as hiding spot for guerrillas during combat, as well as communication routes, hospital, food and weapon depots and abode for vietcongs.

Going inside was a test of  braving the dark, humid,  with less air to breath. Please watch the video above and see how absolutely challenging it was. We had to duck walk all through out. We realized this ordeal wasn’t meant for us. We felt claustrophobic and haven’t waited to finish and leave on the first exit. We sweat due to exhaustion and badly gasping for air. Now we imagine how difficult for the guerrillas to live there with scarce of food, water and air. 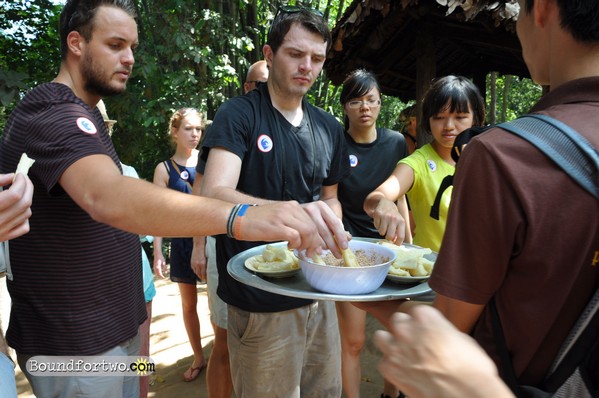 We capped our tunnel exploration by feasting the boiled cassava dipping it on a brown sugar. Each one had its fair share of tasting this treat. This is the staple food of the vietcongs during the war.

There is Firing Range ( for pay) for those who want to try shooting an M16 , AK47 and other firearms. Cafeteria and souvenir shop are available at the end of the tour. 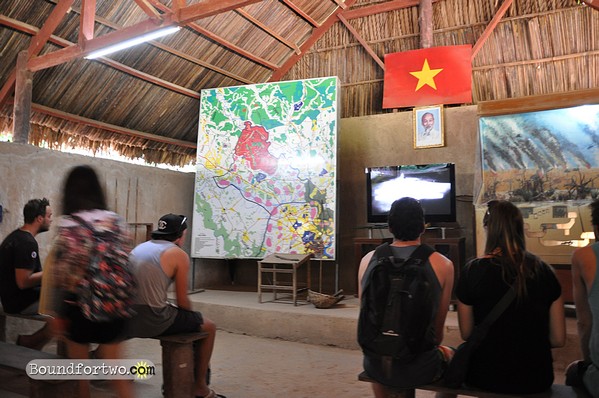 Then we concluded our tour by watching an old propaganda film which showed the side of Vietnam during the war. It was emotionally heavy, tormenting and an eye opener. Thankfully, it’s all about past now, and Vietnamese people had move on.


Best way to visit Cu Chi Tunnel is via an arrange tour. There are a lot of tour companies around Pham Nhu Lao district . We got our package from Delta Tours arrange by Nguyen Khang Hotel.