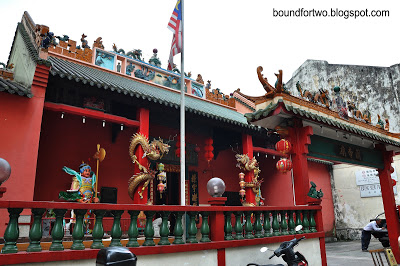 13:05 10/03/2012 We aim to visit the Sri Mahamariamman Temple but we didn’t expect another temple would be opposite to our destination. So we stopover at Kuan Ti Temple and check out the area. The temple was built around 1888 dedicated to Guandi (Guan Gong or Guan Yu) known to the Chinese as God of War and Literature for being a loyal, heroic and righteous character.

We easily identified the temple belonging to Taoist due to its notable symbols( the Dragons and Chi Lins) and intricate carvings on the rooftop. Their signature rooftop carvings, dragons encircling the pillars and design were similar to what we visit in Cebu City, Philippines.

Jalan Petaling ( Chinatown)
Pasar Seni
Kasturi Walk
Sri Mahariamman Temple
As we step inside, we’ve been greeted by two lions, try to intimidate us ( don’t worry they’re stones). They look after the temple to block all the negative spirits. On their behind, were  the Door Gods “Men Shen” who stand near at the door telling us to behold. It seems like we’re waiting for their permission to enter the realm. Though we don’t have any bad or negative thoughts, just want to enter the temple and take photos. We stared at them like a tourist waiting for an immigration officer chopped the passport. The mood change and we noticed a shift of look from interrogating to inviting face. We took that as acknowledgment and quickly went inside. 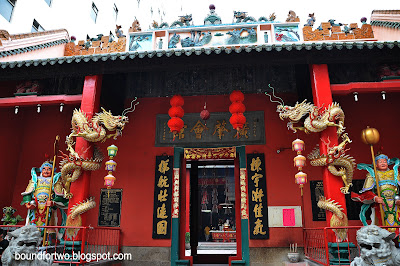 Once inside the temple,you’ll see the main altar of Guan Di ( Wooden statue, face painted with gold color) and his two attendants.


Note:  With Respect to Temple deities, it is generally observed not to take photos of them, so did we.) 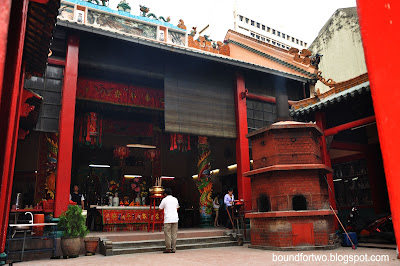 One thing caught our attention  were these woodlike spiral shape hanging on the ceiling.


He didn’t know what it is until I told him  it’s a different kind of incense which is  use to gain the attention of gods. – Summer

“I was amazed to look these lit coil incense ,  it’s unfamiliar scent is very relaxing which surely associate my olfactory bulb.” – Sky 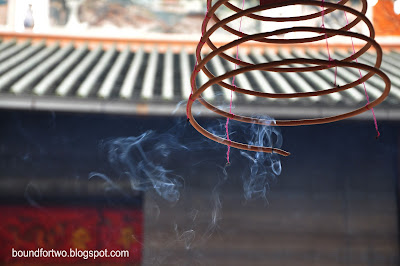 We left the Taoist temple with a big smile and crossed  the opposite road towards the Sri Mahariamman. This will be another temple adventure. See it here