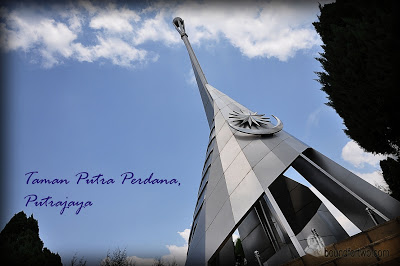 13:00 26/5/2012 The day that I gain liberty and spontaneity. Well, I didn’t ask for it so happened that Summer is engage with a Saturday work commitment. I was bit happy and excited as I could carry out my solo random Photowalk and meander like a lost kid. But the other half of me is worried since I don’t have a buddy to rely on when an unwanted event turns up or help me to figure out when got lost. I felt reluctant at first but give it a nod just to try  what it feels like doing a solo trip. Now I’m ready to go but I’m stuck with a dilemma. Where to go? I let my slapdash side of me taking over. I embark on an E1 bus which I know will head to Putrajaya (how to go here). During the 40 minutes bus ride, I recalled a beautiful garden in the Putrajaya roundabout during our last time visit in Taman Botani Precinct 1 Putrajaya. 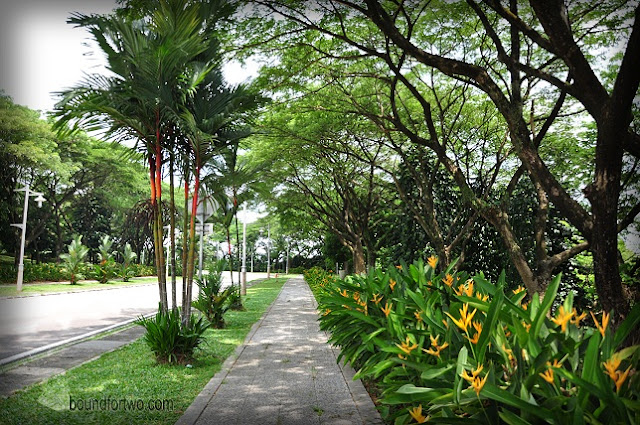 I followed the same route and alight on the same bus station but went towards the opposite road. Without any map on hand, I go along where the road can lead me to. I  followed a path of Heliconias on the sideways as a starter. It was like walking on pavement in the middle of a rainforest. These flowering plants are commonly be seen as landscape ornaments in Malaysia. I stopped by for a moment, squat on the side walk to picture these bright tropical flowers.

The radiant yellow-orange flower gives a good contrast to it’s green banana like leaves. Aside from the false bird-of-paradise, I saw a different  kind of variety.

An orange and red hue appeared on a bunch of common ones. Its black pigment  makes it more unique from the rest. I think I spend more than half an hour snapping photos with  Heliconias and  move out before I’ll attract some attention. I follow the curve road which leads me to Taman Putra Perdana. Maybe my stroke of luck brought me here. I was looking for this garden during our previous Traipsing in Putrajaya but were unable to find it. 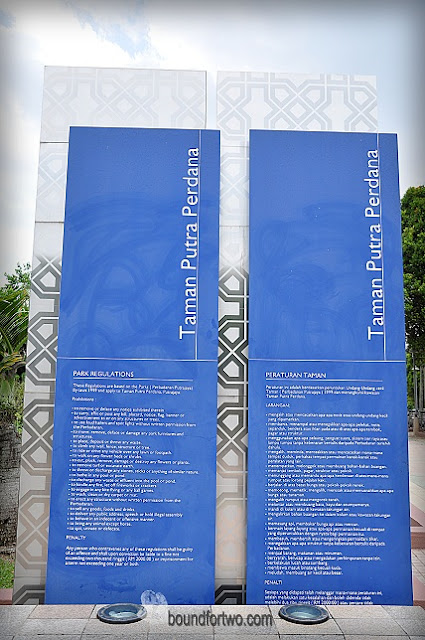 Taman Putra Perdana or Putra Perdana Park is near to Shangri-la Hotel Putrajaya and located in Precinct 1 roundabout. This is one of the parks in  Putrajaya which is open to the public, so admission is free. Mostly people will visit here to unwind, escaping the hustle and bustle of KL. 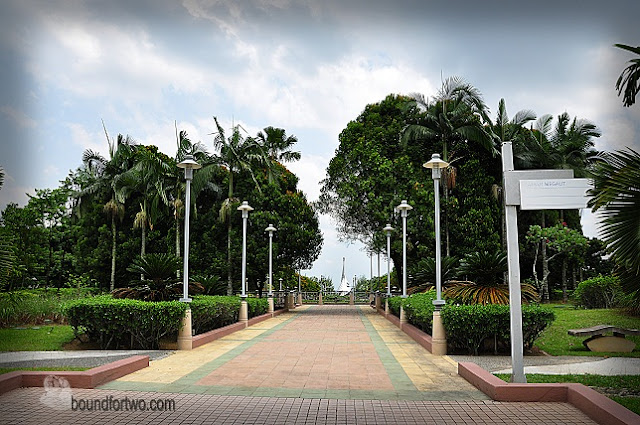 Well, I came here not really to unwind but to wander around while doing my solo photo ops. I can’t help but notice a conical shape monument at the distance which makes me move promptly. Then a sudden, I quickly halted upon gazing to a gigantic grasshopper. The biggest I had ever seen in my life. If not mistaken it’s 4-5 inches in length with yellow-brownish colour. Seems, this fellow just have a quick stop over on the tile pavement before hopping aimlessly. We bid farewell and followed each path. 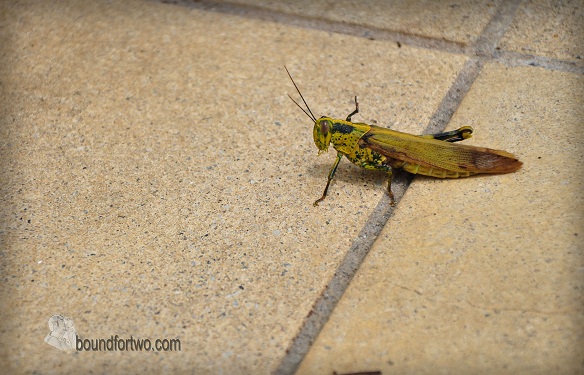 Along the way, a familiar summer scent lingers in the air. I knew it was the flowers.Everywhere I look at were all flowers. Most of them are blooming in full colours that make the insects busy. 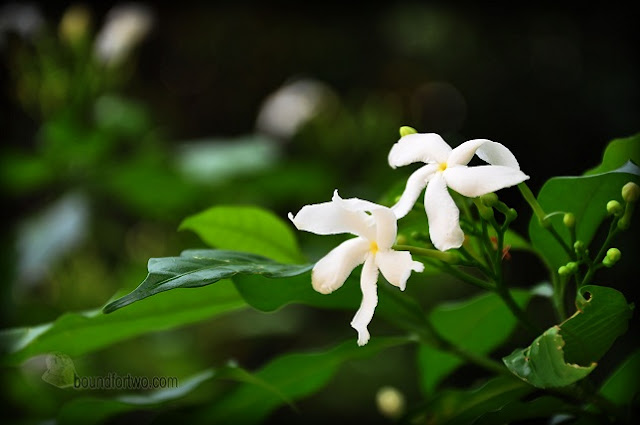 I recognize some of them during our previous nature trip. Just like the spider lily which is a very common flowering plant in Malaysia. 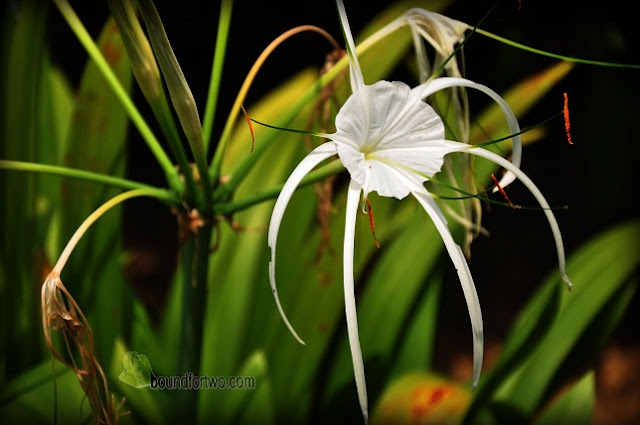 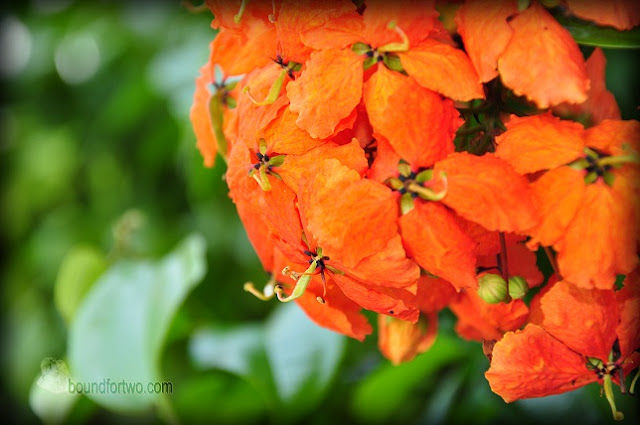 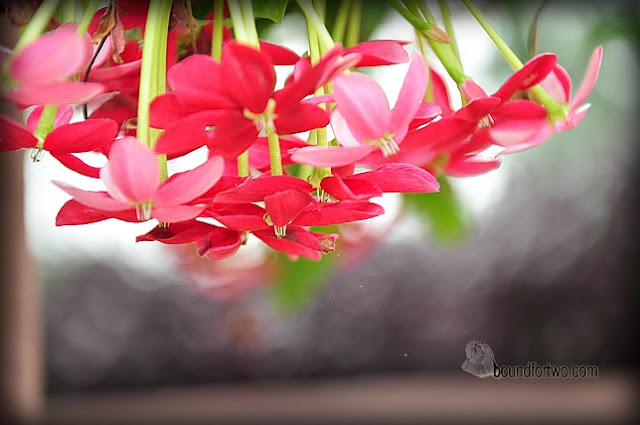 I was kinda surprised seeing Santan in Malaysian soil. I just come to know there also known as Ixora. I had good memories with these flowers. During childhood, out of curiosity, I sip the nectar of its petals and found out the taste is sweet. 🙂 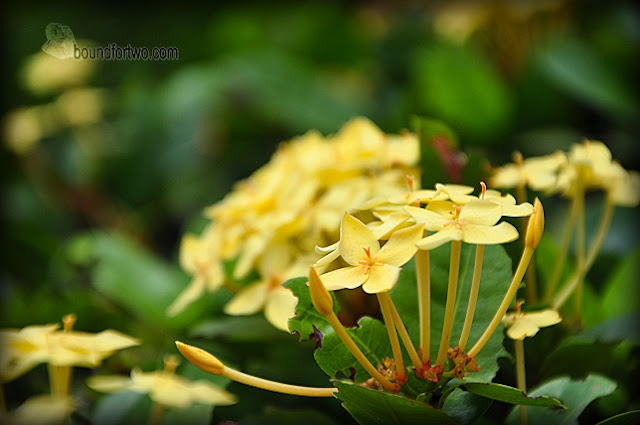 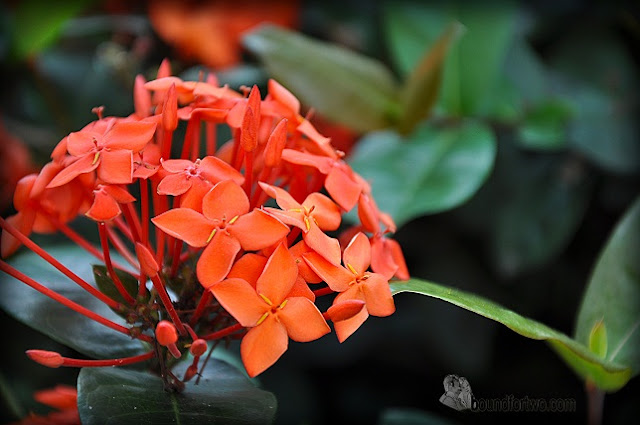 An array of golden yellow flowers hanging from a tree catches my attention.  I was lucky enough to witness the blooming of Golden Shower tree as it only happens during late spring. Beautiful right? 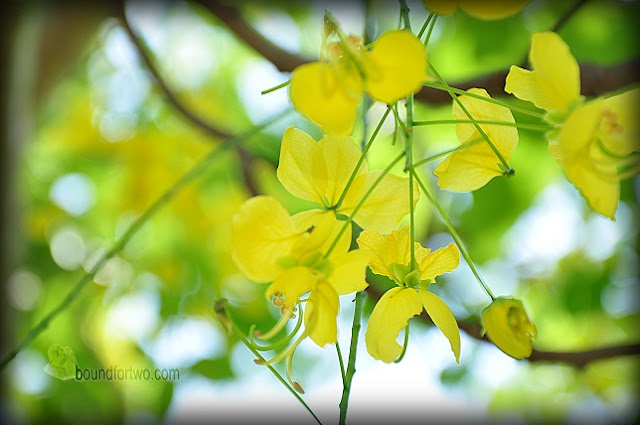 As I go nearer to that conical shape monument. I had a glimpse of Sun and Moon etched on the wall,  a distinct Malaysian symbol.  Upon reaching the place, I passed some several fountains with an intricately designed lamp post and wakaf (shelters). 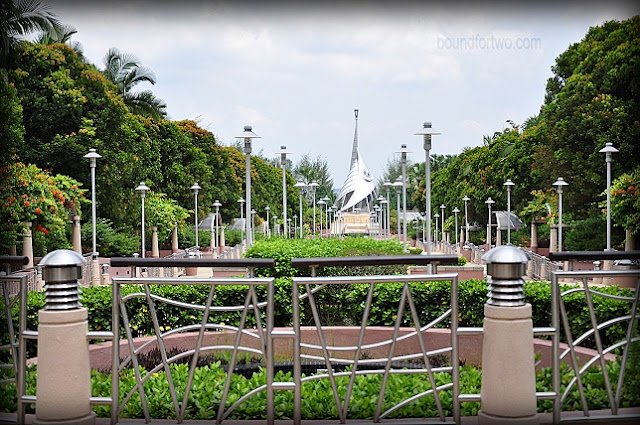 When I reached  the monument, I look back the path that I took. The lamp post is perfectly aligned to each other while the 11 fountains are visible from the viewpoint. For sure this will be a good sight when evening comes. 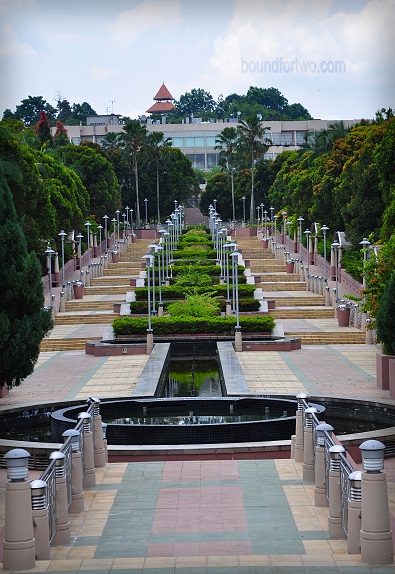 Then I turn 180 degrees and face the 78 meters pyramid-conical Mercu Tanda monument which astounded me. Dub as  the proud symbol of Putrajaya. 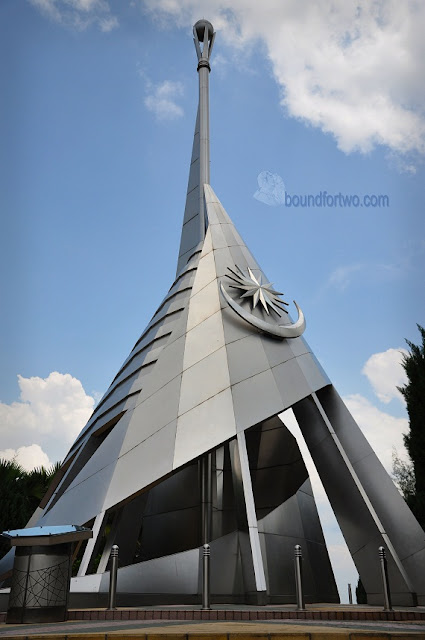 This monument had been inaugurated way back 29th of August 1995 during the time of Tun Dr. Mahathir Mohamad as stated on the plaque. 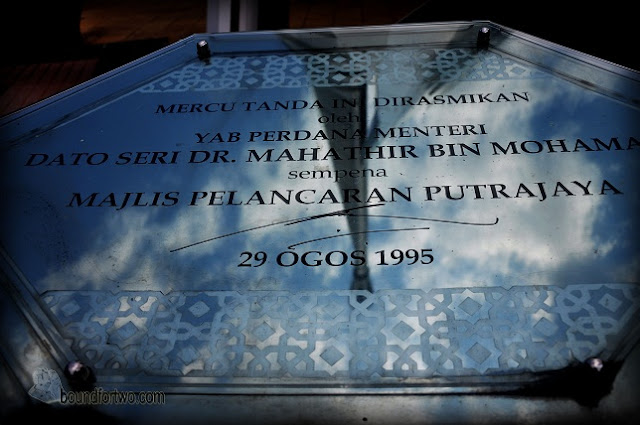 It is said this monument was the first structure erected in Putrajaya which makes it more historical. This structure also holds a time capsule contains some official documents  on the history and development of Putrajaya. 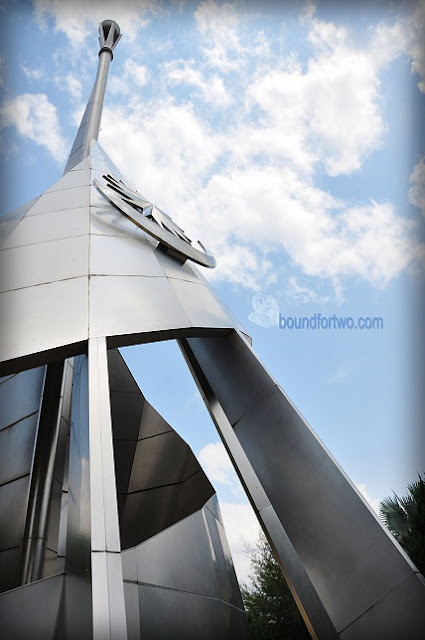 I concluded my rambling with a panoramic view of Putrajaya’s famous landmarks, the Wawasan Bridge, Putra Perdana Office and Putra Mosque from Taman Putra Perdana viewpoint. 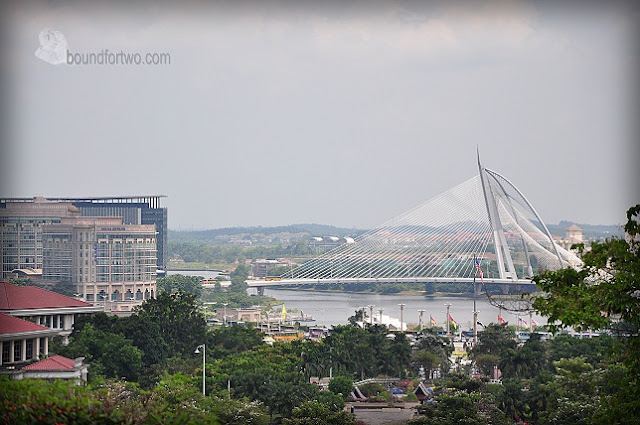 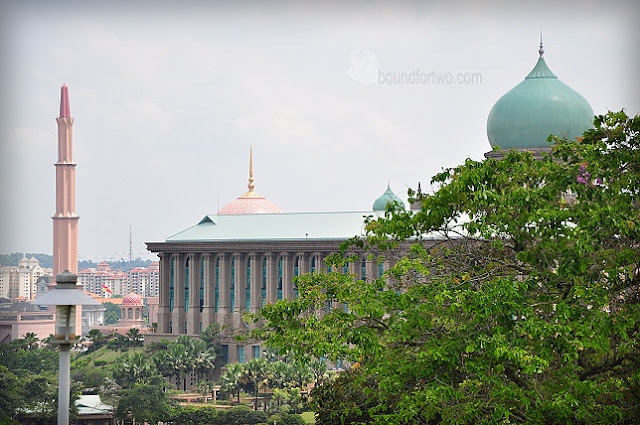 But somehow my itchy feet won’t stop yet and continued walking until I reached  Monumen Alaf Baru. It’s 4kms away from Taman Putra Perdana which I’ll share how I get there on the succeeding entries.