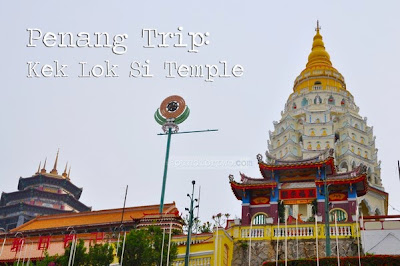 17:30 06/07/2013  Cold wind blows brushed off our dermis. Which amplified the chills coming after a quick shower affair in our temporary abode. Abrupt shivers tells something wasn’t right. We ran to the terrace, look up into the sky. Damn, a  dark grey clouds began to form. A clear sign of  an impending rain. Then the battle of to go or not go happened. We had been on this kind of situation lot of times. But we’re headstrong enough not to cancel it.  It will never be an option. Since we just traveled 200 miles up north just to see the temple of Supreme Bliss ( Kek Lok Si Temple) in Bukit Air Hitam Penang. We pursued,  fingers-crossed and  leaning on our “Bahala na” (leave it up to God) mode.

The weather in Penang Island was totally unpredictable. It was dark and gloomy when we set off from Jetty Bus Terminal. Drizzling ten minutes after,  sun rays shone during the middle of journey, droplets falling from the sky two or three miles away from the place.  Then a clear sky view upon alighting  at Jalan Pasar in Bukit Air Hitam. Whoa, change was constant indeed. 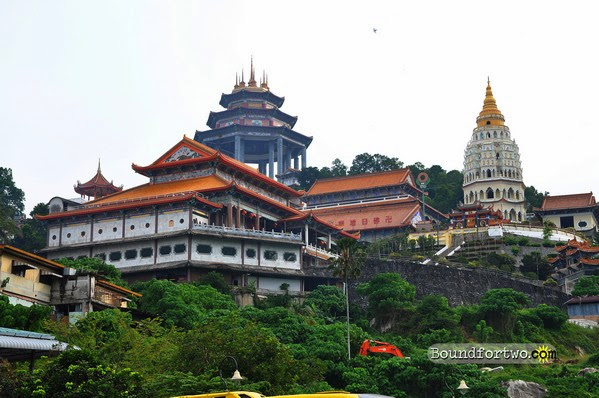 The crazy weather failed to deter our alacrity visiting the multi-tiered roofs and the astounding pagoda of 10,000 Buddhas that welcomed us from afar. Streams of excitement flows in and next thing we knew was. We’re into the alley of shops and stall that sells random trinkets, clothes and fancy stuffs. It’s so hard to resist but we manage to climb all the way up to temple without damaging our pockets. 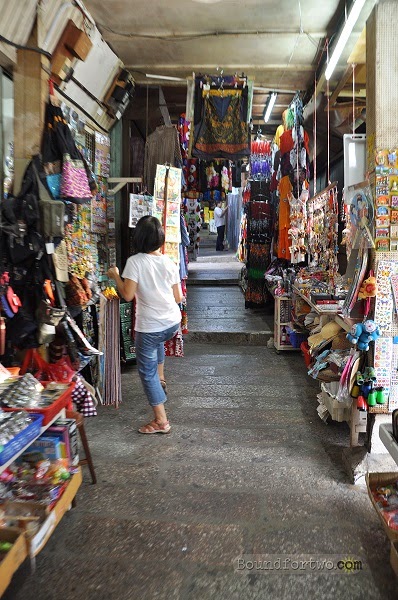 The trail that leads to Kek Lok Si temple was easy to follow,  thanks to this sign board(picture shown below). Getting lost would be unlikely to happen. 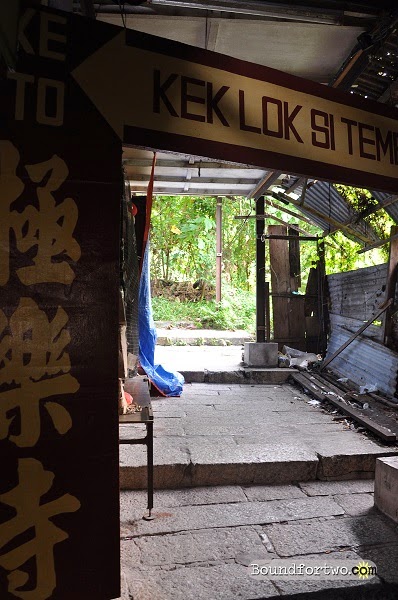 The first attraction we encountered was  oriental style gazebo surrounded by a  pond. An old lady from behind whispered it’s the Liberation Pond. She offered a water spinach or known as “Kangkong” in our country. In which we politely asked, what are these for? 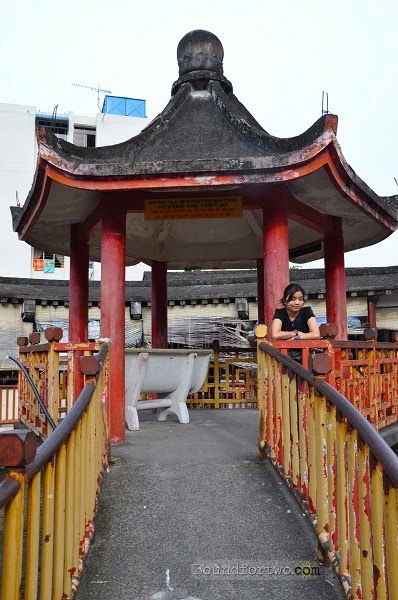 She pointed out for the turtles,  that were struggling around the greenish pond. The  snake head like fellows keeps pushing their way up from their carapace to get tourist attention waiting to be fed. 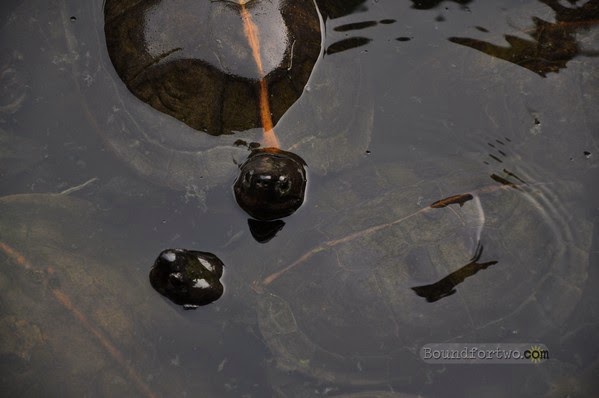 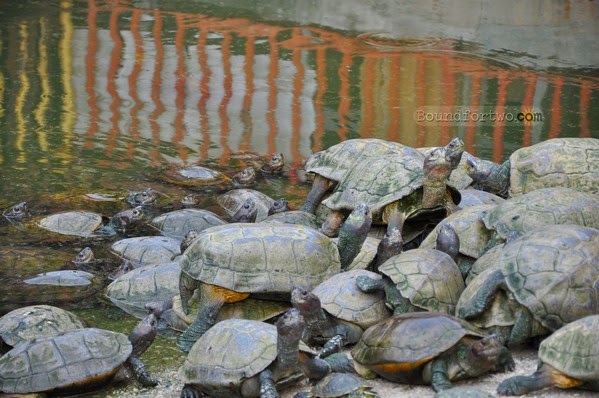 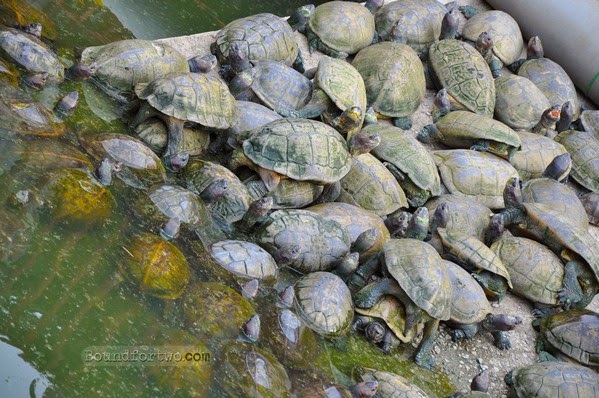 The small  pond was overcrowded by turtles, and looking at them made us felt awry. Contemplating the word Liberation was totally contradicting. Or we might have a different views on it. 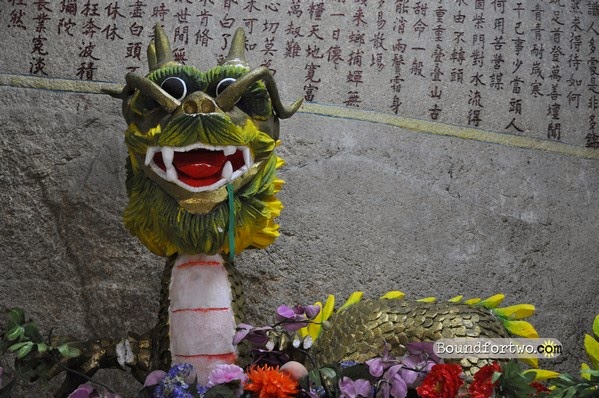 We didn’t waste our time sympathizing the turtles tussle and continued from walking.  We passed under the main prayer hall and watch over those Chinese poem inscribed on the rock. 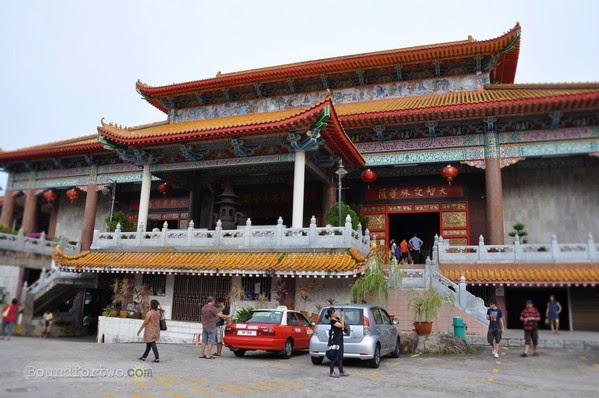 We heard from other visitors,  the temple will be closing at any moment. Checking the  clock, it’s 10 minutes prior to 6PM. No choice, we only have 600 seconds to check the entire complex. 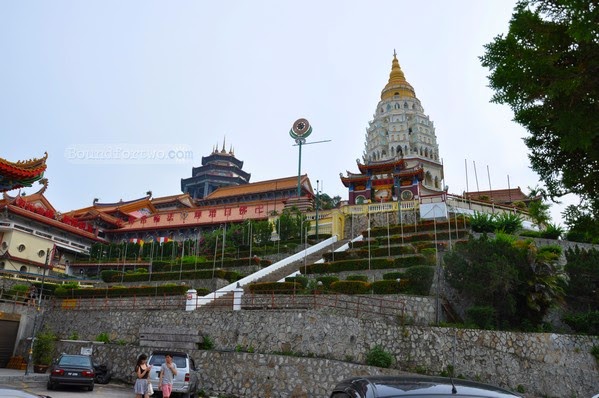 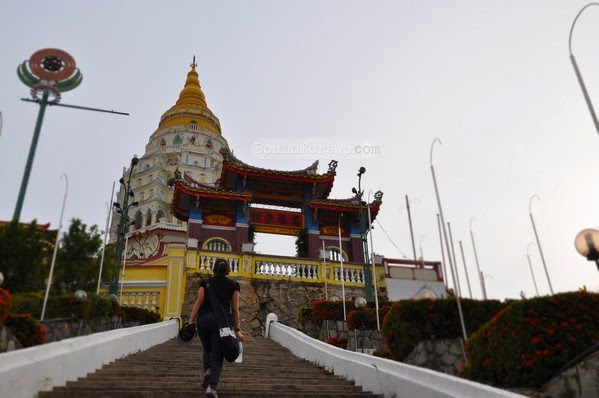 We climbed up towards pagoda,  turned 180 degrees and rewarded with beautiful landscape of Penang. 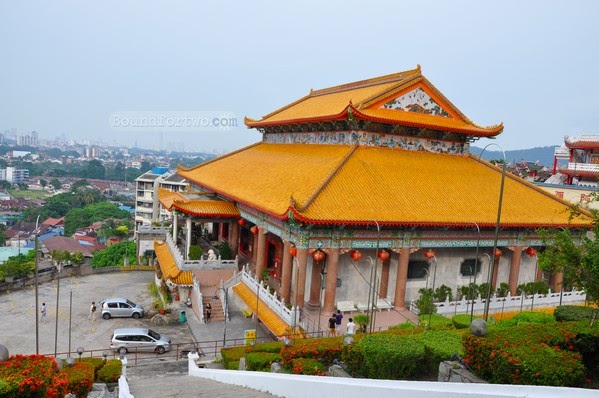 The terracotta roof tiles with it’s intricate design of the prayer hall was architecturally captivating. We haven’t tried entering the sacred place, since it’s about to close and only whose praying were allowed to go inside. 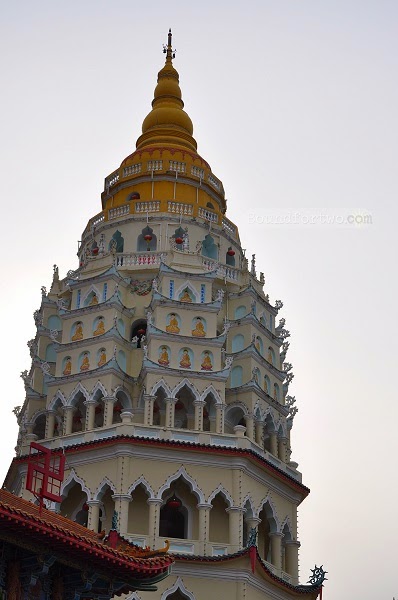 The most imposing structure of Kek Lok Si temple, The 7 tiered Pagoda that houses 10,000 of Buddhas. An overwhelming number of Bronze and Alabaster made of Buddhas that we haven’t seen closely. As we’re too late for the visiting hours. 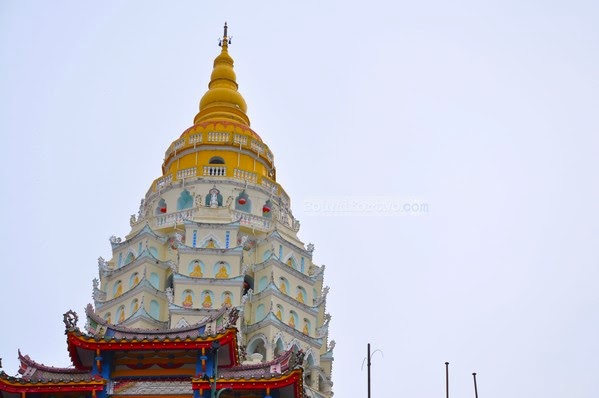 The main Pagoda is a fusion of Thai architecture from it’s  tiers  while the conical shape on top was patterned to Burmese. This striking pagoda was laid  by the Thai Monarch,  King Rama VI during the 1930’s. 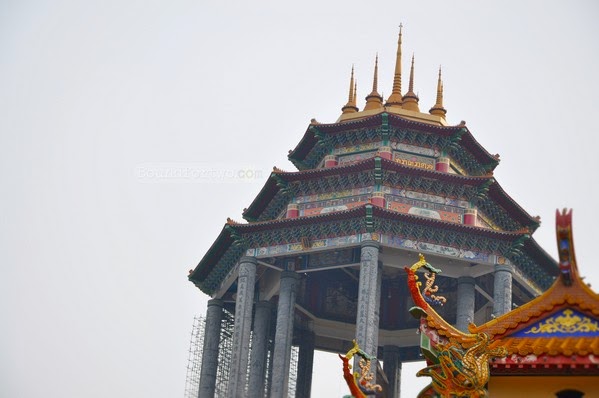 Another impressive Buddhist religious shrine not far from the tiered Pagoda is the Goddess of Mercy Pavilion. It houses the 82.7 Meters tall statue of Guan Yin, Goddess of Mercy. Again, since we arrived a bit late, we’re unable to get close to this massive ornate structure. 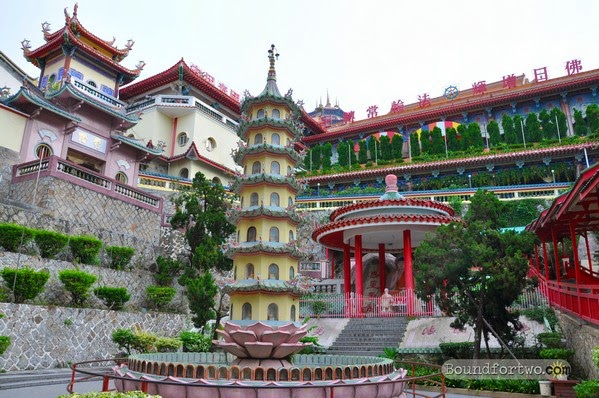 Aside from the spectacular pagodas and pavilion at Kek Lok Si, a  beautiful garden was also in place for meditation and to relax. 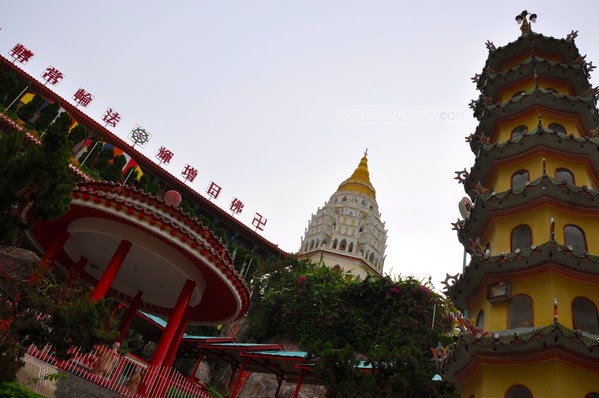 Only few people roam around the beautiful garden, and feels like we owned it. Not until a last group of visitors come by and spoiled our “us” moments. 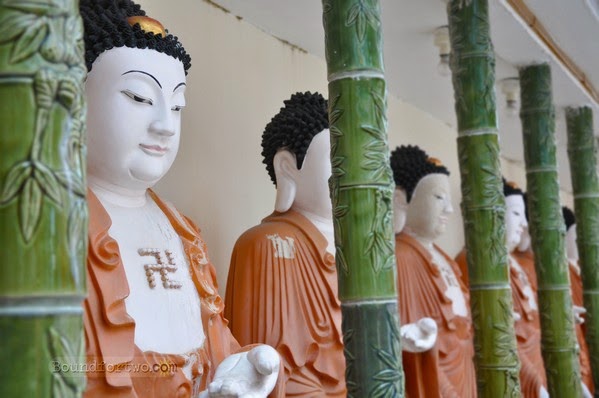 Following the garden path, we discovered a prayer hall which surrounded by different type of flowers and dozen life sizes Buddha statues. Gasping some fresh air while enjoying a great view Bukit Air Hitam was the last thing we did in the temple complex. We bid farewell  just before it closes and followed the serpentine road  leading to the foot hills of Kek Lok Si.
Tip: Best time to  visit the temple is during morning till early afternoon so can enjoy roaming around the complex. It opens everyday from 9AM till 6PM. Admission is Free.
Temple Raiders,