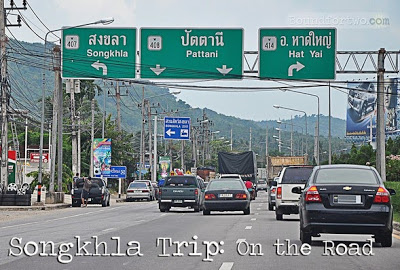 10:52 01/09/2012 “Live, travel, adventure, bless, and don’t be sorry.” Few words that smash our cerebrum before reading that famous book, On the Road by Jack Kerouac. These lines inundate our subtle minds from the last spontaneous road trip happened a year ago in Songkhla Thailand. It was one of a helluva road trip experience, that  captures a spectrum of  emotions that made us define what a real adventure is.

Few minutes before the epic journey

A man wearing a Purple Silk Polo Shirt summoned in front of the red themed hotel 10 minutes prior to departure time.  We didn’t notice him from afar not until we recognize that contagious smile, it was our chauffeur. A lift off  hand and chuckle was enough to respond his effort. The driver whom shall we call Mr. B was very pleasant, punctual and knows what business means. He waves his hand, a gesture to come over so we can start moving. Mr. B roars the engine after handing over some kind of Lonely Planet Book type of a guide. We caught by surprise, as this was unexpected of him.  It was all written in Thai script, and could not decipher at all. Except for the pictures that made it more helpful to comprehend. He mentions a lot places of interest from the travel book guide, that renders us speechless. Given a speck of time, pretty sure it wouldn’t be enough to cover it. He let us choose what to visit while he figured out a  route plan, for our travel convenience. 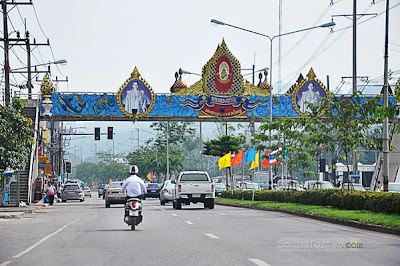 After several left and right turns,  we notice an  image of a man,  somewhat like of a dignified person. “He is our beloved King Rama IX, Bhumibol Adulyadej”, Mr. B said.  Looking at his image on almost every corner on the road and  public spaces translated how Thai people highly revered  their King. When we asked Mr. B  he didn’t give many details and the only word we captured from his utterance was “Our King is very good”. Enriching to know how people had so much respect, affection, and loyalty to their monarchy. 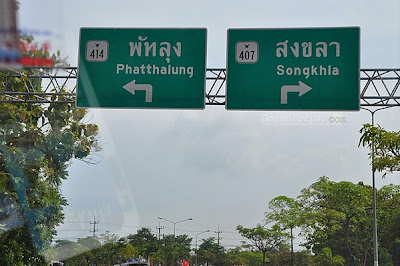 Lorries, motorbikes, and Songthaew that looks like an unevolved jeepney, all waiting for the go signal. When the light turns green, he went straight opposing that  big sign board that instructs motorist to turn right for Songkhla. Before panic mode sets in, Mr. B was kind enough to inform us , that we’ll be heading on the alternate way to Songkhla. In which this route we’ll pass the longest bridge in Thailand. Yey! 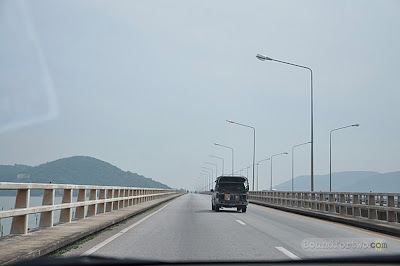 Our worry turns to excitement, and next thing we knew we’re following Tinsulanond Bridge, longest concrete bridge in the country. Passing through the first section of the bridge connecting the coast of Amphoe Muang to Southern coast of Ko Yo was heaven. 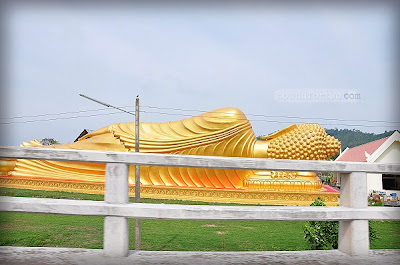 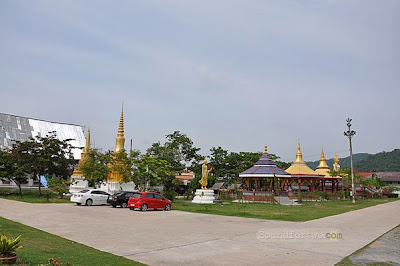 Just a few minutes, a gold gargantuan structure shimmers from a distance. Without saying a word, Mr. B had left turn and brought us to Wat Phranon Laem Pho.  It seems we owns the place as we don’t see any one photo bombing the mammoth reclining buddha. 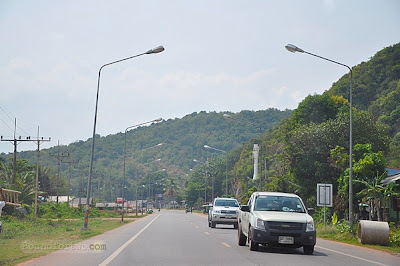 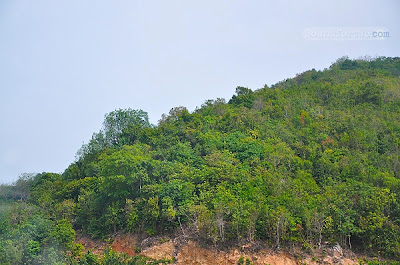 We continue the journey and passed the small town of Ko Yo. An island surrounded by Songkhla Lake. It  reminds us kinda province vibe in the Philippines. Lush vegetation, scenic views, and a warm smile from local people. 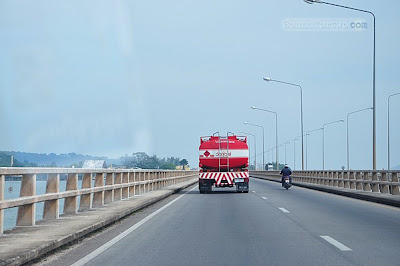 As we move along away from Ko Yo, we follow the second section of Tinsulanond Bridge which connects North shore of Ko Yo to Ban Khao Khiao. We opened the car window and gasp for a fresh air while enjoying a great view of Songkhla Lake. Mr. B shares that those ginormous prawns we saw outside of Lee Gardens Mall wwerefarmed on this lake. 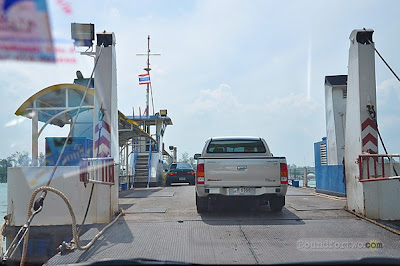 An unexpected reroute and unplanned stop made us an instant wedding gate crasher. That instance was pretty interesting on how we got stuck  which deserves a separate post. After a free meal from a random wedding, we head on to a port and ride on vehicle barge. It was our first time riding a barge on foreign country. It may not be different from what we accustomed in Philippines but the thought of experiencing in other country made that one for the books. 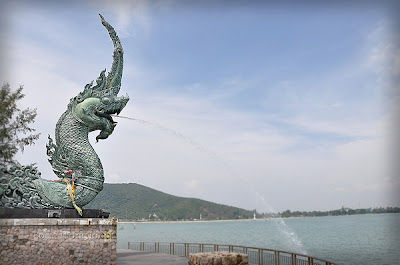 First stop on Songkhla City was at the Nag,  the Serpent statue near Song Thale Park at Laem Son On.  The mythical creature that symbolizes health,  good luck and happiness.  Taking a shower from the Nag  spout brings you eternal beauty (we just made it up) lol. 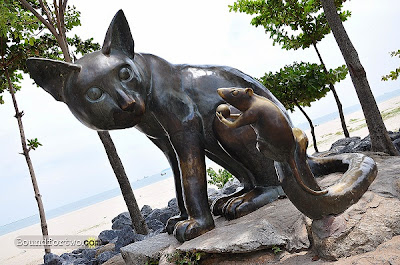 A local folklore about cat and mice were  immortalized by these statues and became a tourist spot on its own. Does it suggest that local people  also love Tom and Jerry? 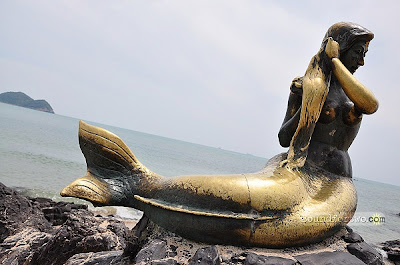 Just a  hundred meters away,  a golden mermaid  sitting on the rocks at Samila Beach welcomed us. Taking a photo with this famous landmark was bit challenging, as hordes of tourist swarm the lovely mermaid. 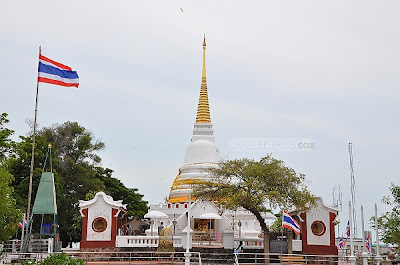 Next place of interest we visit was Tan Kuan Hill. Reachable by  lift, A breath taking  360 degree spectacular view of the whole town of Songkhla and nearby islands. 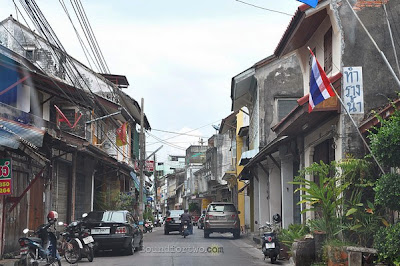 After visiting the notable landmarks in Songkhla City, our guide  toured us to unfamiliar streets of Songkhla. In which we able to see the daily lives of Thai people which we find it more interesting. 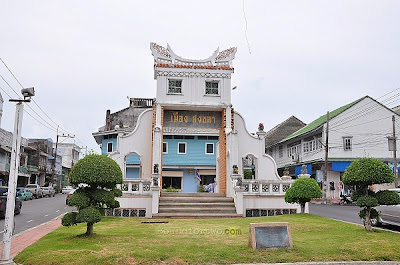 Without any word, Mr. B hit the brake and encourage us to step out and take a snap with this Chinese Arch structure in the middle of the road. We’re kinda clueless on what transpired him for doing that. Little did we know, it’s Songkhla’s City Gate, a significant landmark of the city. A historical treasure that witnessed of what became Songkhla now.
We’re partly tired and lock lip while heading back to Hat Yai. Mr. B played a song that he said, we can all sing along. Surprisingly he knew what music that make us stir, break and loose.
Please be warned, that no animals or chipmunks had been harmed upon making this video. Enjoy!
A year had passed after this road trip but the memory of this epic journey was just like yesterday. Unforgettable, worth remembering and yeah hilarious.
Road Trippers,
Sky and Summer
Facebook Comments
No comments yet