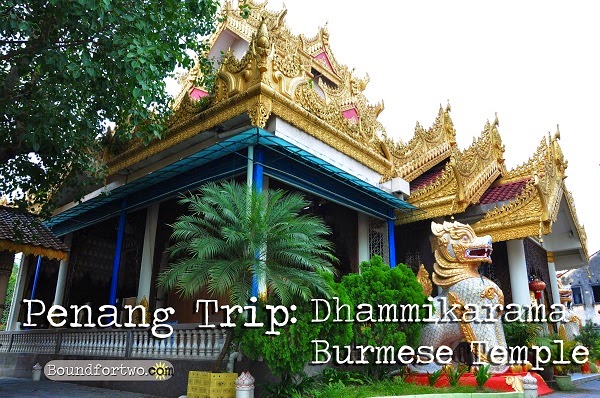 13:15 07/07/2013 After satiating our longing for Char Koay Teow at Lorong Selamat. Our friend Doc Gelo and his son Gabby lead us to Jalan Burma. Joining us to visit  two of the most revered Buddhist temples on the island of Penang. We set foot first in Dhammikarama, the oldest and most visited Buddhist temple.  Built in the 19th century to serve the growing numbers of Burmese immigrants.

An intricate Burmese designed tiered arch painted with red and gold welcomed us. We haven’t seen as detailed, grandiose and sophisticated arch like this in Malaysia. It gives an impression that something is more spectacular beneath that arch. Face up and gazed for a moment until we can’t hold our excitement and enter the temple in a swift pace. 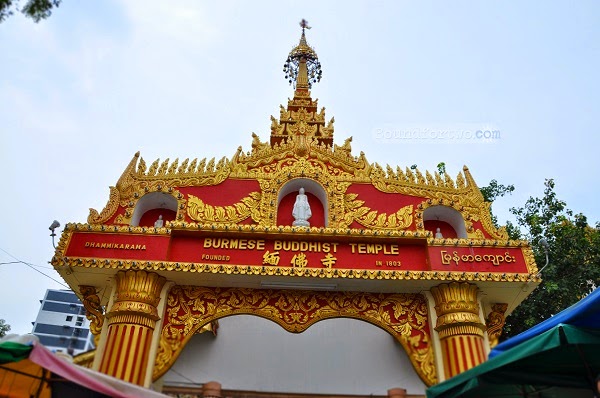 Right off the bat, we fell in love with Dhammikarama temple. We felt like we’d been transported to Myanmar sans the hassle of flying. It was surreal, and we began protruding our eyes to check if we’re dreaming or not.
Upon entering the main temple, we’d been stopped by two huge mythical creature which resembles like of a Lion, known to them as Chinthes . They stood opposite to each other protecting the temple. Since we don’t brought any bad vibes , the Chinthes let us through the hall. 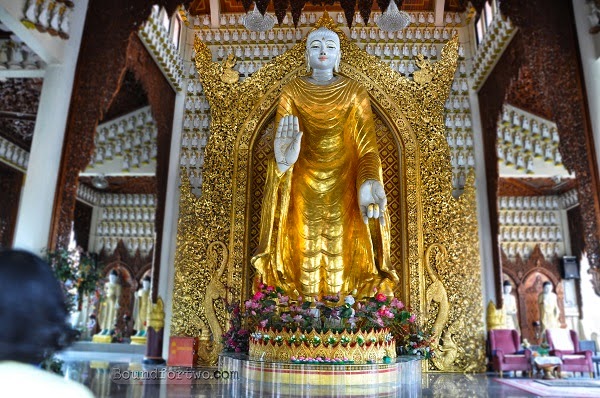 A huge gold clothed image of Buddha on Abhaya Mudra gesture stood on the main shrine hall. With it’s aurous gleaming aura, it captures all the attention whoever enters the temple. It’s calm facial expression and peaceful gesture made every devotees and visitors blessed.
It’s our first time to see an image of Buddha with an ivory colored depiction of head and hands. Contrary to what we usually saw in Malaysia and Thailand temples which were all covered in gold. 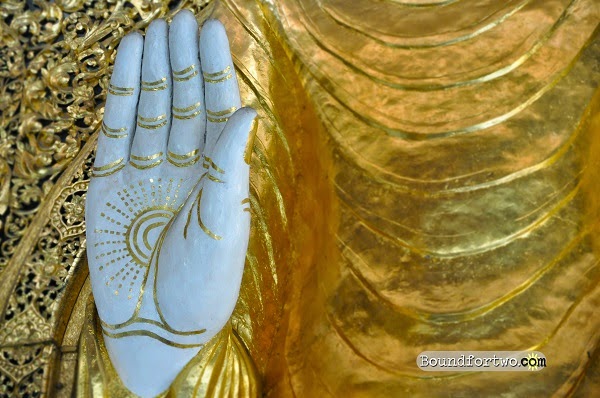 The oversize rendering of hands was also noticeable to emphasize the Abhaya gesture. Abhaya in sanskrit means fearlessness. 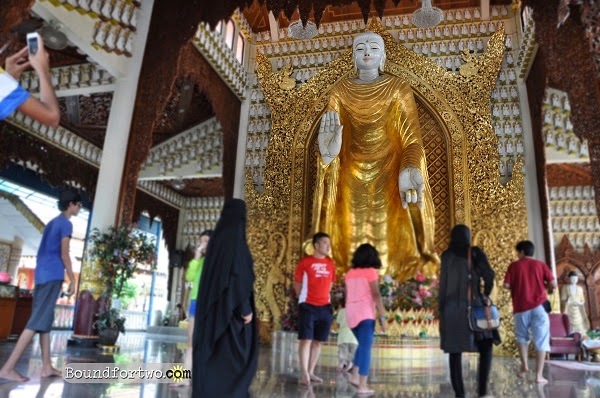 We thought we’re the only ones amazed by its sheer beauty, not until a flock of tourist swarming the temple. Aside from Buddhist, people of different beliefs were also casual visitors of this behemoth standing buddha. 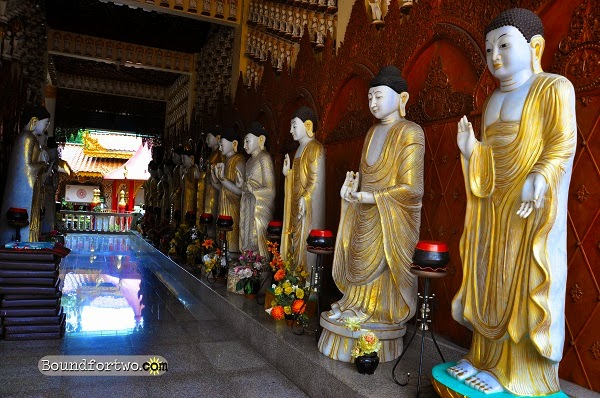 At the rear of big image, were a collection of Buddha and Bodisattvas.  There we saw various forms of rituals and poses depicting different mudras. It’s enlightening to know that an open palm or tweak of its fingers connotes a distinct symbol and meanings. It gave us deeper understanding of Buddhism. 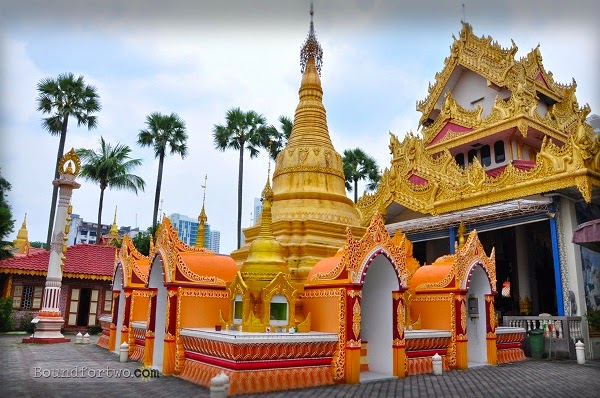 Aside from the huge standing Buddha, a golden Chedi stood beside the main temple. It’s another point of interest for visitors who believe it’s a mini version of the famous Shwedagon pagoda. It has its own charm that lures every first timer to look at. 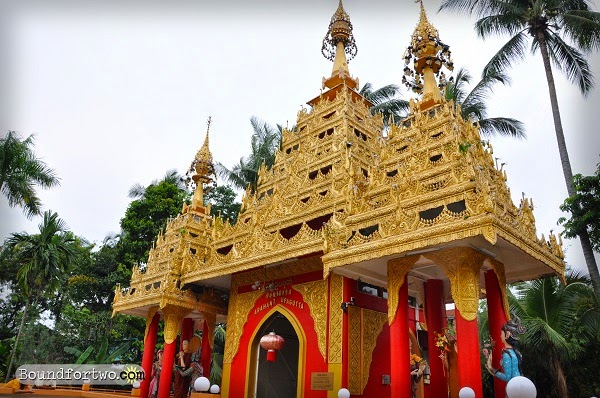 Another unique structure at Dhammikarama compound was the golden multi-tiered roof Arahant Upagutta pavilion. It houses the image of Arahant Upagutta, a spirit believed to have a power of fulfilling wishes. We didn’t wait for someone to convince us. We said our own wishes and believe it or not.  It became true, to travel and visit Myanmar. 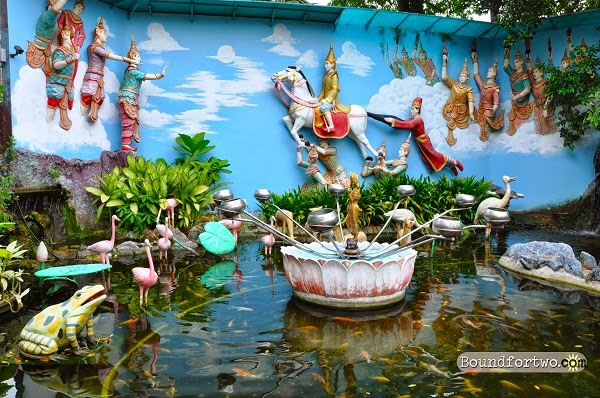 Adjacent to the pavilion was a beautiful pond with an interesting mural. It depicts Siddharta Gautama’s great renunciation. It’s where he denounced his worldly possession and follows the life of being ascetic. It shows the battle of good (devas) encourages him while the bad (maras) deterred him from doing so. 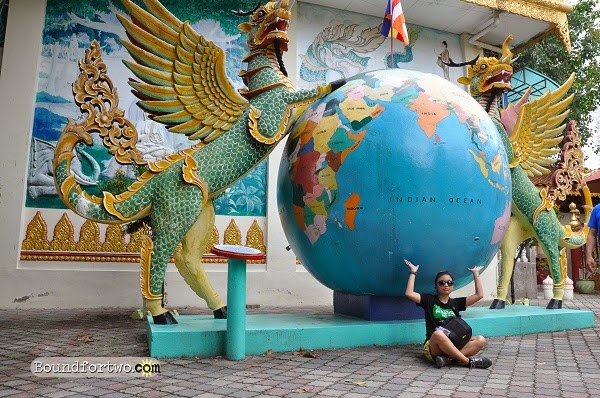 Behind the main temple, was huge globe guarded by a pair of winged chimeras known to as Panca Rupa. They acted as the “Guardian Protectors of the world”. 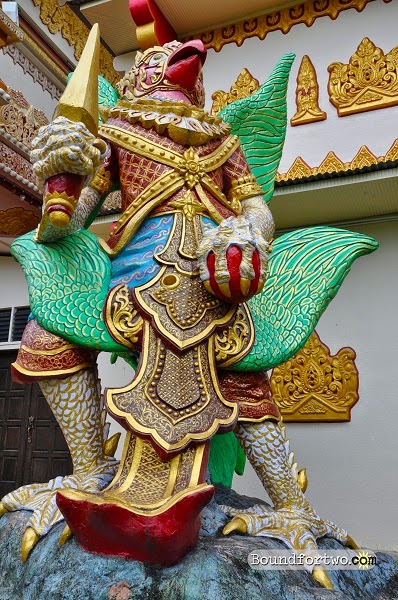 Another symbolic mythical creature which we’d already identified from a distance. An image of a bird-man with an eagle’s beak, wings, was no mistake, from a Garuda. This mythical creature revered both in Hindu and a symbol of wisdom on the context of Buddhism. 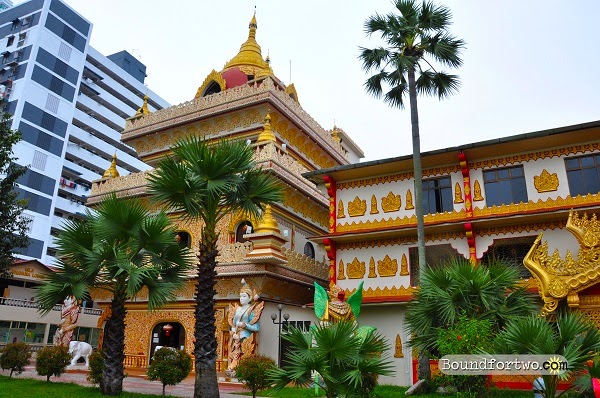 Beside the Garuda, was the Golden Pagoda Bell Tower, which is a newly built structure at the Dhammikarama ground. The golden stupa, mini chedi, and Burmese style were obviously derived from Burmese architecture. The bell is located at the top in the tower which gives a nice vantage point looking at the temple ground and it’s neighboring Wat Chaiyamangkalaram.
Dhammikarama Temple surely deserves a visit when visiting Penang. We don’t think our visit to this temple was a preface  of our unexpected trip to Myanmar which just happened a month ago. Of course, that will be an another story to tell.