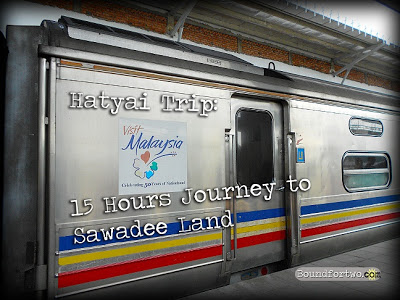 21:20 30/8/2012 The aversion of weather daunted us and thrilled, reminding our preoccupied brain that a chance of missing the 15-hour train ride is highly possible. We can’t afford to miss it but the slim chance has unlikely grown. Sky was off for the 9-6 routine and we tried catching up to get a cab the soonest . We disembark to nearest LRT station thinking it’s a  wise decision and expecting the cabs were just waiting. But we had waited long enough and our subconscious mind dictates us to leave the place or else we’re doomed. We’re running like a mad and all we could hope was a good cab driver that will drop us to our abode, pick up our things then zoom to the train station. Apparently, the first driver we approached was a crook, he tried to ripped us off for triple of the normal rate. We could use all profanity words we’d known but we’d rather kept our composure and look out for another one. Yet, we have to decide quickly as time was running out and it’s almost 7PM, two hours more before our departure. We drag ourselves and get the prepaid coupon for a taxi to ensure the cab drivers will not demand an extra fare. The queue was too long and  was able to finish 2 chapters of John Grisham novel before we hopped into our taxi. A sigh of relief when taxi driver senses our urgency to reach the destination as quick as he can. He was not over speeding but he had that traffic skills if you know what I mean. When we reached our condo, all the office clothes were thrown out to laundry bin then took a quick shower followed before we head back to KL Sentral.

It’s almost 8PM and we’re still in our room, double checking and make sure our travel documents were complete and ready. Then we hailed a cab and agreed on metered taxi fare, which is the standard. Normally when heavy rain comes, all the passengers we’ll race each other to get a cab. An opportunity for the scoundrel to overcharge the helpless commuters and made them agreed on a hefty fare. Though they wouldn’t force you but it will make you no choice  especially when you’re   beating the clock. We consider our selves lucky as he didn’t bother to cajole but instead gave us a friendly waive for safe travel. God bless his Soul. 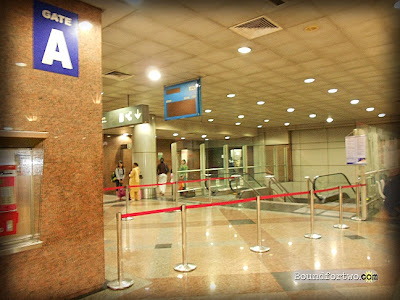 We’re  paranoid and rushed to train platform as we heard of a train departure announcement. After we realized it wasn’t our train, we asked the staff if we’re on the right platform so we could stay behind. He blithely informed us that we’re too early for the boarding call. So we still have the time to fill our grumbling stomach  at a fancy restaurant near the waiting area.

21:00 All the passengers had been called and instructed to queue on Gate A bound for Hatyai, Thailand. Tickets had been carefully inspected and the moment we stride on the escalator, excitement filled our hearts on what will happen on the 15-hour journey to Sawadee Land. 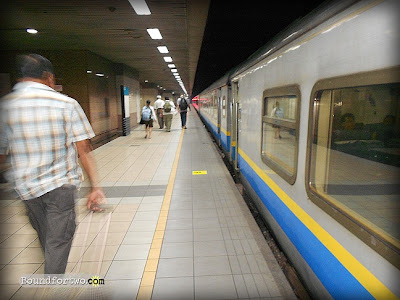 Oh, so this is Senandung Langkawi, our beloved train. We’re rushing to look for our assigned coach and the staff happily point the way. L8 , the sleeper coach was on the farthest end of the train, good luck. This will be our moving temporary abode for the next 15 hours of our dear life. For starters, there are only two coaches bound for Hatyai one is a sleeper and another one will intend for seating and the rest of the coaches will be detached before reaching the border. 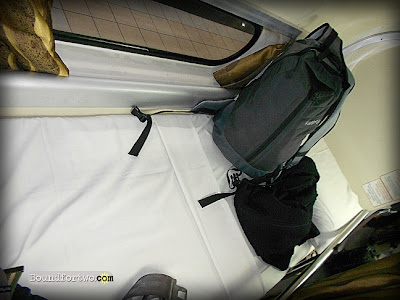 We’d found our own bunks, dislodge our baggage and familiarize the sleeper coach. It’s important to know where’s the  loo  and the exit in case of emergency. Then returned to our designated crib. Both of us occupied the upper bunks provided with a pillow, newly machine wash bed cover/ blanket. And curtains that’s been helpful to conceal from noise and light coming to the coach. 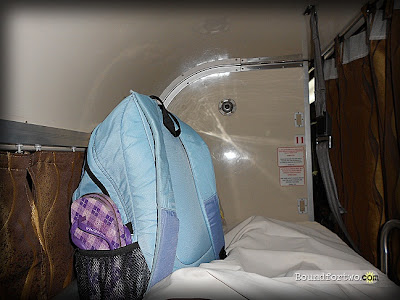 21:20 The engine had started to roll  and few minutes the train left KL Sentral bound for Hatyai. It runs so slow comparable to that of KTM, but we’re not complaining. Why? Because it showed us a spectacular view of KL at night. Even though we’re living in this metropolis for more than a year , the cityscape at night never failed to amaze us and KL is indeed, the garden city of lights.


The train had started to accelerate, I sprawl like a dissected frog and contemplating on an unfinished itinerary.  I’m heavily dependent on online information. I usually start searching things to do, places to go, tourist spots as my primary keywords. Though I found a bunch of helpful information about Hatyai but my half brain thought  the other way. My eyes shut then I lost track of time. 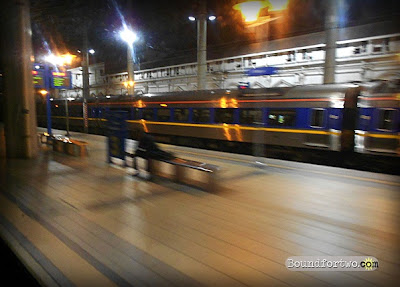 01:00 The train come to halt somewhere in the state of Perak, can barely recall the exact town. I heard a buzz of people alighting and next thing I knew the train was moving fast. I felt like a baby being swayed in a hammock. I want to doze a bit and hope to catch up Summer on dreamland.The constant shaking ddrivesme nuts and send me to oblivion. I’m bitter and found my self helpless after doing all the things that can make me snooze. 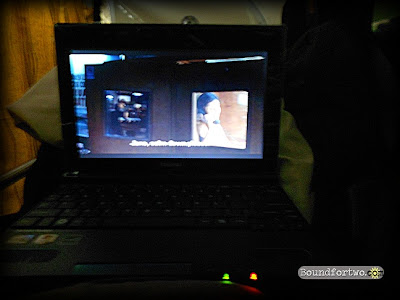 01:45 I gave up and I need to do something that can make me occupied . I just remembered I downloaded some travel movies recommended by no other than Gay of Pinay Travel Junkie. I watched Y Tu Mama Tambien (And Your Mother Too) and was enthralled by Mexico’s scenic view. A nice choice eh, for those who had not seen it.  The movie is a story of friendship, travel, lust, and finding your self. I would suggest to watch with a pair of headset and of course with english subtitle. Movie+Dawn+cold+alone these combination were lethal, if you know what I mean. It’s been past 3AM, I close my eyes, and will be dreaming of Boca del Cielo (Heaven’s Mouth). 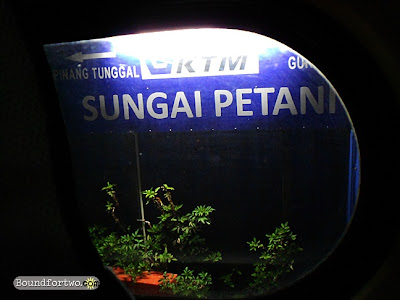 05:55 I woke up not because the train stops but the direction of train was kinda weird.  It was heading on the opposite way after some 7 hours. Maybe, we haven’t notice the shift of train tracks or could be going back to KL. Hoping it’s not. My doubt had been answered when the train halted in Sungai Petani, a town in state of Kedah, Malaysia. So we’re going to Hatyai then. 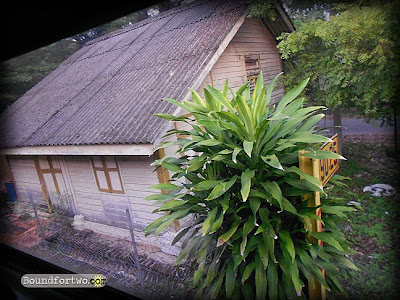 07:05 A beautiful morning greeted me when our train disembark some passengers in Alor Setar,  Kedah. With the short stop over, I buy the time, sneak my head out and took a deep breathe. The serene and tranquil atmosphere of this laid back town just like in Malacca. My affection to retire and live in a rural town grow more. 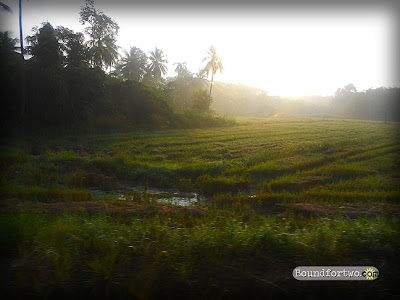 08:00 The Sun showed up, brighten  the green paddy fields of the rice granary state. Whatever side I look on to, I only see green and rice fields. Once I was dreaming like this somewhere in Nueva Ecija, Philippines and never expected to fulfilled it in Malaysia. 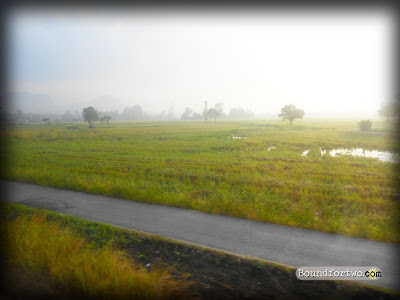 I was hoping to see farmers cultivating the paddies but haven’t seen one. Maybe all of them took an off since it’s Merdeka (Independence Day). For half an hour, my eyes was delighted to see the vast agricultural land in Perlis, Malaysia. 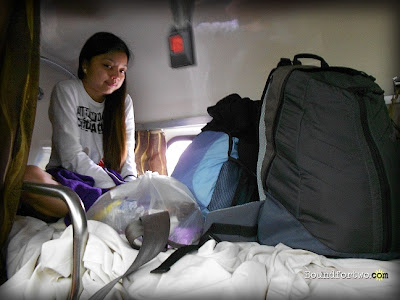 I forgot I need to fulfilled my obligation as prince charming to sleeping beauty. Oops to late, she had already woke up when I pass to her bunk. Then the train staff reminded us to prepare our passport as we’re near to the border. 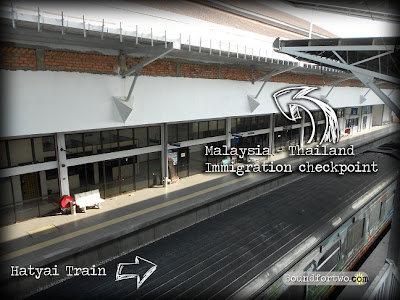 8:40 So far we had to pass the states of Selangor, Pahang, Kedah , and Perlis, Malaysia. We’re now in Padang Besar border town of Malaysia and Thailand. After obtaining the exit stamp of Malaysia and entry stamp of Thailand, we took a snack break in the cafeteria before heading back to the train. We had waited for more than two hours before the train left the border and entered Thailand. 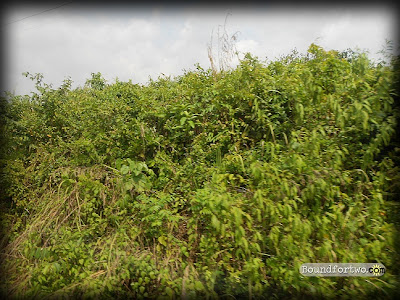 11:30 Few minutes passed the border, all we could see were shrubs and tall grasses. A typical scene when you pass by to a province. We saw ladies riding on motorcycle, patiently waiting on the intersection and will zoom off once the last coach pass on them. 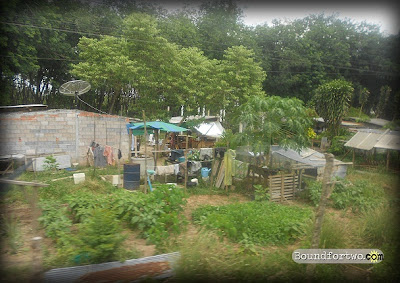 We’re kinda surprised after seeing some shacks in Thailand same like in the Philippines. But one that really caught our attention was the satellite dish mounted on their shanties. Wow, pretty sure they’re enjoying watching premium channels through those parabolic antennae. Anyhow, we waited not long enough and few minutes we’ll be greeted by the warm and friendly Thai people. 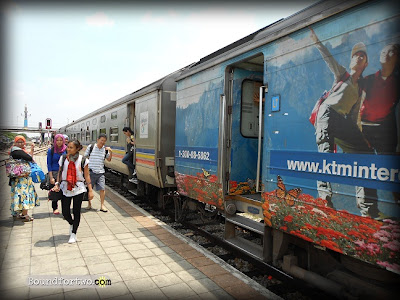 12:25 The train staff reminded us to be ready since we’re nearer to Hatyai Train Station. Officially we set foot on Sawadee Land after 15 long hours of the journey instead of 13. Our first sleeper train and the land border crossing were indeed epic. But the adventure doesn’t stop here, it just gets started.

On the succeeding entries, we’ll share why we got stuck in Malaysia-Thailand border for two hours, and our temple hopping and gastronomical adventure in Hatyai, Thailand