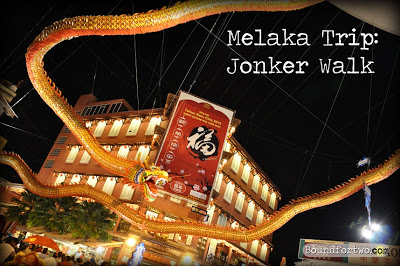 20:20 28/4/2012 It’s been six months now the last time we went there. But our memories still vividly recall what had happened that night in Jonker Street. It was one of those a night to remember kind of thing and hoping for a version 2.0 The bustling crowd, the assortment of bargain stuff, the delectable Nyonya food and much more. We’d been grateful to experience the  Vibrant Night and the famous Jonker Walk in Malacca where one shouldn’t be missed when visiting Malaysia.

Just we crossed the bridge, we clearly saw the Jonker Walk arch glowing with colours from a distance.  The 121 metered mythical creature suspended from the air known as Prosperity Dragon caught every tourists  attention. It’s believed to be a symbol of power and good luck. You  can never go wrong going to Jonker Walk unless you pretend to be  lost. That neon signage and massive dragon will pimp you all the way, trust us 🙂

We notice that bunch of people gathered before that famous welcome signage. It draws the attention of the masses before going to Jonker Walk, and that made us curious as well. We tried to peek but  the six-footer guys overwhelmed us. So we roamed around and look for a blind spot that we can sneak in. 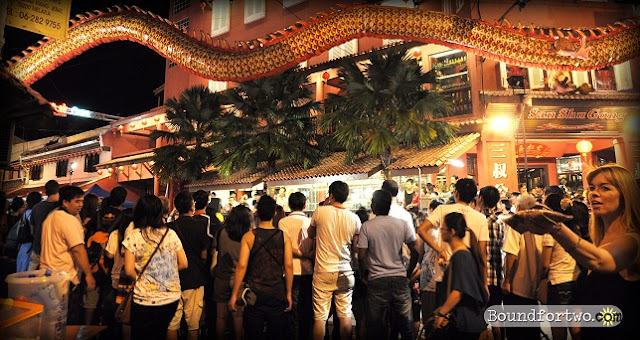 Summer found a spot and guide us to  the front row. We’re not really sure what drove us  there, but we knew something spectacle will happen. Then we saw an old uncle with his black sporty suit with a wrist protector. He looks like an acrobat performer that can be usually seen on the circus. 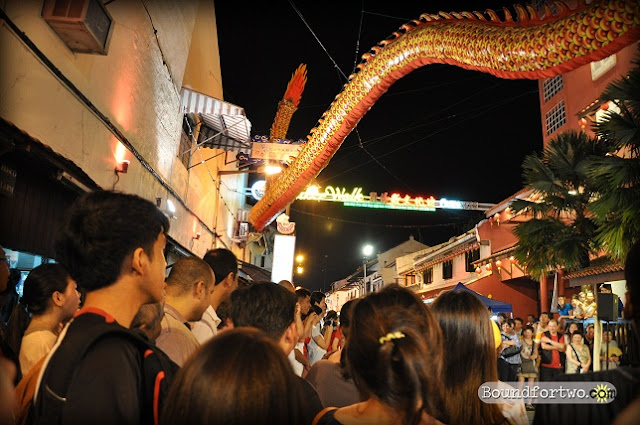 At first glanced we guessed he’ll be smashing a brick or a plywood with his knuckle. But we’re in awed when we witnessed he pummelled a coconut shell with his finger. Yes, by using his  index finger, what a bone-crushing moment. Before we could react, a thunder of applause and shout of amazement dominated the encircling crowd. Then he knelt down, thought he suffered the excruciating pain from that act. He smirked and he put something on his wrist like a liniment then he was lively again. Hmm, magic? Of course not he’s the great Kung Fu Master Dr. Ho Eng Hui When he felt that the mob want a re-enactment. He started to tell tales and prolonging the crowd’s request. One of his tales was about his acquaintances of highly profile person and celebrity (Jackie Chan) with laminated pictures showing off to the people. But, the crowd didn’t pay attention instead they keep on cheering him. Before we left, he let the crowd took a sample of that wonder oil that he pitched in. He sprayed on them, including us .Now we understood  the connection between his act and the wonder tonic. Honestly, the tonic has that magical effect as I pat it on the back of my neck as he instructed. I felt invigorated and temporarily relieved from stress caused by a whole day of walking. As much as I want to purchase that miracle oil for my old folks, my two comrades had veered away from the crowd. So I obliged to follow them and continue our Jonker Walk adventure while the old man continues with his finger penetration on coconut show to the newcomers (that sounds erratic, or just green-minded) 🙂

The Jonker Walk
Warning: Guys Beware of your Wallet 🙂

OK, it’s relatively safe in Melaka I’m not referring to snatchers or pickpocketers. Guys will surely scratch their heads when their wife or girlfriends will go on a shopping frenzy. Who will not? Jonker Walk was really intended to lure the ladies to splurge their moolahs. But it doesn’t mean the whole kilometer stretch is feminist, there will be an alley for the boys, wink. Gals, no worries it’s not what you’re thinking will reveal it later. Continue to scroll down. 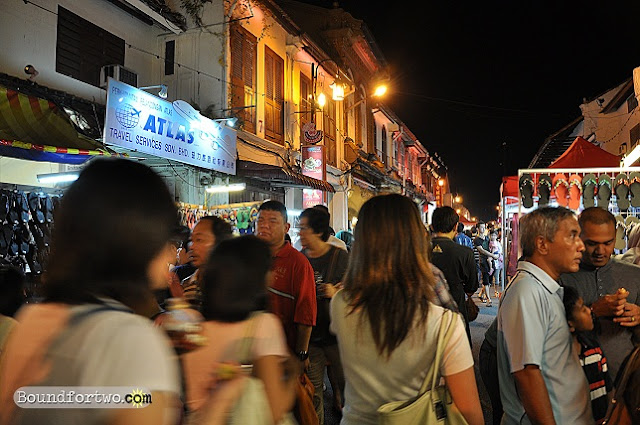 Just below that famous arch was the start of our happy night shopping spree but we’re on a tight budget. On the first few stalls was an array of locally made step-ins and sandals. Beautifully  handcrafted slippers were among the best sellers. The prices were affordable compared from KL Chinatown or Pasar Seni. 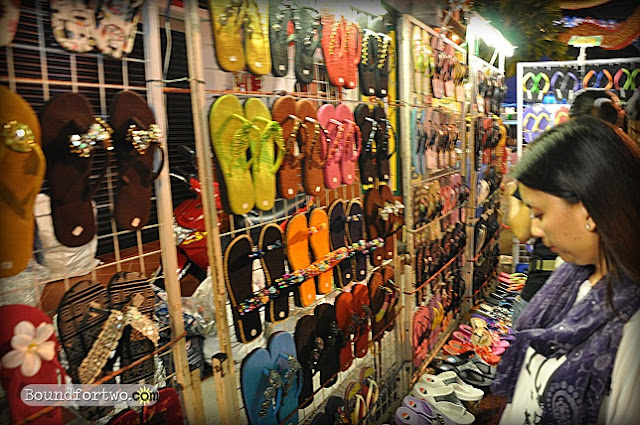 And then just few pace,  ladies accessories were displayed to entice girls penchant. The fancy necklaces, earrings, rings and even eyewear were all inexpensive. The prices range from 1RM to 10RM and don’t forget to bargain. 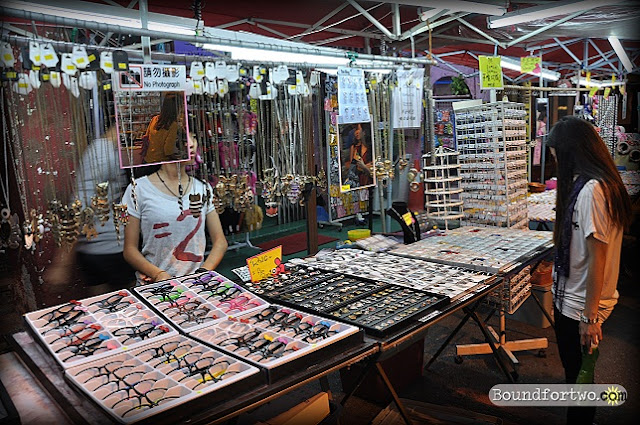 But if you’re looking to a bit classy one, check the Jonker Gallery. They have a lot of choices in    accessories and tops for women. Expect for the prices on the mid-range and fixed. Certainly not for a cheapskate like us. 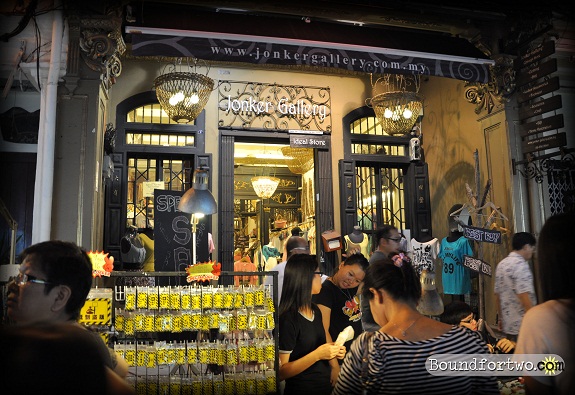 Then  we walk out to find something for our nephews and nieces and bumped to a stall with a great collection of pencil headers. This reminds us of a friend who collected different kinds of pen headers and has a hundred of them. 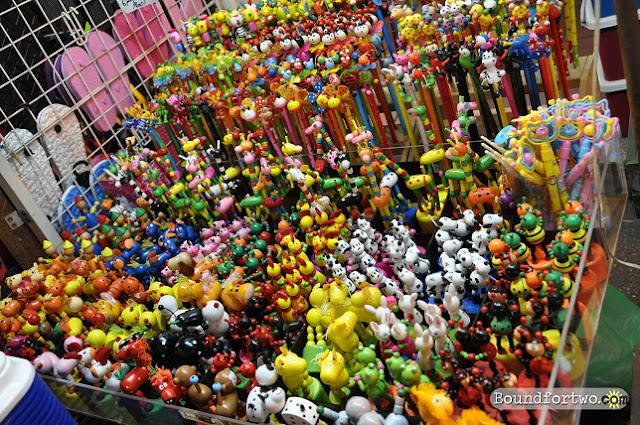 Instead of the headers we buy those cute BFA free refillable plastic bottle. Which was a pretty good deal compare what we bought in Pasar Seni? These plastic bottles were very handy and ideal for a trekking, city traipsing and of course for the kiddos who go to school. The stalls along Jonker Walk were not only limited to ladies stuff. Antiques, local crafts, herbal medicines, souvenirs,  can be found here as well. 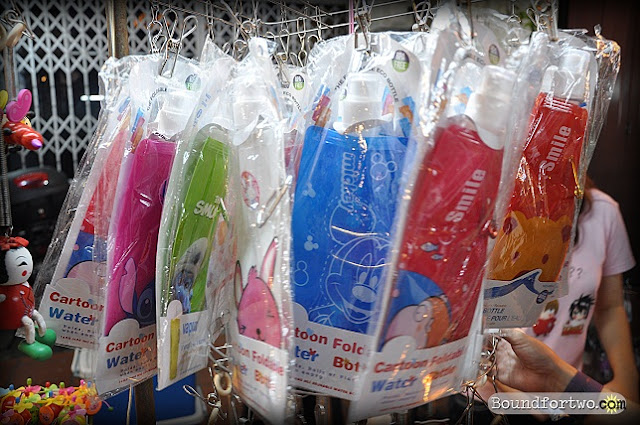 When we realized that we haven’t eaten a real food yet. We searched  the whole stretch of Jonker Walk to find and settle our grumbling guts. Though there’s a lot of restos, bars and food stalls, all of them were jam-packed and you have to queue before you can take a seat. Which left us no choice but to be satisfied with whatever food on the go along we encounter.

A twisted fried potato got us hooked and made us wonder how it turned like that. Anyway, there was no rocket science applied into it but just a special machine that makes this potato looks more appetizing. Then fried just like how a regular french fries is done and sprinkle it with a flavour of your choice.

And another thing that caught our attention was the preparation of the Sugar Cane Juice. In a few easy steps. Uncle had manually peeled the skin off.  Then his assistant put it on the pressing machine until the juice is extracted to a pitcher. 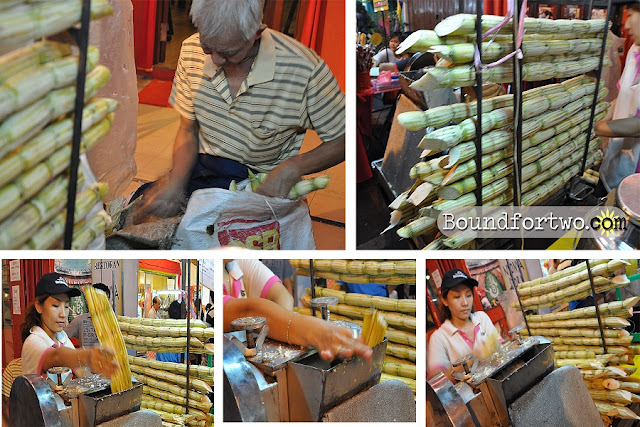 Voila, a refreshing 100% sugar cane juice with no preservatives. It’s heavenly delicious and healthy. You don’t have anything to worry as it’s proven to have a low glycemic index. So diabetic will still enjoy it without counting their sugar intake. 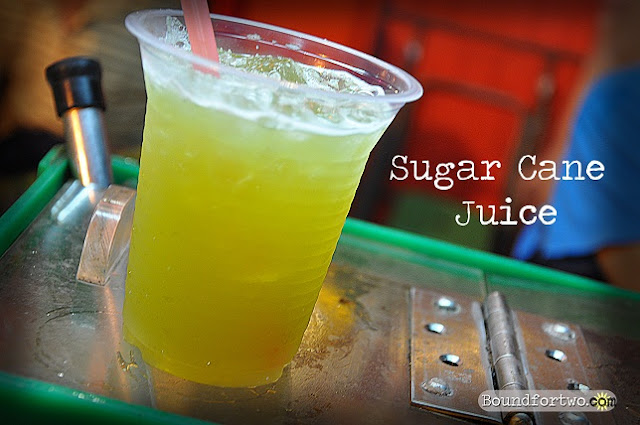 So far this is the best sugar cane juice we ever tasted in Malaysia. An additional ice means cheaper, so better to add one 🙂 Somehow this juice alleviates our hunger and replenish our energy.

A Body Builder, Street Performer, and The Heritage Park


When you started your Jonker Walk near the Malacca river you’ll surely end up cam whoring in the heritage walk. Trust me, tourist will take a breather here,  took a photo of that Muscular Guy and make it as a profile pic on their FB. 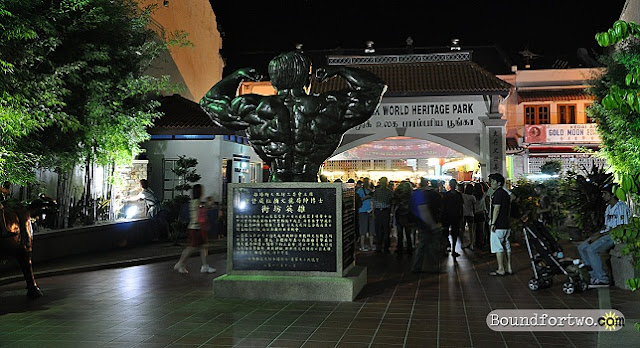 You might ask who’s that body builder guy with a big statue in the Heritage Park. He’s Datuk Wira Dr. Gan Boon Leong, the father of body builders in Malaysia. He was previously Mr. Malacca, Mr. Malaysia, Mr. Asia and Mr. Universe. So he’s really an icon in Malacca enough reason to take a photo with him.  Yes, we give in to his invite and did a couple of shots. 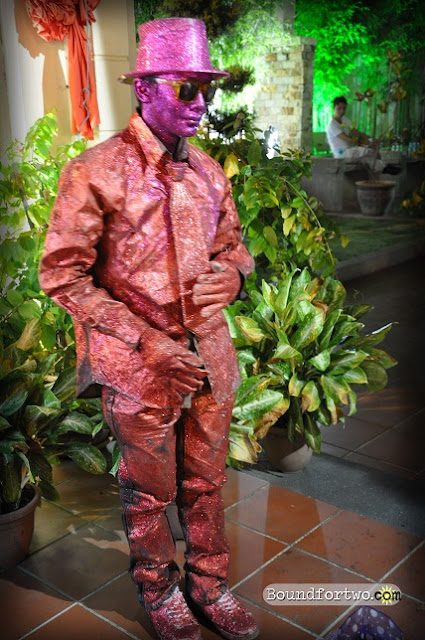 When we left the park we bumped to this pink or say fuschia glitter man, the lone street performer. It’s really surprising to see this kind of street act. Since you can usually see in it Paris or New York. He ain’t move for the whole time we spent at heritage park. And that made us ponder, and had that silly thought. What if he feel itchy on any part of his body, will he move? Since we’re too tired waiting , we decided to move on until we reached the end of Jonker Walk. 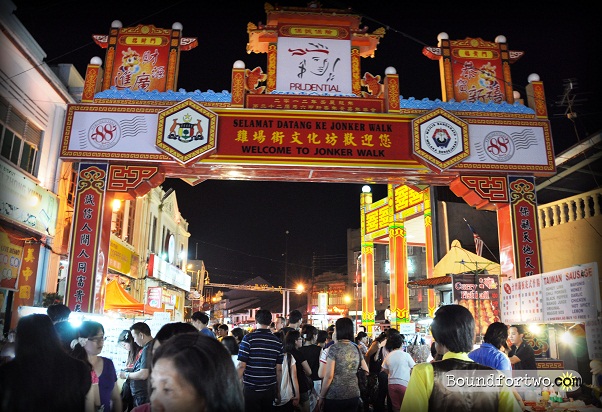 We just discovered that things are gone cheaper if you’re almost on the end trail. So we have that last-minute buying before we headed back to our temporary abode. 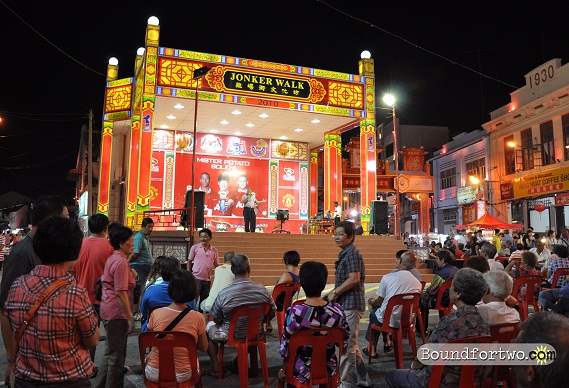 Oh wait,  if you’re a big fan of karaoke, watch the senior belted on top of their lungs with their favourite song on the centre stage just near to the end Welcome Arch. It’s one way of the local government to gather the old folks on weekends and showcase their singing prowess. We had listened to one of the contestants and he made justice to the song, as the folks give him loud applause. That’s somehow concluded our Jonker Walk and a whole day of traipsing in historical Malacca. And we’re looking forward to coming back and indulge to their best Nyonya Food. Who’ll go with us next time?

Food that we ate in Malacca is in the next.