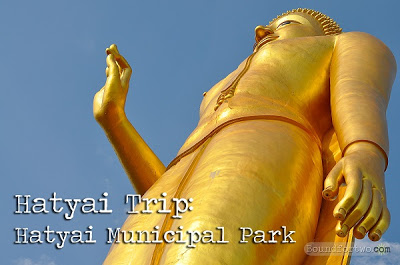 17:20 31/8/2012 After an easy breezy check-in and obligatory washroom trip at Tune Hotels Hatyai. Our itchy feet were back on track and felt more exhilarated to explore Hatyai. Without any map and itinerary on hand. We’ll be relying on locals suggestion and depend on luck since we’re unable to finish the itinerary prior to our trip. We had agreed to visit Hatyai Municipal Park and we  didn’t know we’re up for a challenge since the park was relatively far from the hotel we stayed in and there is no public vehicle going there.  The option we have was to rent a tuk-tuk  but most of them offered a very steep price even for just a one-way fare. So we asked help from the hotel staff  to arrange a tuk-tuk ride for us to avoid being ripped off. Instead, she recommended a car service which has the same rate that tuk-tuk drivers offered and have availed it.
In less than 30 minutes we reached Hatyai Municipal Park premises. An all in one recreational park which King Rama V Statue, 4 Face Buddha, Cable Car Complex, Planetarium, Standing Buddha Complex, Happy Buddha and Guan Yin Temple were all located. Due  to time constraint, we only visited the Standing and Laughing Buddha and Guan Yin Temple.
Guan Yin Temple
It’s located near the foothills of Hatyai Municipal Park, adjacent to the Happy or Laughing Buddha. 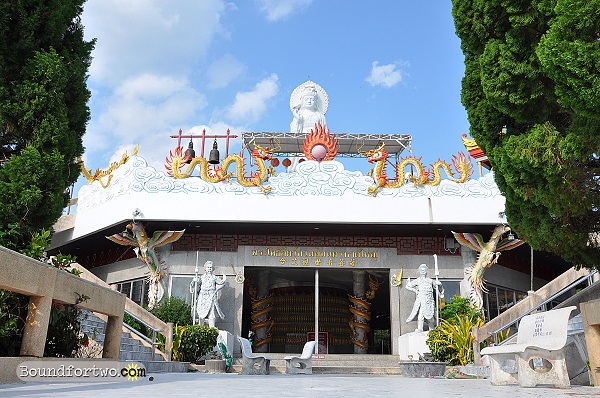 A temple in honor to Guan Yin or Kuan Im in Thai. She is revered as goddess of mercy to east Asian Buddhism. Above the temple, is a massive Guan Yin statue was erected. 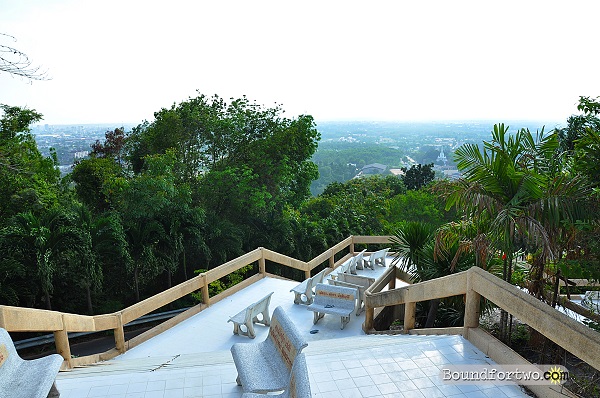 Before reaching to the gigantic Guan Yin statue, we turned 180 degrees and been rewarded with this formidable sight, a panoramic view of the city of Hatyai. Somehow it’s only a preview as what our driver/tour guide told us. 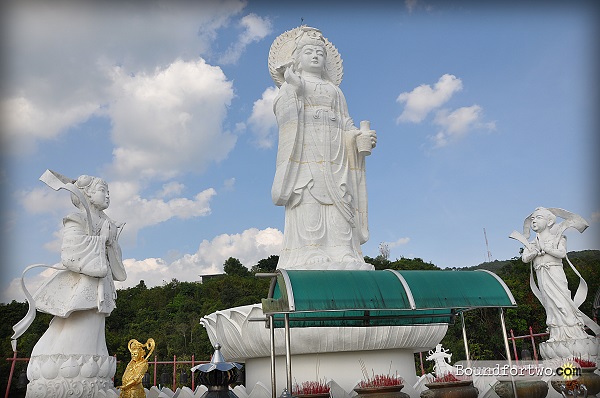 When we reached the top, a 20 feet Guan Yin statue with her two acolytes( Dragon Lady and Shan Cai) greeted us. 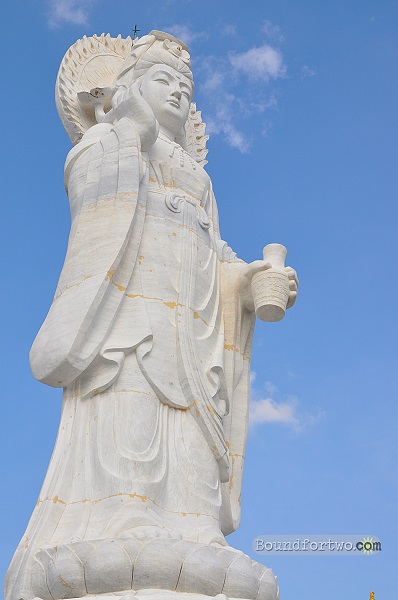 Kuan Im as known to Thai, oversee the city of Hatyai. The jar on her left hand signifies pure water (purity)  and right hand wielding a willow branch. 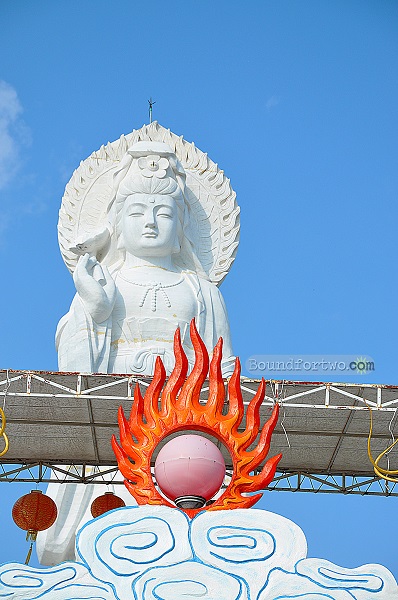 While her crown depicts an image of Amitabha Buddha. Devotees usually pray to Guan Yin during their difficult times of their lives also for ones seeking an enlightenment. 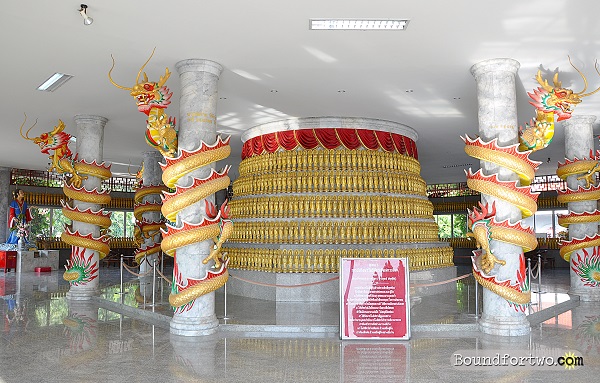 Just below the big statue is the Hall dedicated to Guan Yin. The eight Pillars coiled by mythical dragons and thousand of mini Guan Yin statues occupies the hall’s interior. 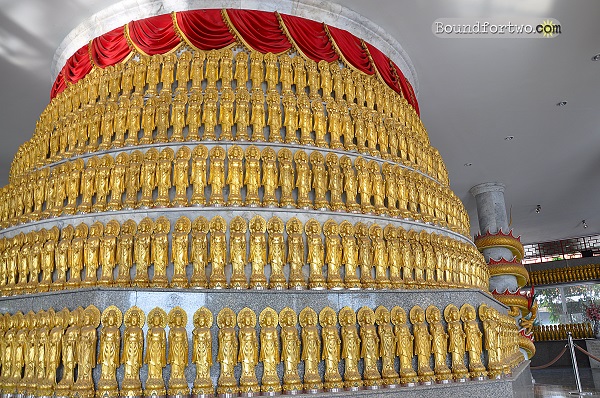 On the inner hall, a thousand of mini Guan Yin statues encircling the octagonal altar. Out of curiosity, we count them manually but we’re unable to continue because a lot of visitors flock to the inner hall and we lost track of counting. 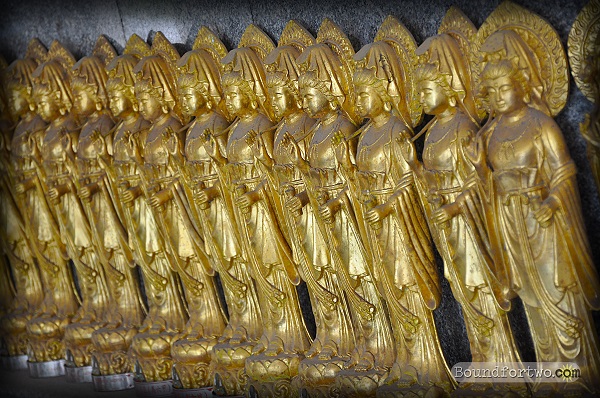 In  our estimate, it would reach a thousand at least. It embodies as most compassionate goddess in East Asian Buddhism. 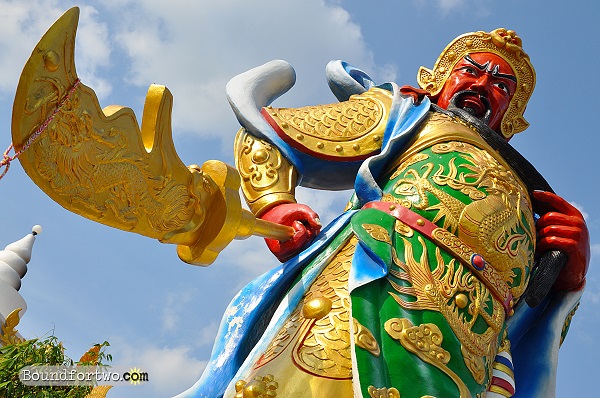 
Just a few pace from Guan Yin Temple, another important figure of East Asian Buddhism, the laughing or happy buddha. 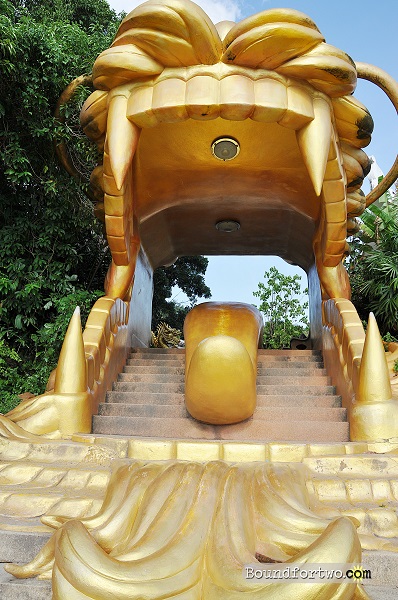 But before we got acquainted with the Happy Buddha, we’re welcome by a big golden dragon head. We passed through golden stairs that lead us to its opening mouth and it’s prodigious tongue which the kids confuse it as a slide 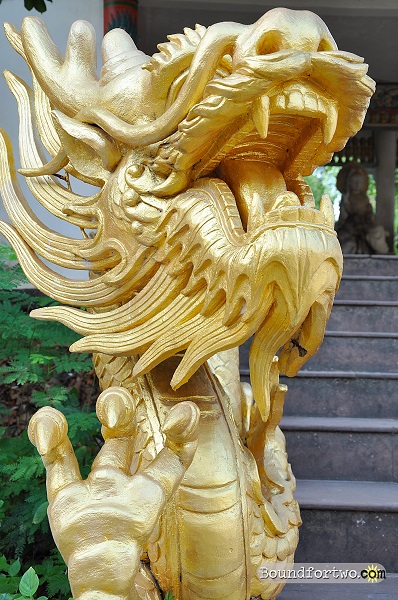 An enrage Golden Dragon protects a mini shrine just near to the Laughing Buddha which tells us to back off. 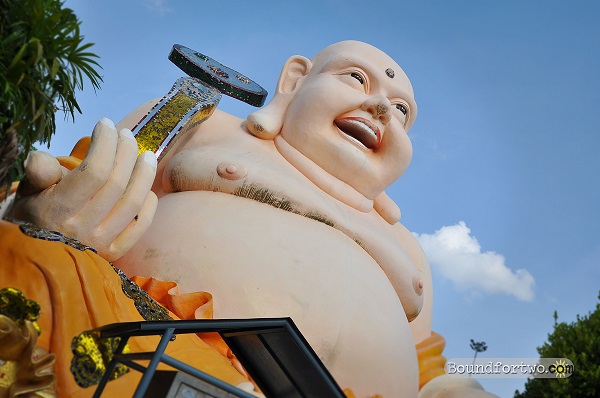 An immense happy Buddha seated in front of our eyes. A laughing Buddha or called as Budai, is a Chinese deity not to be baffle with Gautama Buddha.  Budai is an epitome of happiness and contentment and popular belief that rubbing his belly brings good luck and wealth. Too bad we can’t get hold of his belly since it’s too high.

A 20 meter Golden Standing Buddha overlooking the city of Hatyai, the highest in Southern Thailand. The complex had several small temples, prayer halls and adjacent to it is Cable Car Complex which connects to 4 Face Buddha. 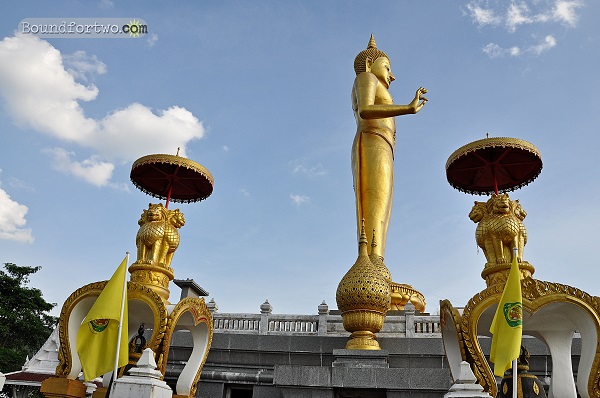 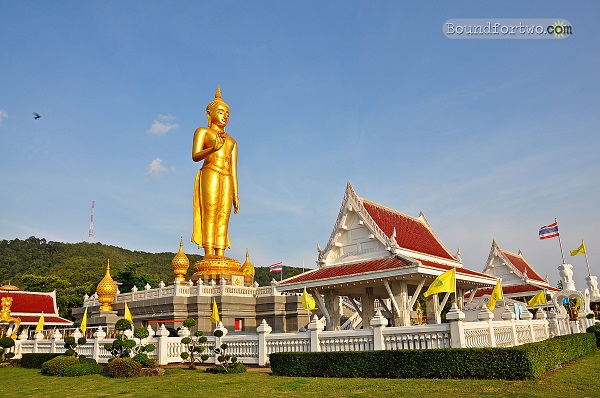 The Phra Buddha Mongkol Maharaj as known to Thai was established during the birthday of  King Bhumibol Adulyadej. 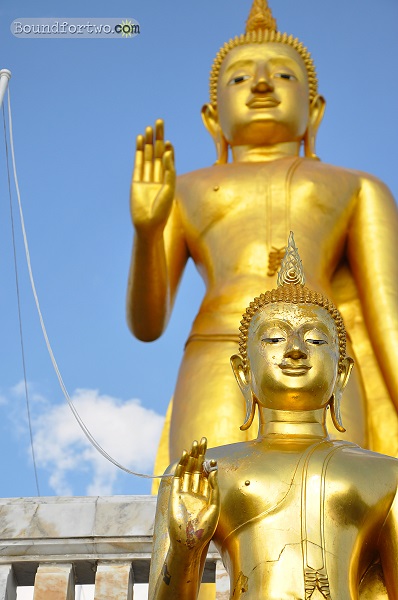 It was our first time to see a standing Buddha as big as this, truly an impressive work of art.      The right hand raised  and forefinger touches the thumb denotes Dharmachakra (the wheel of Law) which is the most important symbol of Buddhism. 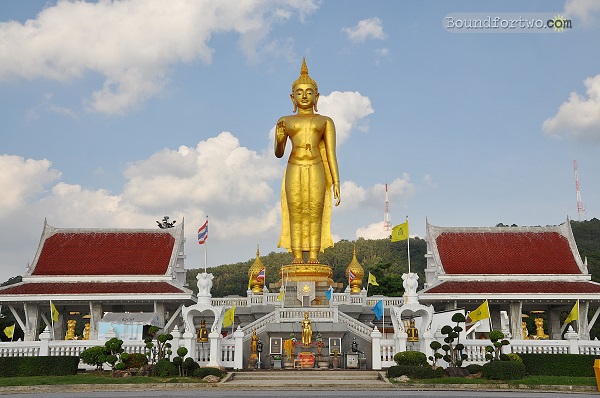 Standing Buddhas were common in Thailand and Laos and this symbolizes fearlessness. A gesture that made after gaining enlightenment.

The massive Standing Buddha stood on top of the hill makes it visible from a far. Thus, reminding their faith and connection to Buddha. As we  face the opposite from the Standing Buddha, we’d been astonished by a panoramic view of Hatyai City and Province of Songkhla.  That then we recalled what our driver told us, “there’s a better view up above”, we didn’t know he referred to this breath taking scene. Looking up to the horizon made us realize how much we want to explore more of Thailand.
Temple Raider,
Sky and Summer
Facebook Comments
No comments yet