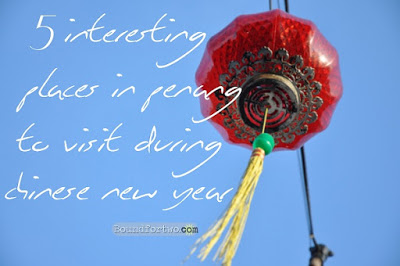 A lot of people avoid traveling during the festive season like Chinese New Year. It translates crowd airport, jam packed transportation hubs and the list goes on. It maybe a hurdle to overcome. But for a foreigner, it means holiday, an opportunity to break that monotonous corporate gig. This celebration is observed by most Chinese across the globe. They observed starting with new years eve dinner, tossing of yee sang, lightning of fireworks, gift giving and of course family reunion. Here in Malaysia, Chinese New Year is observed for two days. Thus give us  48 hours to ramble without spending our precious vacation leave. Instead of flying to another country, we celebrated it here in Malaysia.

Here are the five interesting places to visit in Penang during Chinese New Year.
Snake Temple 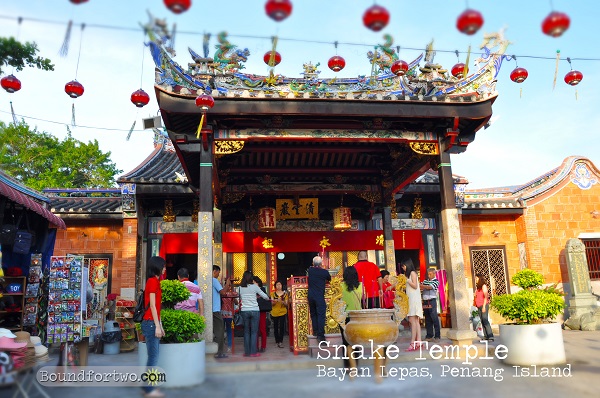 This temple has been built in honor of Chor Soo Kong, a Buddhist priest. Legend said the snake moved into this temple after his demise. Slithering as it may sound but the snakes dwelling on this temple is innocuous based on what we heard. They’re just dangling on the tree branches with warning signs not to touch. 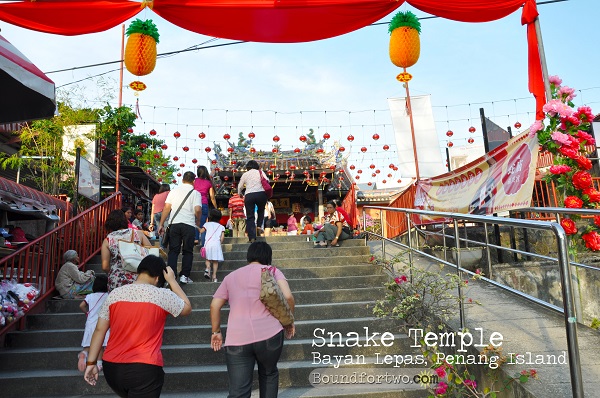 Devotees are paying homage to this temple and tend to become crowded especially on this occasion. During our visit on the first of day Chinese New Year. Families after families swarm lighting their joss sticks and saying their prayers. Probably thanking for a great year to come.
Chew Jetty 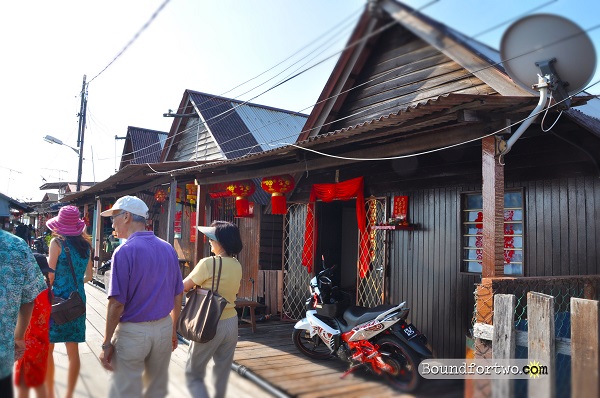 Chew Jetty is a settlement with wooden houses built on stilts. This unique heritage community already stood for more than a century. The name Chew is the surname of the family who settled on Penang waterfront. They’re just one of the family of many migrants from Fujian, Southern province of China who came to the shores of Penang for a better life.
Walking along the wooden pathway is like meandering to the past. You’ll get feeling time had stopped in this area despite the rapid development of Penang island. Whatever angle you look at it brings a nostalgia of simple living a hundred years ago. 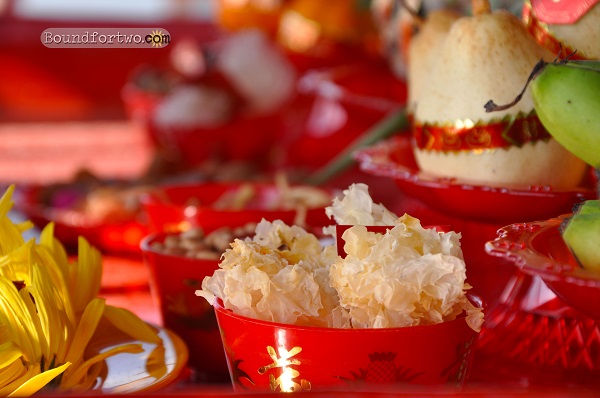 Wooden houses are heavily decorated with red ornaments such as sphere lanterns and red fabric. Small altars are set with different kinds of presents like fruits, flowers, food, and other offerings. 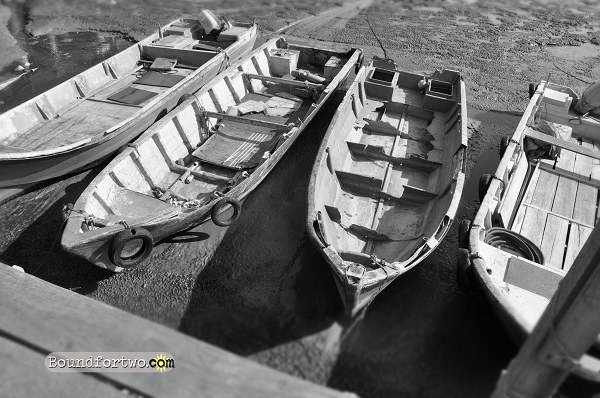 In contrast to the merry atmosphere of the stilts, a melancholic scene of dilapidated boat side by side can be seen along the jetty. Looking at it, surely it tells a lot of story of hardship and success.
Georgetown Heritage Site and Street Art 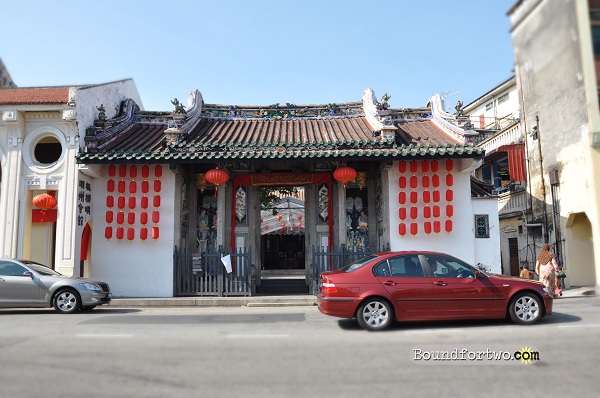 The UNESCO world heritage site of Georgetown stirs up during this season. A throng of tourist both local and foreigners stop this area. For a lot of reason, one is pretty obvious, the historical significance of this area during the early formation of Penang.
Clan houses such as Khoo Kongsi  are elaborately ornamented during the Lunar Chinese new year. It turns a spectacular visual and as a perfect subject for photographers.
It can be denied, the colorful graffiti, unique street art draws tantamount of art-ficionado whose some are genuine, and the rest are photo junkies. Ernest Zacharevic a Lithuanian born artist turn his art murals on walls and buildings which now becomes a tourist attraction itself.
Kek Lok Si Temple 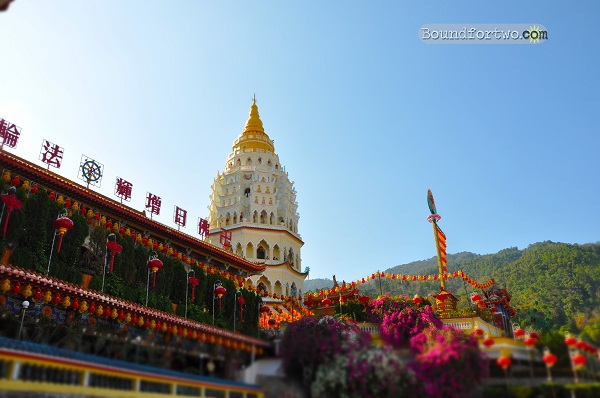 Known as the temple of supreme bliss is the famous and most visited Buddhist temple not just in Penang but the whole Malaysia. It also draws pilgrims from neighboring Thailand, Singapore and Philippines.
During the Chinese New Year,  thousand of lanterns with alternating yellow and red color are dangling on the temple complex. A quite number of potted miniature orange trees are lined up along the halls. It’s one of the auspicious Chinese symbols for luck and wealth. 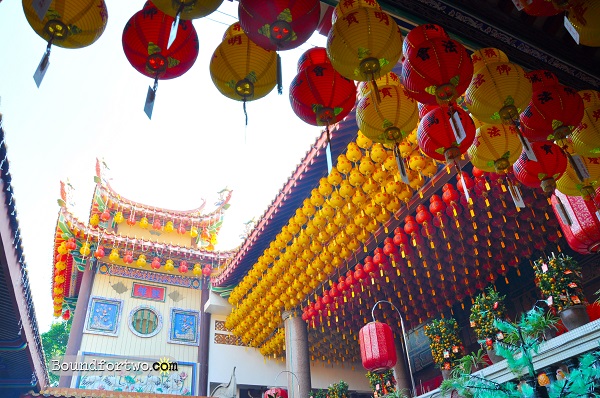 It’s quite crowded to visit during the festive season but seems worth it. Once you see all lit lanterns  engulfing the temple at night, you’ll run out of superlatives to express. Too beautiful not to miss. 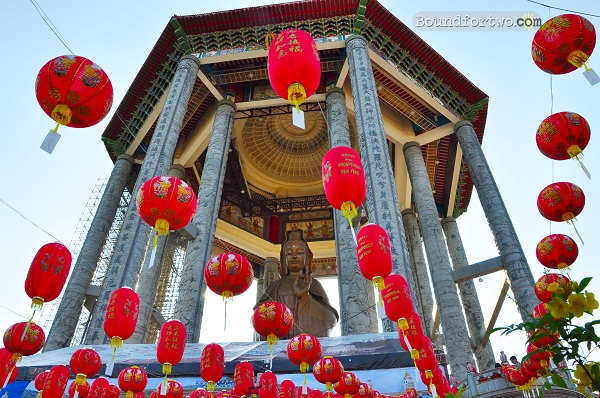 On the same vicinity at Bukit Air Hitam, taking funicular train up a hill will lead you to the altar of Guan Yin. Known as the Goddess of Mercy on Mahayana Buddhism, the pavilion stood with a height of 82 Meter which overlooks the hill of Air Hitam. 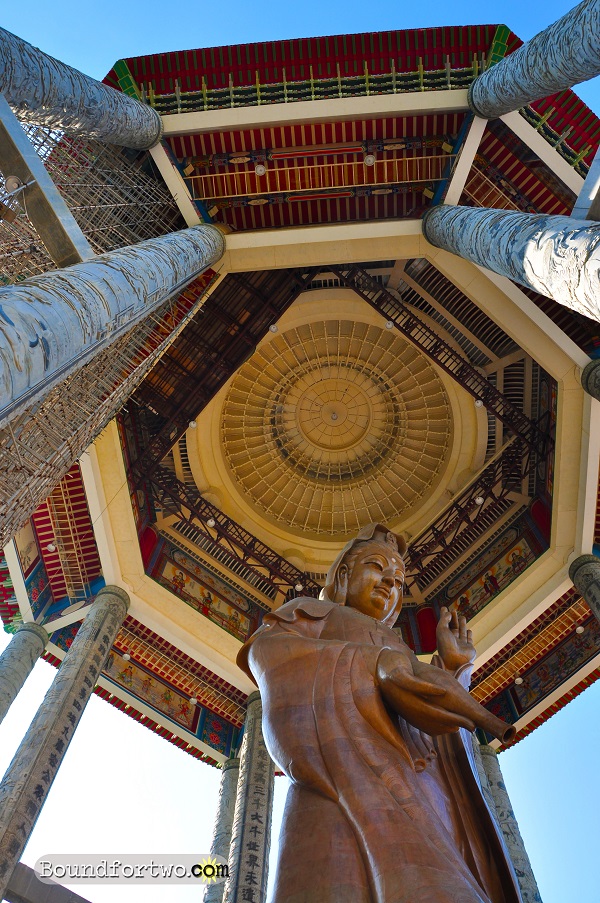 The 3 tiered octagonal roof enclosed the gigantic Guan Yin statue. It’s supported by 16 cylindrical pillars each carved with Chinese inscription. The whole pavilion had been elaborately ornamented and this whole thing cost at staggering RM40 Million.

A hundred of devotees queued up to pay tribute and say prayers to the goddess of Mercy. She is known as a protector of women and children and mostly revered by Chinese due to her unconditional love and compassion. 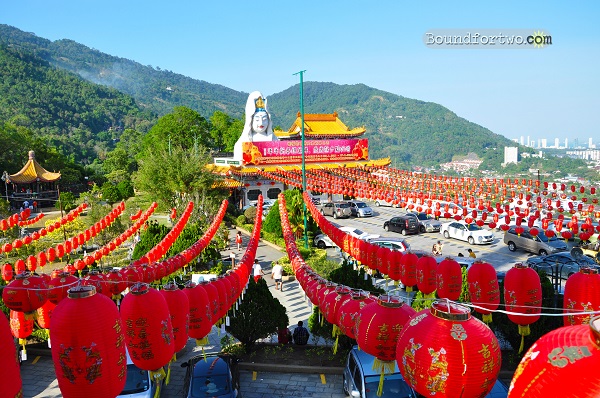 Yes, the same crowd from Kek Lok Si, will ascend here. The thousand red lanterns is beautifully lined up which almost cover the entire ground of Guan Yin Pavilion. When it’s lit up, the place turns magical, thus capped our memorable Chinese New Year.
When you got a chance to visit Malaysia during Chinese New Year, head up north and celebrate it in Penang.

City Wanderers,
Sky and Summer
Facebook Comments
No comments yet