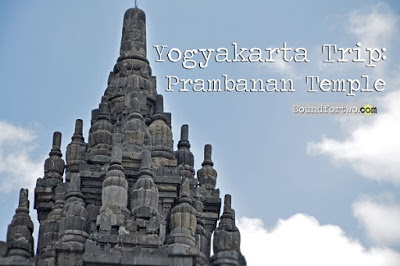 11:30 05/04/2014 The fifty kilometers travel from Magelang to Yogyakarta was achieved in less than an hour. Our guide Edho willingly demonstrated his Vin Diesel skills. He was adept in maneuvering the SUV and traverse the less taken road going to Prambanan. The narrow road, rice paddies, and salak (snake fruit) fields gave us a spectacular visual delight along the journey. We reached Prambanan soonest than we expected. It’s our second UNESCO heritage site for the day after fulfilling the first at Borobudur.

Prambanan temple is part of the Prambanan Archaeological site where hundreds of temple dotted the Central Java plain. If Borobudur was built for Buddhist, Prambanan was erected for Hindu worshipers. In fact, it was built on the latter after defeating the Sailendra dynasty.
This 10th Century religious structure earns the title as the most beautiful Hindu temple in Southeast Asia. Yes, to add that it’s the most astonishing and awe-inspiring one. Honestly, we ran out of superlatives on how to describe it. Let our 15 photos speaks for its timeless beauty.
The photos been captured were just a fraction of beauty from this 10th-century old temples. Still, we urge you to come to Yogyakarta and behold on this masterpiece.
Temple Raiders,
Sky and Summer
Facebook Comments
No comments yet