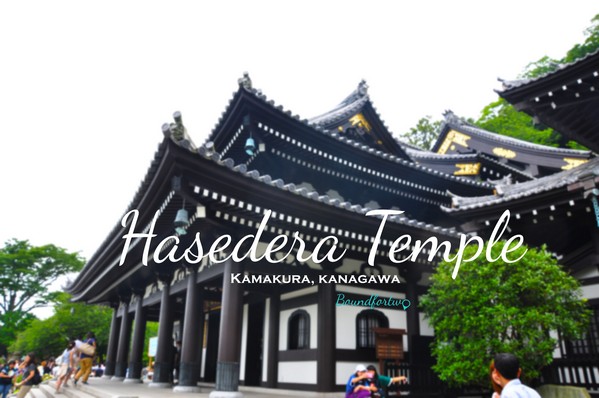 The ataractic view of Hydrangea path lured me on last minute to travel to Kamakura in a dash on a Saturday noon. It took me about 90 minutes from Tokyo aboard the train via Odakyu line to Kamakura and less than 20 minutes to reached Hasedera temple complex. A fleet of buses unloading guests at the complex continuously while I blended in the horde.  With the crowd of this magnitude, this place must be something of a  spectacular. I gallop my way at the gate and pay 300 Yen for the entrance. The friendly guest reception handed over an entrance ticket and queue number for Hydrangea path.

Hasedera Temple complex is not that huge what I expected but the  beautiful landscape makes for it.  This temple is one of the many Buddhist temples in Kamakura Kanagawa. It has a total of seven buildings, with an overlooking view of  Yuigahama and sits halfway up of Kamakura-san.

Upon getting in,  a beautifully manicured zen garden  will excite anyone who loves Japanese garden landscape.  Different type of flowers that blooms in summer arranged in harmony with bonsais at the background. A medium size pond which houses the colorful Koi that attracts every visitor’s attention.

There are thousands of Jizo statues located at the ground of the temple complex. These are placed by parents mourning offspring lost to miscarriage, stillbirth or abortion. I witness some family say a prayer  and offered some flowers before placing a Jizo.

The Kannon-do Hall  houses the massive wooden statue of Kannon with a height of 9 meters and has eleven heads in addition to the main one. Each face has a different expression which represents the deity listens to the wishes of all types of people.

Inside is a rotating book rack called rinzo. It is where the important Buddhist sutras for the temple are kept.  By turning the rinzo, they said they you can earn the same merit as from reading all the sutras.

The gigantic bronze bell housed in a thatched-roof looks ancient but casted three decades ago. Following the  Buddhist tradition the bell is rung 108 beginning around midnight on December 31 each year to dispel the 108 sufferings of humanity. This ritual is called joya no kane.

I’d encountered the Goddess of Mercy numerous times in our travel.  It’s called Guan Yin in southeast asia or known as Kannon in Japanese where the main hall of Hasedera is dedicated to. Believe to be widely most beloved Buddhist divinity with miraculous powers to assist to all those who pray to her.

Ajisai and View of Sagami Bay

There are several kinds of Ajisai or Hydrangea can be found round the temple complex. Actually there is dedicated area called Hydrangea path which one need to queue in order to view the pretty blossoms of this flower. Another spectacular not to be missed here is the panoramic view of Sagami Bay. A breath taking scene to look at.

It is best to visit this temple during Summer time where the seasonal flower of Hydrangea or Ajisai in Japanese is in full bloom.