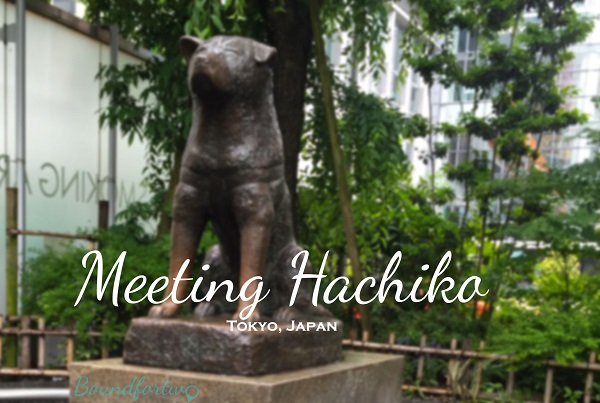 Would you travel to Tokyo just to see the dog?  YES, our subconscious responded.  A random question plays into our mind after watching that tear-jerking movie Hachi: A Dogs’s tale. We didn’t know how famous he was until we google it and surprisingly bump to picture where we saw his imposing statue. Then,  we include Meeting Hachiko to our 40sh list to tick off.

By the way, Hachiko is not just a color brown  Akita breed dog immortalized by a statue at the exit of Shibuya station. Hachiko is a symbol of loyalty and fidelity. Hachi is steadfast even after the death of Professor Ueno (played by Richard Gere) and was waiting for several years at the Shibuya station for his master’s return.  If you haven’t watched the film. Please do yourself a favor.

People flock to his small monument just outside Shibuya station which is also near to Shibuya Crossing.  Adored fans, offered flowers, messages, and sash honoring the famous Akita dog. We visit Hachiko not because we’d been told by Trip advisor but because of admiration. Which inspired more to be loyal to each other. Aside from that Hachi means 8 in Japanese, a symbol of infinity. Probably his master knows he will be loyal to infinity so named it Hachi.

Hachiko draws a crowd from all over the world and everyone would like to get a photo souvenir of the famous dog. So do we. This ticks off one of our 40ish list.