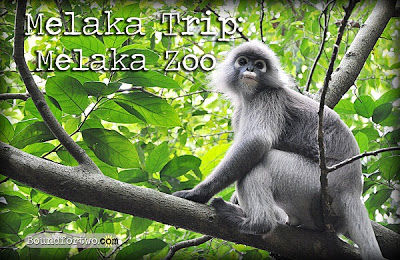 12:00 29/4/2012 After we said our prayers in St. Francis Xavier Church and had quick glutonnic affair on our last day in Melaka. We’re half exhilarated half anxious as we’re back to road tripping. If you recalled (link here) on our first day on the road, getting lost were bit a norm. Oops, it did happen again on the second day. We had passed the Melaka Zoo and reached as far in expressway going back to KL. Yeah, luck wasn’t really on our side during that time. So we took U-turn and  carefully look for a sign board guiding us to Melaka Zoo. Then we spotted the welcome board along  Ayer Keroh Highway. Finally, we arrived at our last destination of our Melaka Trip itinerary. 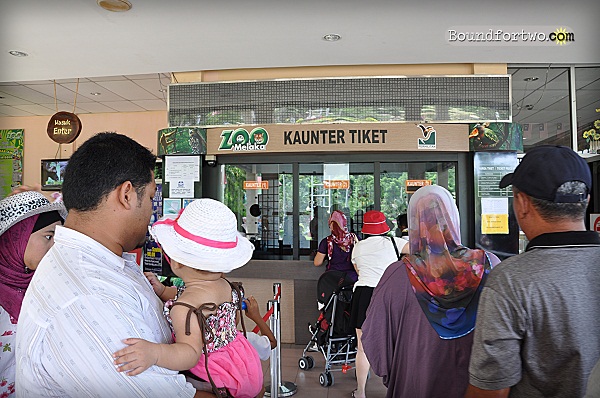 So why a Zoo? We could have spent our last day at a nice resort or do an adventure like cart racing. But we skipped them all and had favored the zoo. Because we haven’t visit an actual one. It was our very first time to enter in a real zoo. So our kindred kiddo spirit had awaken and we’re very enthusiastic comparable to that of a  kindergarten zoo excursion first timers. 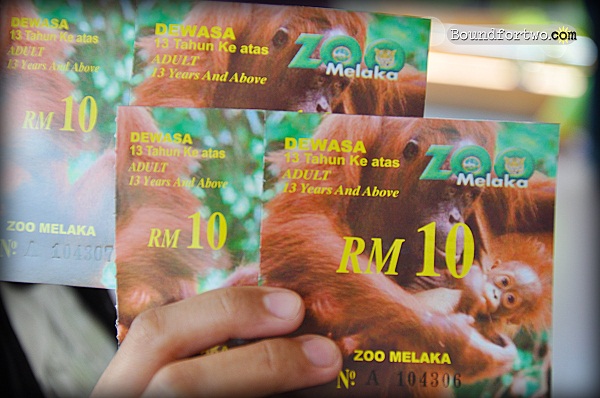 We paid RM10 for the entrance and this will be good to roam the whole 22 hectares of an animal sanctuary. Though they have an available tram but we opted for a walk, for an unrestricted tour around the zoo. We didn’t mind the queue and waited for our turn to enter the premises. 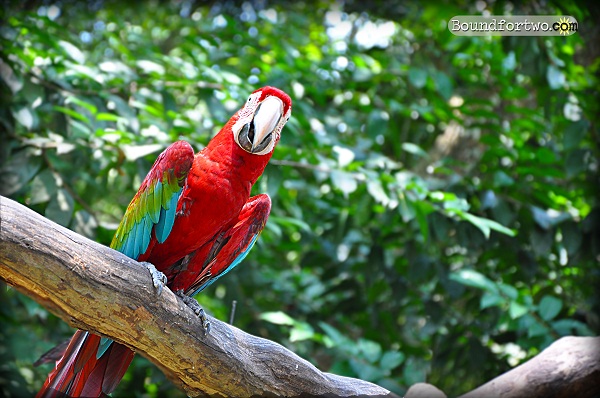 The Green Winged Macaw greeted  everyone near the entrance and  made random movements to capture one’s attention. We’re expecting the bird will talk, but got dismayed. We even tried to teach the bird some words but we kept ignored. Before  we realized they are types who’re not good in mimicking unlike their cousin Parrots and Mynas. Other than random tricks on the tree, this bird still amused us with his sparkling bright multi-coloured feathers flashing with all his might to be noticed. 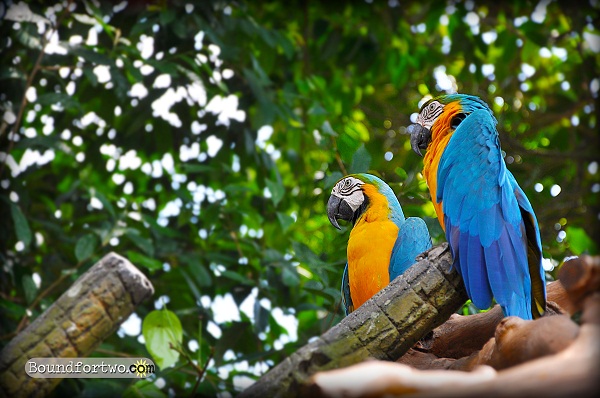 Then our eyes shifted to the Blue and Yellow Macaws whose undeniably cam whores. You got it right, every time we snap a photo of them they cooperate and strike an undaunted pose. Artista Much? They are really a sweet couple and always keep near to each other. Macaws were known to be monogamous and it’s their nature to only have a single partner for the rest of their life. That means they can celebrate their Silver, Gold or even Diamond anniversary as these birds can last up to 80 years. Before we bid adieu we’re waiting to witness if these folks can utter a word just like in the ad of a biscuit. Remember  “Kulot gusto ko ng crackers” but they’re too preoccupied taking a pose for other visitors. 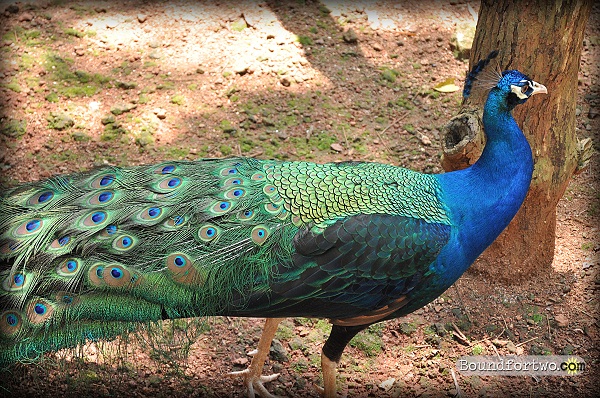 And when we saw a blue hue bird parading on the field. We can’t stop ourselves singing. “I wanna see your peacock , cock, cock your peacock”.  Maybe he didn’t like our song as he shooed away and disregard our Katy Perry’s rendition.   Wow! Trying to get the attention of that juvenile female on the same field. We thought of witnessing a peafowl mating ritual any time but female seems to ignore the cock, I mean the peacock. 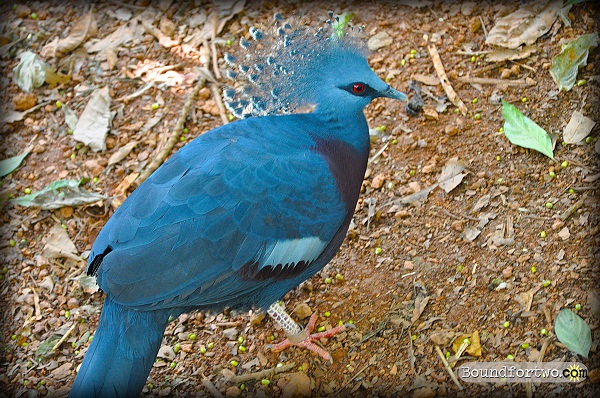 Then we saw another blue bird but this time a different specie, Blue-Crowned Pigeon. This bird seems to be a snob  and  doesn’t like to be stare, shy type eh? 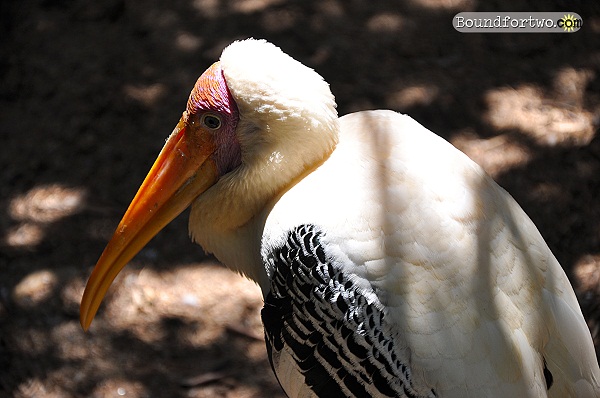 A large wading bird, with down curved tip yellow bill took stayed in the middle of the huge cage, contemplating maybe of his next great escape. We can’t help but felt awry looking to his demeanor. Maybe this Painted Stork got already tired of their routine life in the aviary, we thought.

The Doe and the Stag 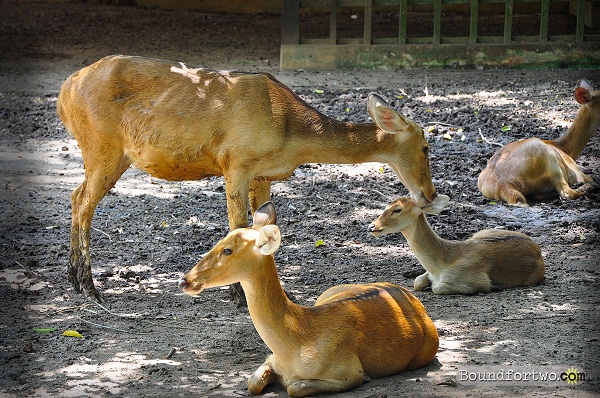 The Swamp Deer or locally called Barasingha in India we’re on the verge of extinction. But had been prevented as this specie had been carefully monitored. Sad to say we haven’t seen a stag, we badly want to see its striking 10-14 tines on its antlers. 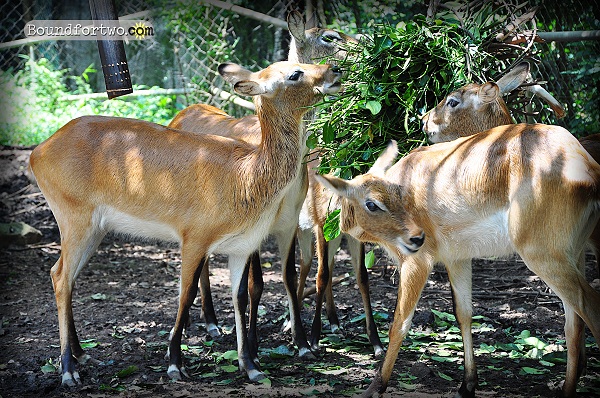 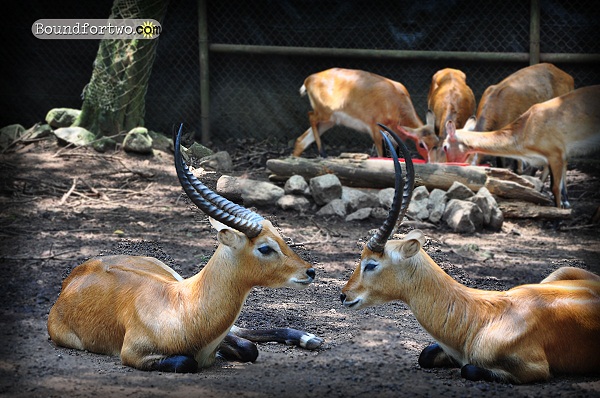 While their male counterpart had taking their siesta or should say intimate moments. Bromance? lol. The long spiral structured horns were really fascinating. The tip of the horn were kinda sharp, so play chasing game with them is not a good idea. 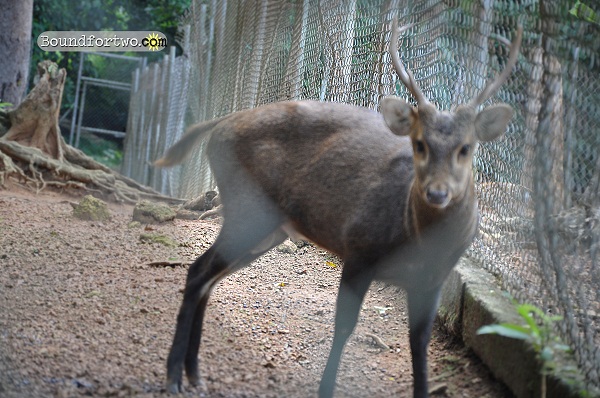 This cute Axis Deer had been staring us for more than 5 minutes. Can’t think of any reason why he gave us that auspicious look. We realized he just want to be pictured before it shun away. 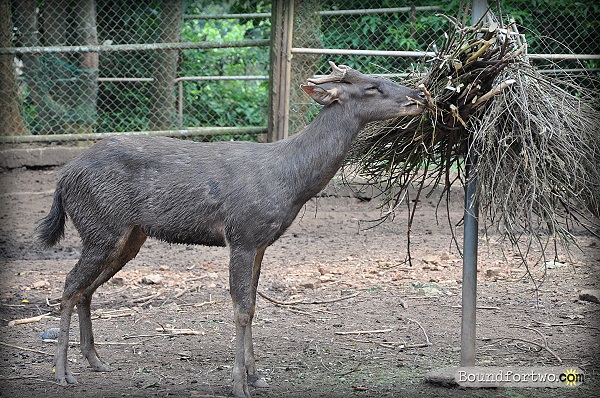 The Shaggy coat of Sambar Deer makes it unique from the family of deers that we saw in Melaka Zoo. This subtle creature made us wanna give him a big hug, if we’re allowed though. lol 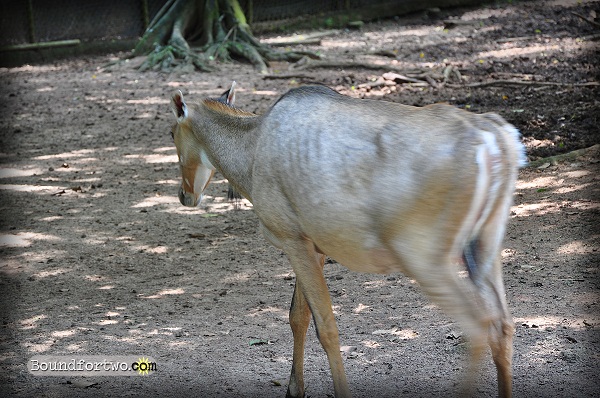 Nilgai or Blue bull is touted as the biggest Asian Antelope. The cow/deer like which is commonly from India had its grey-bluish coat that makes them peculiar. And because of their cattle like appearance, they considered as holy in India which protects them from hunting. 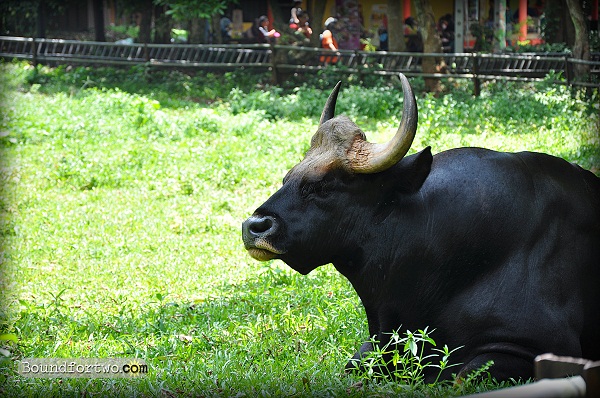 The Malayan Gaur or known as Seladang in Malay is native gaur in Malayan peninsula. This big bovine had been considered vulnerable to extinction and it’s currently monitored and protected. At that time of our visit, this massive mammal took a refuge underneath a tree which gave us that chance to take a look closely. 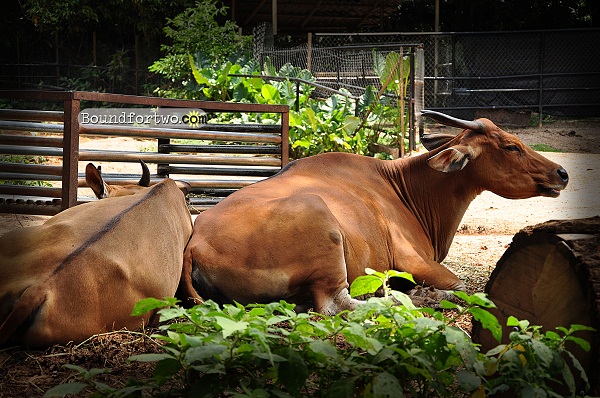 Banteng or Tembadau are wild cattles that had been domesticated in Southeast Asia. Good thing this duo were enjoying their afternoon siesta while their kin were busy plowing the fields or worst slain for meat production. 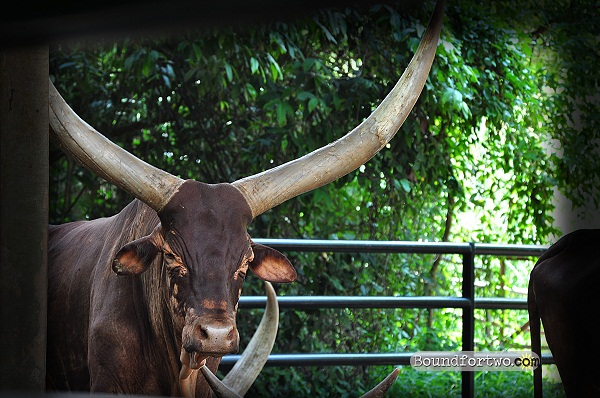 The long oversized horn of Ankole Cattle made them noticeable from a distance. Their horns can reach up to 8 feet. No wonder why people keep a relative distance from this long horned cattle. By the way, they’re domesticated and native in Africa. 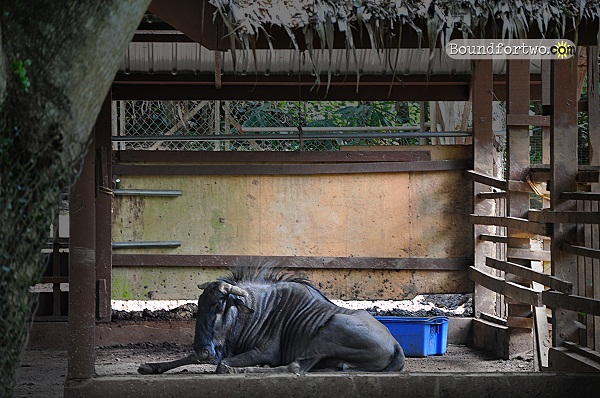 The Blue Wildebeest had stayed away from his solitary confinement. For sure this guy had missed his kin folks in the African Savannah where they usually migrated in herds 🙁

It was great to see the actual cast of Madagascar 🙂

The timid Zebra that been  keeping a distance from spectators and the near threatened White Rhinoceros wallowing the mud.

The Giraffes enjoying the shade while staying in  their cage pen. We want to see  them freely roaming around and probably got a chance to feed them. But unfortunately  they just stayed in one location for the whole time being we watched them. 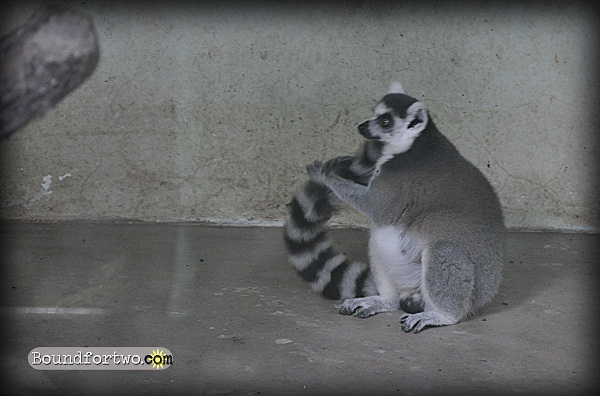 Remember the self-proclaimed King Julian? The Ring-tailed lemur who fell in love with Sonya the bear on Madagascar’s 3rd installment. This animal was innocent looking and charming but when it got the chance to escape from the cage. We had been chased and run like a madman to get out fast from the big cage and realize that wild animals have a tendency to be hostile even they had an experience human encounters. Whew!

We haven’t expected that Alex (Lion in Madagascar) was sluggish in real life  in contrary to his role as a hyperactive adventurous character in the movie. The big Lion was just sleeping and wouldn’t budge even the crowd cracking some noise.

Since it was our first time ever to enter in a zoo, and Melaka Zoo was able to fulfilled that childhood wish to see these typical animals in our own eyes. 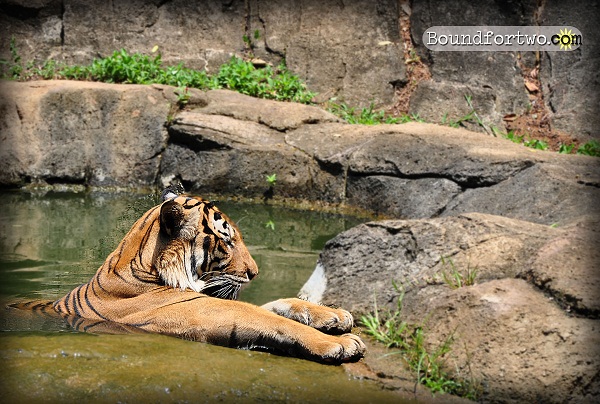 While Alex’s cousin, Tigger was busy soaking on personal tub. The Malayan Tiger is native to the peninsular Malaysia and these big cats can still be found in the dense jungle of Taman Negara. 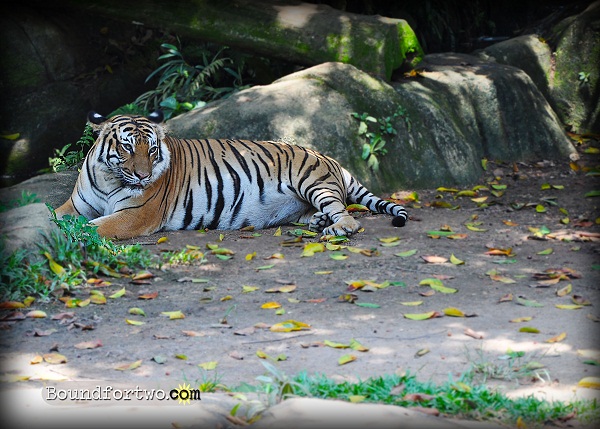 These Tigers were currently endangered that’s why the Melaka Zoo and other organization had imperative efforts to protect and preserve this creature. They’re not only protecting the legacy but the national icon as well. You may notice, from Cars(Proton), Bank (May Bank), and Coat of Arms, Harimau Belang as they called have logo or emblems on it. 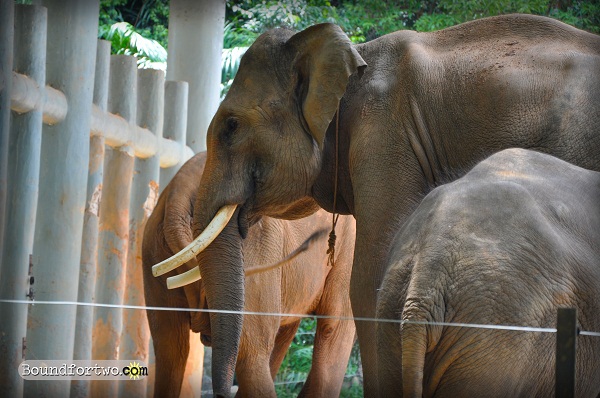 We also see the biggest mammal on the land, the elephants. We could tell it’s Asian elephants by just looking their ears. Asian types have their ears shorter while their African cousins have longer and reached over the neck. We’ll share our unforgettable experience with these land mammoths on a separate entry.

Have you seen ca capybara? 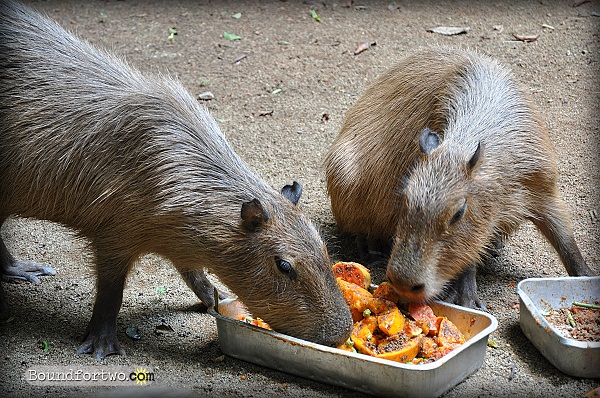 Is it a rabbit or a pig? No it’s Capybara. We had been surprised to see these large rodents in Melaka Zoo captivity. As I usually saw them in the Amazon, in Brazil featured in Nat Geographic channel. Somehow these two guys were lucky and had spared their life from the threats of the Anacondas. 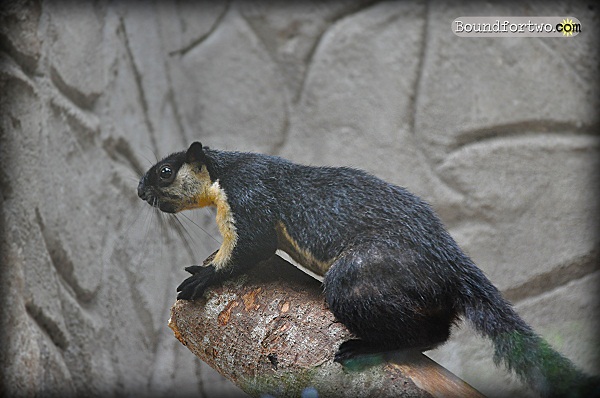 Another animal that caught our attention was this Black Giant Squirrel. A squirrel that is  native in Malaysian forest canopy. Though the cage has a trunk of a tree, duplicating of that rainforest, we could tell this animal missed the real habitat. Sad looking right? 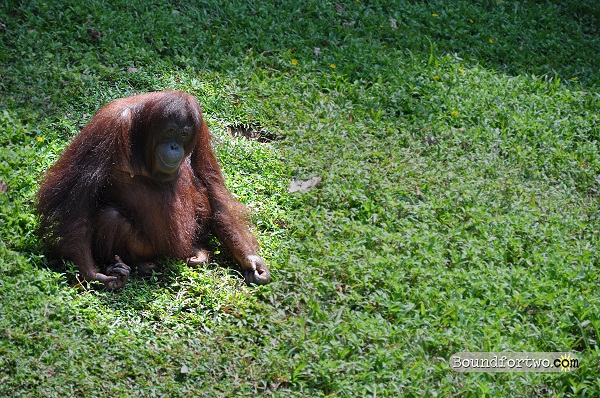 The Orangutans made our Melaka Zoo experience more memorable. We witnessed them doing some circus type acrobats without any human intervention. They showed off their talents without expecting in return.

We capped our day with biggest smile on our face and will promise to visit Taman Negara  and elephant sanctuary in Pahang. We’ll surely recommend  Melaka Zoo if one looking  for Nature Trip and want to see the vulnerable and endangered species in the world.