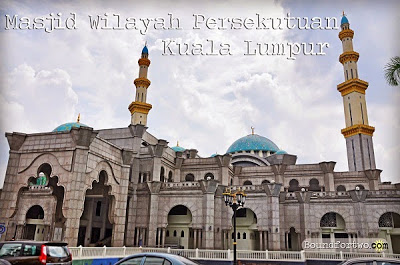 14:45 14/7/2012 Exactly just a year ago, after accompanying Summer to visit  at her work place, we dropped by to one of the largest mosque in Peninsular Malaysia, the Masjid Wilayah Persekutuan (Federal Territory Mosque). Getting there wasn’t that easy since there are no public buses passing along this five hectare site during weekends. We hailed a cab and travel less than 10 minutes from where we started. We opted to take a cab since we don’t want to get lost and the road leading to this mosque is not pedestrian friendly. The moment we alight from the cab, we look dumbfounded upon seing it. Same experience we had when we visit the Pink Mosque in Putrajaya.

Federal Territory Mosque is situated near Federal Territory Government Complex in Jalan Duta, Kuala Lumpur Malaysia. The blue dome mosque can accommodate up to 17,000 worshippers at any one time. 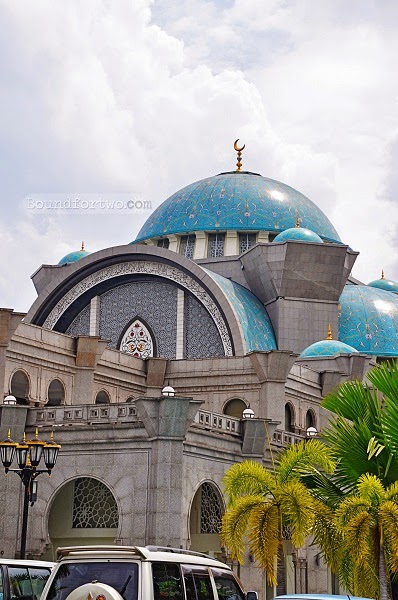 Masjid Wilayah Persekutuan (Federal Territory Mosque) looks so grandiose from a distance and much more getting closer to it. I can’t help but notice and compare how parallel it could be with Masjid Sultan Ahmed, the famous Blue Mosque of Istanbul, Turkey. The Turkish or say Ottoman architecture of this mosque is very obvious.
Our curiosity lead us in visiting the official website of this mosque. And found out that it has been patterned of that world renowned Blue Mosque of Turkey. Not only that, it’s Dome is almost same as with Masjid Imam of Isfahan, Iran.
Visiting Masjid Wilayah Persekutuan is like touring different and notable mosques in the world. We’re unlucky upon visiting this place, during an event, so weren’t allowed entering inside the mosque. 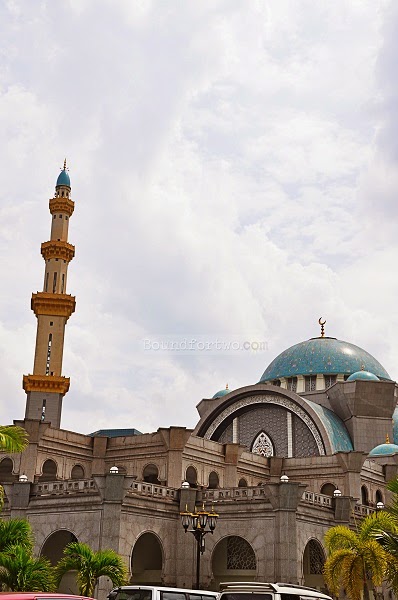 We settled and enjoying its spectacular view from a distance. Dreaming we just visited that Blue Mosque in Istanbul, Turkey. Sigh! 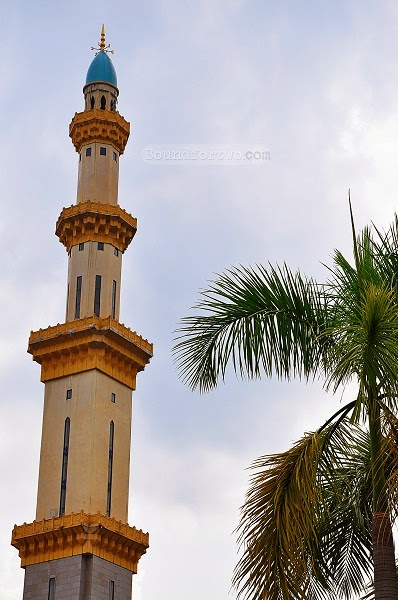 We walk towards to one of it’s minaret and look above on this massive towering structure. It can’t be deny the minaret is inspired to that of Masjid Nabawi in Medina, Saudi Arabia. This mosque is built by so many inspirations with astounding mixed of Turkish, Persian and Malaysian architecture. 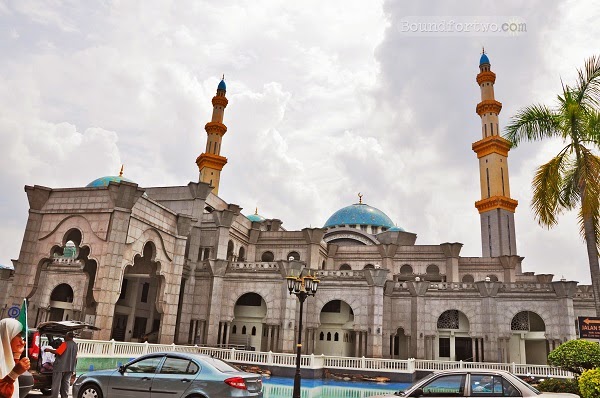 A quick visit to Masjid Wilayah Persekutuan is not enough and we would definitely see it more closer and explore what beneath’s inside. Perhaps, a second look would be a lot better.