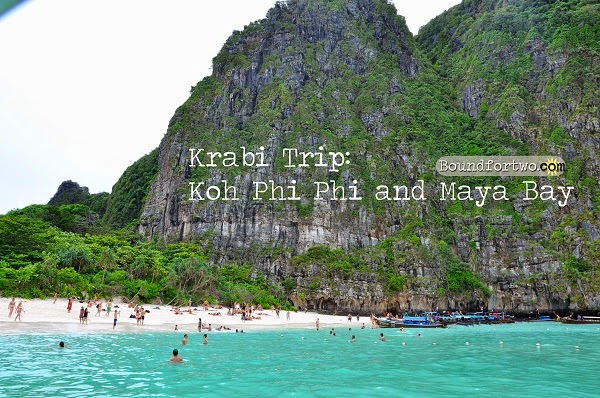 11:20 24/11/2013 We’d been  on hiatus in blogging starting the year end till the first month of 2015. We’re not even on the road frolicking like our travel buddies. Wanna know what keep us preoccupied these days? Damn, blame it to Clash of Clans! Also known as COC. This game is effing addictive and we both consumed to it. Expend and deviating our normal life. Anyway, this post is not meant spouting how to get hooked on that game. It’s about a fulfilling a long time dream vacation of that tranquil secluded beach that wowed the whole world,  Maya Bay in Phi Phi Island. Thanks to the movie, “The Beach”.

Heem (our tour guide) jovially announced that we’re heading to Maya Bay. Everyone on the boat showed grin on their face. While us reminiscing the movie of it’s picturesque view of karst hills dotted with random foliage, turquoise blue clear  water, and famous line of Richard ( Leo Di Caprio) “It really was some kind of paradise” that eternally painted to our minds. 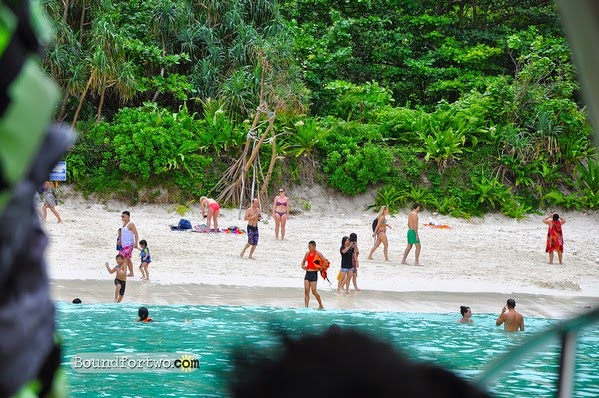 Two hundred meters from the shore, Maya Bay  showed herself delighting all of us on board. It was a surreal feeling, never  had we’d imagined to come this far. 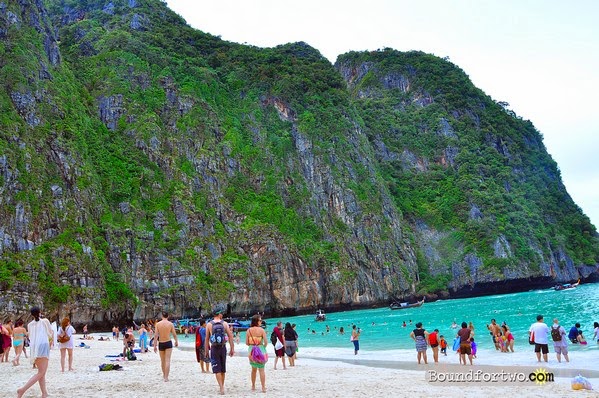 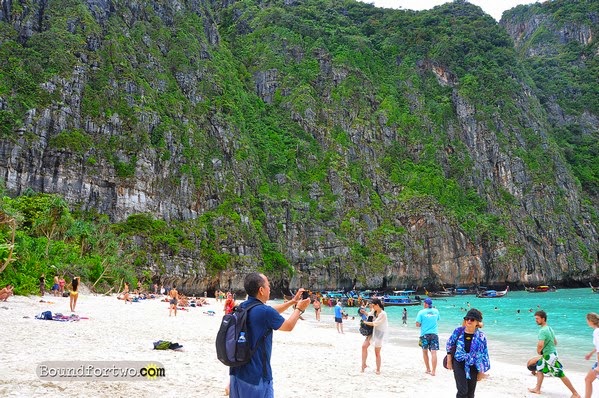 Everyone was still on euphoric state, surrendered to the mesmerizing beauty of Maya Bay. The promise of fine white sand, crystal blue water, mammoth karst cliffs  enveloped the bay is indeed real. 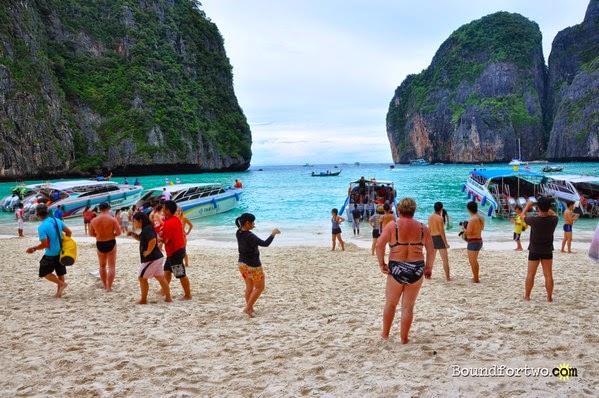 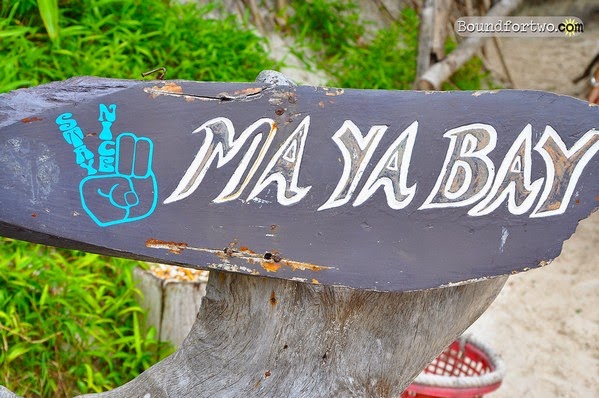 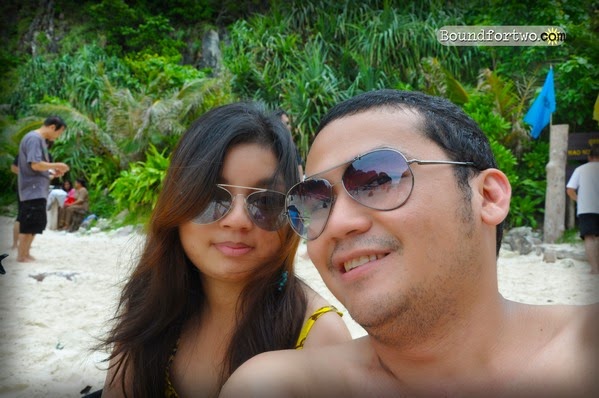 Most of the crowd  took profuse photos as a memento on this beautiful island. Of course, we did the same. A souvenir that we can tell a tale to our future kids. Once upon a time …. blah blah. 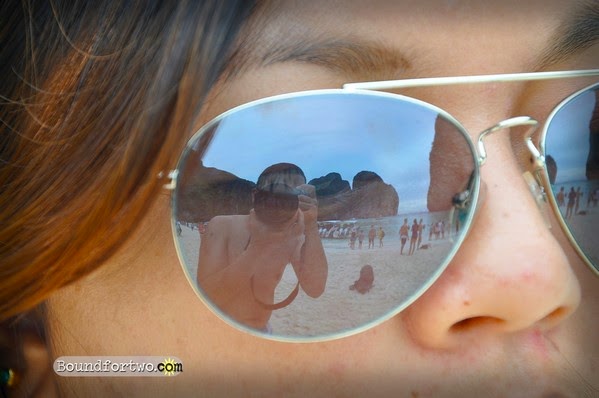 We explore the surrounding, imagining the same moment when Richard and Francoise gambol at the Beach. We followed a trail  covered by silky white sands which led us to manicured garden. We thought of exploring farther in a forest. But again our paranoia of being left kicks in. So we ditched the idea and go back to the shore close to the speedboat. 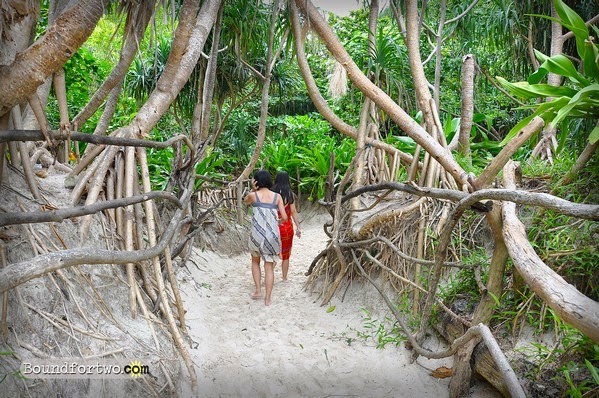 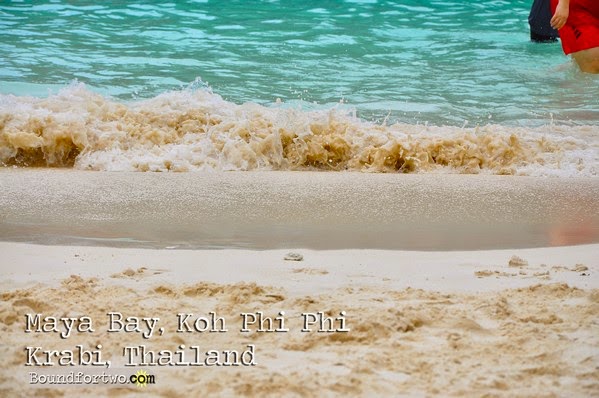 An hour had passed, Heem had the roll called. Frantically we head back on the shore resisting the waves to embark on our boat. 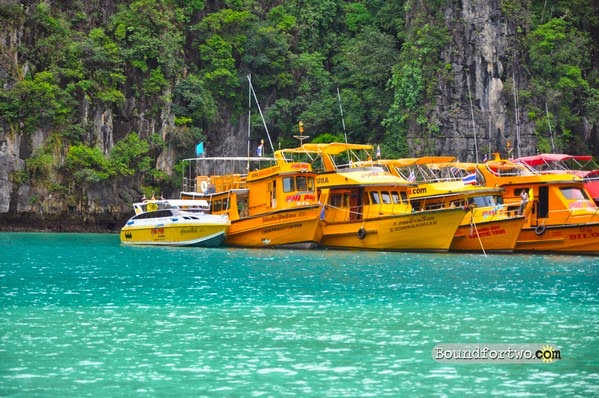 After some few minutes, a row of yellow and some speed boats was sighted near to an island. Out of curiosity, one fellow inquired about its unusual presence. Heem explained, those boats took shelter from yesterday’s storm which made the tourist stranded. It was then blessing in disguise of not pursuing an island tour on our first day. 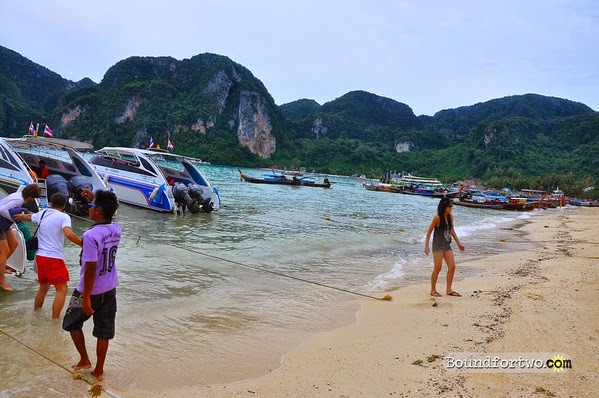 We arrived in Koh Phi Phi Don ( the largest island of Koh Phi Phi Island group just on time. Most members on the tour (including us) were starving. All went to restaurant and head straight to second floor which a buffet of food was waiting. 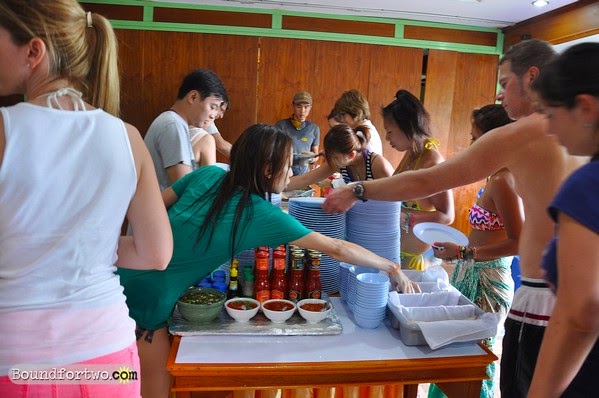 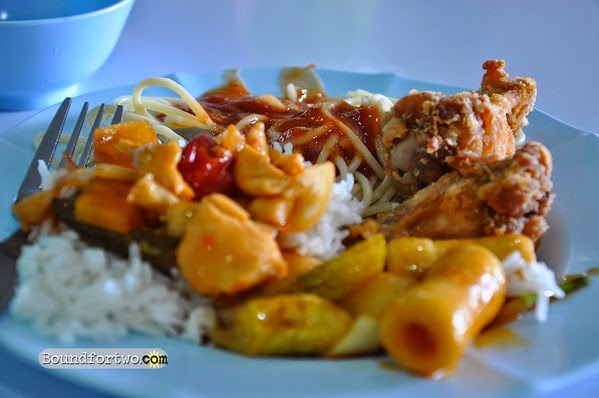 They served a mixed of Western and Thai food, fresh fruits, and overflowing Ice Tea. The food wasn’t that bad neither great. Just enough to fill our hungry stomach. We chow down so fast , to pave way for other tour members. Then went ahead  and meander to retail shops adjacent to the restaurant. 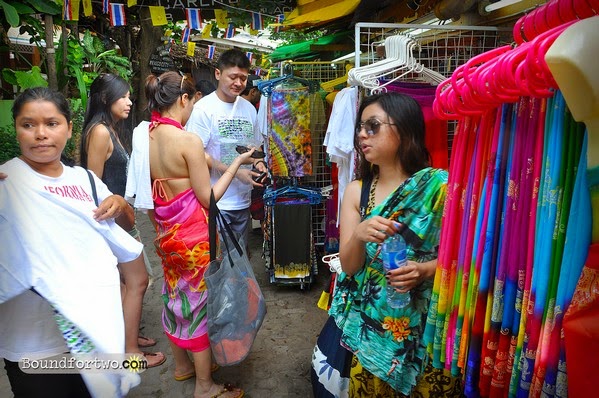 We checked some souvenir items but  didn’t manage to buy any  item. Most of the merchandise are overpriced. We thought of just buying it in Ao Nang, same stuff but 30-50% cheaper. 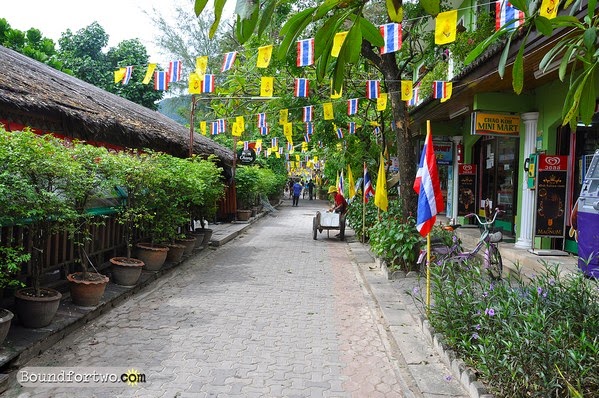 Earlier a bunch of baggage carts moving on opposite direction made the street busy. Now it was almost deserted.  We followed the long street and halted near to a monument. 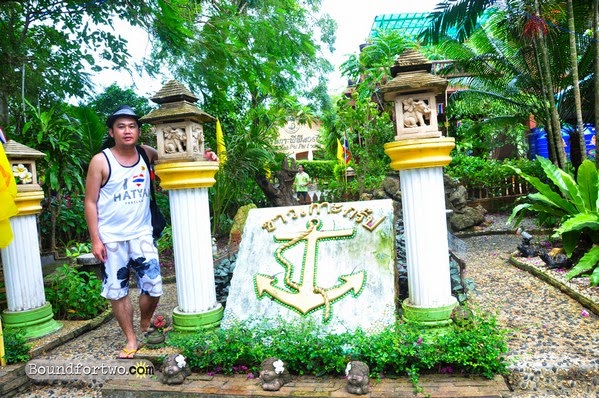 An anchor monument? Perhaps, it was surrounded by a beautiful garden. Before we could go beyond, we saw our group heading back to the shoreline. We follow their lead and stayed close to them. There we laid our Lagu sand repellent beach blanket, reapply some sun block and wear sunnies. Time to go back to our business,  observing people. 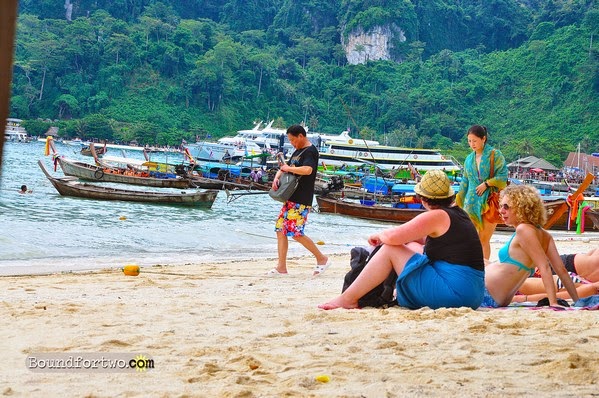 Siesta on this beautiful island was in our thought. That moment we didn’t mind  being left. Because we’re a foot away from where Heem anchored the boat. Unlikely he could miss us right? 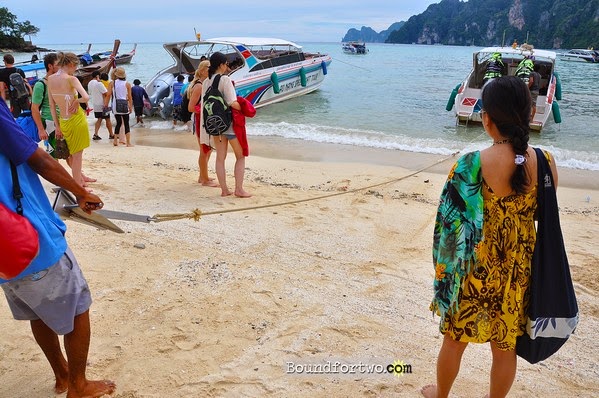 After half an hour, the boat captain appears followed by Heem. Now we’re ready to proceed on our next water activity, snorkeling at the Andaman Sea. 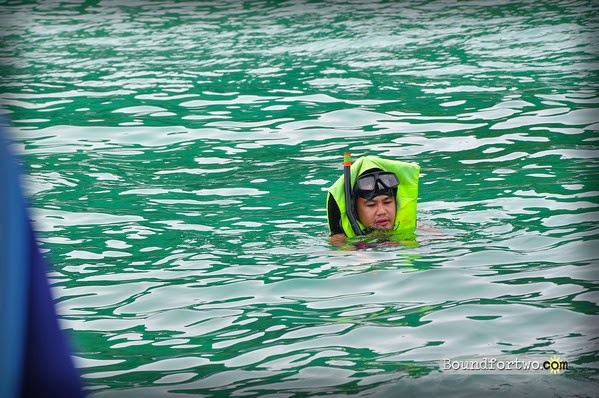 Sky brave himself and  tick off one of 40ish list #3 Snorkel in one of the pristine beach of Andaman Sea. You may read our epic noobish snorkeling experience on this post. 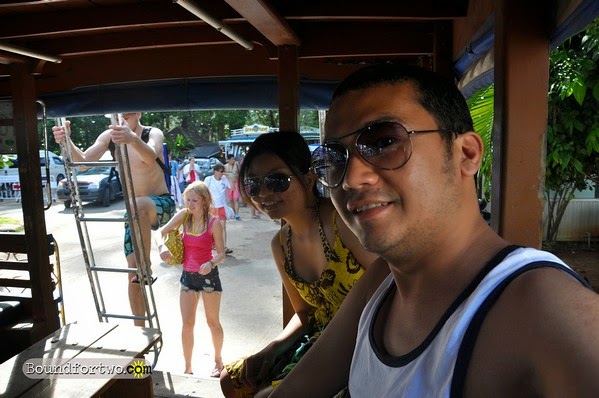 Our first day of Island Tour on Krabi was indeed remarkable. Overly ecstatic filled with unforgettable moments that is forever deposited in our memory banks.
Beach Bummers,