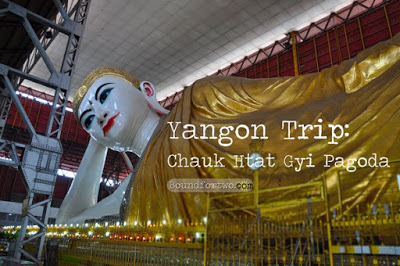 12:35 01/05/2014   “Cha-uk ta-at  gi-yi” verbatim as it should be, that’s how we uttered the little famous pagoda to the taxi driver. He responded a bewildering look and silence. We keep on repeating the word hoping he’ll eventually get it but only mustered us with a smile. Great! Deep sigh! As a last resort and out of desperation we pulled out our smartphone.  Seeking help to mighty google not minding the exorbitant roaming data charge will incur. Somehow the photo of the gigantic neat looking reclining Buddha do some magic on his face and finally, obtain his nod.

Just less than 15 minutes we arrived at the least visited pagoda of Chauk Htat Gyi. Two huge pairs of Chintes lion-like creatures and the golden multi-tiered roof welcomed us from the entrance. 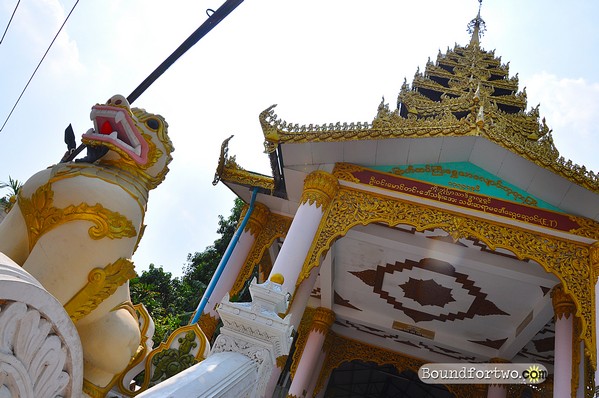 We’d been told to take off our shoes and walk towards the temple bare foot This is a most common practice to most temples be it in Hindu or Buddhist which we normally oblige without resistance.
The path walk is tiled and was covered with roof supported by pink columns adorn with gold design. We notice people walks through the black tiles side going to the temple while people leaving went on the white tiles. Hmm! Probably once you went inside you’ll be purified then have to walk on the white side. Hey! we just come up of that assumption as we’re too curious. 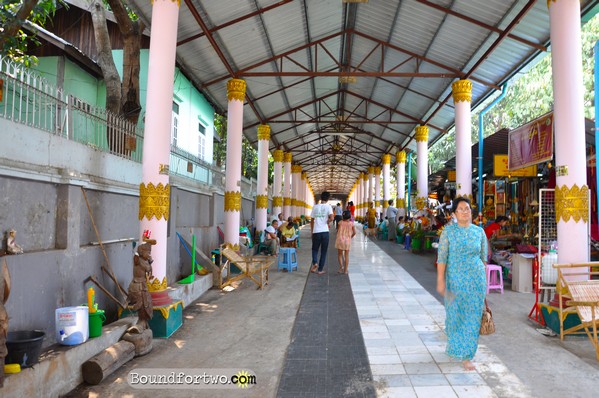 Along the way lot of shop that sell souvenirs, Buddhism beads, Monks cloth and random trinkets. There is a sidewalk eatery as well which most locals have their lunch.

As we stride inside the temple, we paused for a moment and just gazed to this mammoth beauty.  We’re totally consumed to it’s enormous and mesmerizing presence. 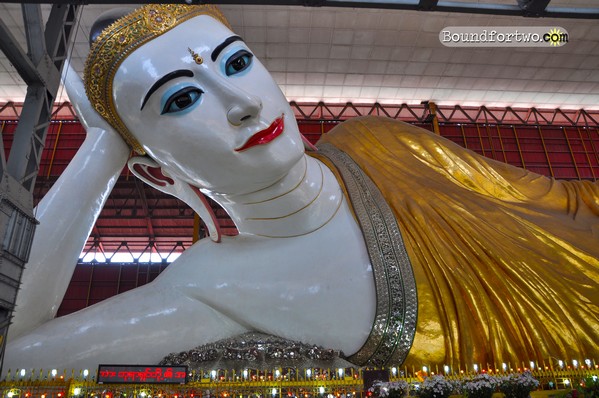 We saw four colossal structure like these before, all has it’s own distinct feature.  An all gold plated of Wat Phranon Laem Pho (20 meters) in Songkhla , flesh colored monstrous  of Wat Hat Yai Nai (35 meters) , gentle looking of Wat Chayamangkalaram ( 33 meters)  in Penang, the famous glittering golden of Wat Pho (43 meters)  in Bangkok and now this white skinned gargantuan of Chauk Htat Gyi at Yangon Myanmar with an astonishing 66 Meters in length. So far this is the biggest reclining Buddha we went to. 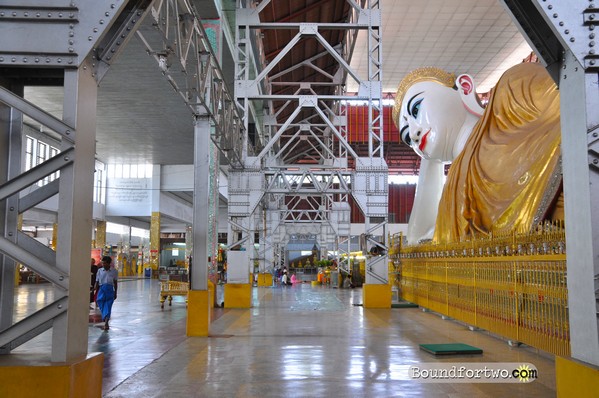 We can’t help but felt dismay on the support steel frame covering this beauty. They could have designed it not as obstruction. Anyway it doesn’t diminish our appreciation on this giant sleeping Buddha. Just wish they could do something about it in the future. 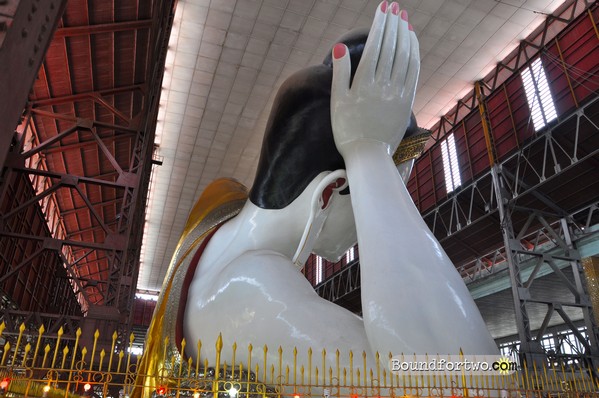 The big structure is protected by a golden fence that looks like a spear connected to each other. The image looks so calm and gentle  with remarkable facial features. 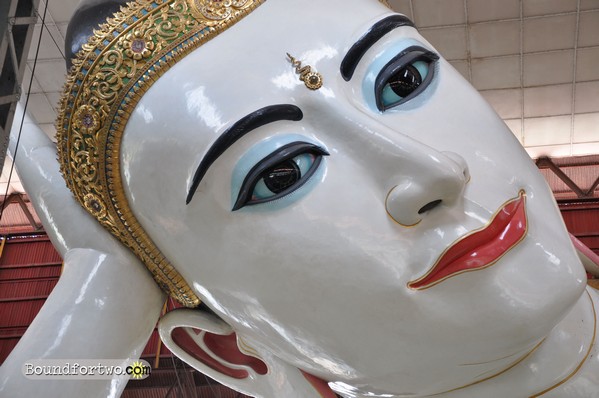 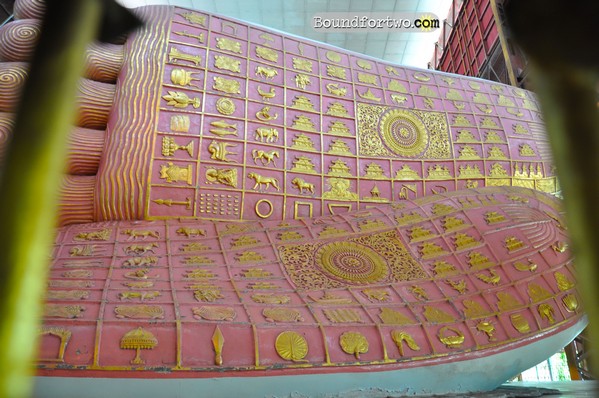 The foot indicating the 108 auspicious symbols of Buddha. It is quite similar to what we saw in Wat Pho in Bangkok. 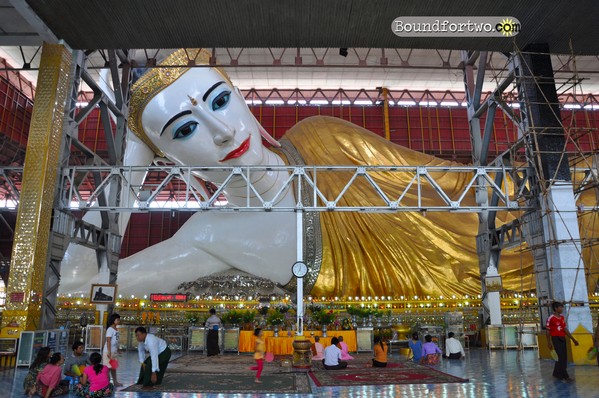 Devotees are scattered within the temple saying their prayers. Some offering flowers while most are squatting down escaping the fierce heat outside. We joined them and exchanges some smile as talking deterred us.
We’re quite surprise seeing monks wielding smartphones and took photo of them selves with the mammoth Buddha as background. Why not? 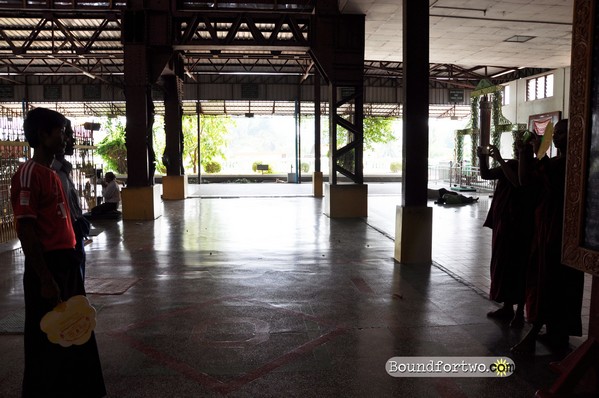 Since it becomes a fad at the premise, we follow their lead and took a souvenir for ourselves. Sky rolled on the floor and collected some dust on his face. Kidding that’s  Thanaka, a kind of paste where Burmese put on their face which has a cooling sensation. 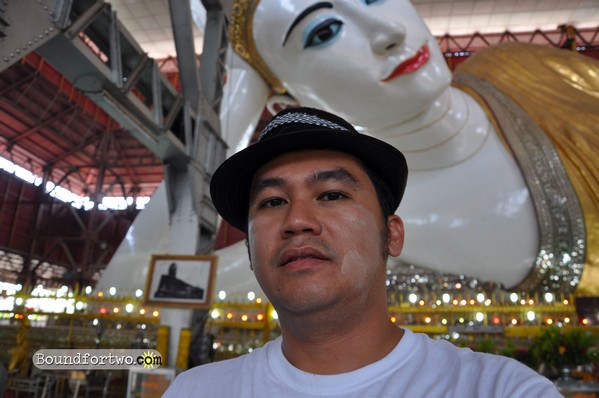 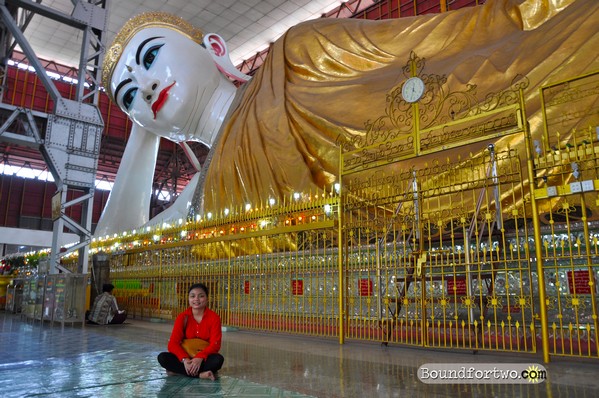 We stayed here longer than we spent at Shwedagon pagoda. The calmness of this places give us that positive vibe and relaxing disposition. This temple is less visited and only locals crowded here. When you’re in Yangon, pay a visit to Chauk htat gyi,  it’s worth of your time.
Temple Raiders,
Sky and Summer
Facebook Comments
No comments yet