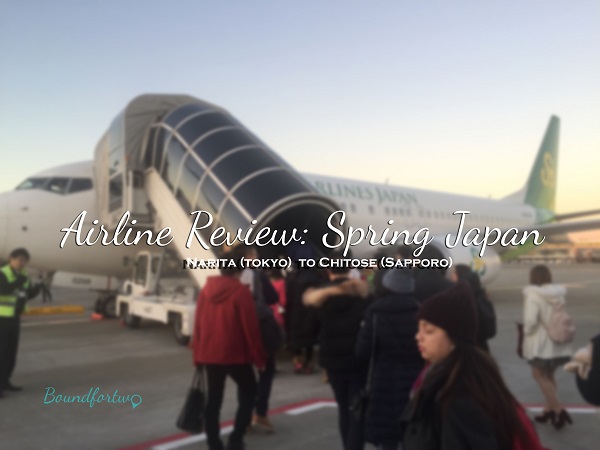 Moving to Japan brought as many first in our lives. Our first Autumn, Snow and the list goes one. Adding to that list would flying a budget carrier on a domestic flight in the land of rising sun.  For starters, we’d always used budget airlines for most of our travel. Cebu Pacific, Air Asia, Tiger Airlines, Jet Star had been our companion. After we decided to fly to Sapporo during the Christmas season, an early Saturday morning flight would be a must. After several searches from Google flights and Skyscanner, we landed on Spring Japan. Their early morning flight to Sapporo is perfect for our weekend travel plan.  Plus the airfare is relatively cheaper than Jetstar. No brainer we choose Spring Japan Airlines.

A minor hurdle of taking an early flight at Narita would be the train accessibility. Early trains would only be available at 5 AM onwards which would be a little bit late for a 7 AM flight if coming from Tokyo. Though Taxis are available but we don’t want to spend Y 25,000 which is more expensive than our roundtrip flight to Sapporo. Staying in a nearby hotel is not our option as well, you know cheapskate. So we end up going there late at night and camp at Narita Airport.

There are comfortable couches and a dedicated sleeping lounge near to the pre-departure area. But we stayed on a couch near to Spring Airlines counter to get way ahead in the queue.

Spring Japan airlines counter opened at exactly 2 hours before our scheduled domestic flight. It was a very smooth check-in and luggage drop experience by far. How? It started lining at the check-in kiosk ( they don’t have web check-in) where an airline staff will guide the passengers how to get their boarding passes. We didn’t fret upon seeing  Kanji characters on the screen since an option in English is available.  If one doesn’t have luggage check-in they can zoom straight away to the boarding gate. Otherwise if got a luggage one must proceed to the counter and drop the baggage. From getting the boarding passes to luggage drop it only took us less than 10 minutes. Quite organized and fast.

You might wonder why we have seated apart from each other. Well, we didn’t pay the fee for the preferred seat but at least they are kind enough to meet our request. Sky is on aisle seat while Summer is on the window seat.

The boarding waiting area is quite capacious which creates good space for the kids to roam around. Their airline ground staff are quite polite,  attentive and mindful of customer’s need. The boarding announcement is audible and clear enough for the passenger to acknowledge. The exact boarding time was observed and less no time all the people on board the bus for a transfer at the tarmac.

A short bus trip was required leading to where the aircraft is parked. We like how their ground staff was in control during the disembarkation from the bus to boarding the plane. It could be attributed to the good manners of Japanese people and properly trained staff of Spring Airlines. All of us got to our seat in no time. The cabin crew does the usual routine pre-flight safety demonstration which we did pay attention. Because it’s our first time to fly on a Boeing plane.

Spring Airlines Japan uses the Boeing 737-800 for this flight which is the new generation of the famous 737’s. It resembles with Airbus 320 but looks more spacious inside the cabin.

Since the plane is parked near the runway. In no time we took off from Narita at exactly 7 AM and heads toward Hokkaido, the most northern prefecture of Japan. The flight is smooth probably because of the good weather.  We landed breezily at New Chitose airport slightly ahead of the scheduled arrival time.  The view of snow mounds at the tarmac was a sight to behold for first timers in Sapporo.

The cabin crews are all polite and professional. They made every passenger’s flight experience pleasant which is commendable. We didn’t get a chance to try their service meals as we’re too excited to try binge food in Sapporo. Probably on the next journey.

Overall, Spring Airlines Japan meet our expectation for a budget carrier. The flights are on time, organized and professional staff and not to mention cheap fares. We recommend them for a domestic flight in Japan especially the Tokyo-Sapporo IJ661 flight.

If you had flown Spring Airlines, let us know your experience as well. Love to hear them.